At the Four Seasons Bora Bora 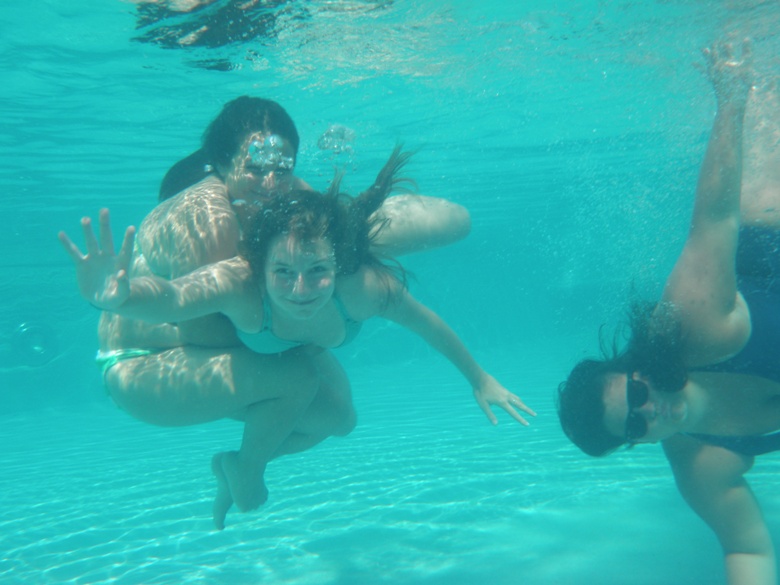 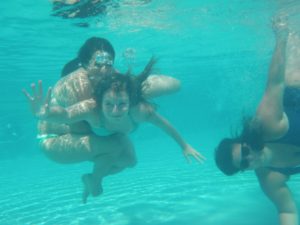 DAY 9 — Who says romance and kids can’t go together?

The operators of the Four Seasons Bora Bora (www.fourseasons.com/borabora ), just opened last year, are convinced they can, so they’ve built and run a resort designed for honeymooners as well as families here in French Polynesia. This has to be one of the most romantic spots on earth.

I’m sitting in an over the water bungalow, the ceiling fan whirring, with a thatched roof and expansive deck with its own swimming dock and outdoor shower? Did I mention that gigantic tub big enough for two with views of the lagoon as well?

But the other thing I should mention is that all of these bungalows are set up as suites with separate living rooms with pull out sofas and their own flat screen TVs — yes perfect for kids as well as canoodling couples.

And in true Four Seasons fashion, there is a first-rate “kids for all seasons” area for supervised activities complete with a water playground which shoots jets of water when the kids jump on it. The two Bollag boys are whopping it up as the fountain sprays. Their dad, Michael Bollag, said the family moved from another hotel as did Max and Tammy Darnell, who are from LA and here with their 3 year-old son and 7 year-old daughter. “We’ll go to another Four Seasons for sure,” said Darnell.

His wife was even more enthusiastic, saying not only is the staff accommodating but their daughter who typically isn’t a fan of resort kids’ programs, begs to go to this one.

Tammy Darnell adds that the kids are so spent by the end of the day that the family has been ordering room service to their bungalow. But that’s not exactly rough duty when you can eat outside overlooking the lagoon — and not have to cook or do the dishes.

Another plus to these spacious over-water bungalows: “I don’t have to worry about the kids making noise and bothering somebody below us or next door,” Darnell says.

At the kids club, there are Tahitian arts and crafts, coconut cracking, Tahitian dance lessons, fish feeding and more. But what I like is these activities are complimentary so that after parents are paying for an expensive resort, they don’t have to pay more. Nor do they have to feel guilty about grabbing a break for an hour or two. The kids can join the activities for an hour or three.

And around the pool (infinity, of course, with thatch-covered beach beds that are as terrific for a toddler to nap outside of the sun as for a cuddling couple), the honeymooners and the families seem to be coexisting happily. In some cases, the honeymooning couples are parents too. Don McClure, a Canadian, and Nihan Preslier, who is Turkish, got married here on the beach with 5 year-old Antoine Preslier part of the festivities. Their families are around the world, said Preslier, and the couple decided to do something special — just the three of them, combining wedding ceremony and honeymoon. And they couldn’t be happier with their choice. “It’s been great. It really works,” she says.

The kids playing in the pool as the honeymooning couples exchange notes on restaurants and excursions. The activities director, Fabrice LeFalher, a Club Med veteran, tells me next week he expects there to be more than 40 kids and teens here. Our group of 18-year-olds spend part of the afternoon goofing around in the pool, snapping great underwater pictures with our Olympus Stylus Tough 6000 (www.olympusamerica.com).

Did I mention the separate Teen Chill Beach with its lounges overlooking the lagoon, pool table inside a an air-conditioned rec room, foosball, computer games, Wii and more. This is a first for Four Seasons, says marketing manager Don Schreifels. Our four 18 year olds give the Chill beach thumbs up because they can play pool when they tire of the sun or the lagoon. All that is missing is a fridge with some soft drinks and snacks, they say.

Sure this is as upscale a resort as they come. “Definitely not inexpensive,” says Tammy Darnell. But her husband adds: “good value for the vacation dollar.”

And it’s nice to see families so welcome here — and so integrated into the fabric of the resort. I haven’t seen that at other resorts I’ve visited on French Polynesia.

“Most of my friends think we’re crazy to travel so far with the kids<’ says Tammy Darnell. “You can still do it — you just change how you do it.”

Besides, she adds, Tahiti is just a couple of hours farther than Hawaii, which is where Southern Californians like to vacation with their kids when they can afford the freight. “And there is something about this that’s magical.”

Next: Under the Sea on Bora Bora