At the 9/11 Memorial Museum with unique teen guides 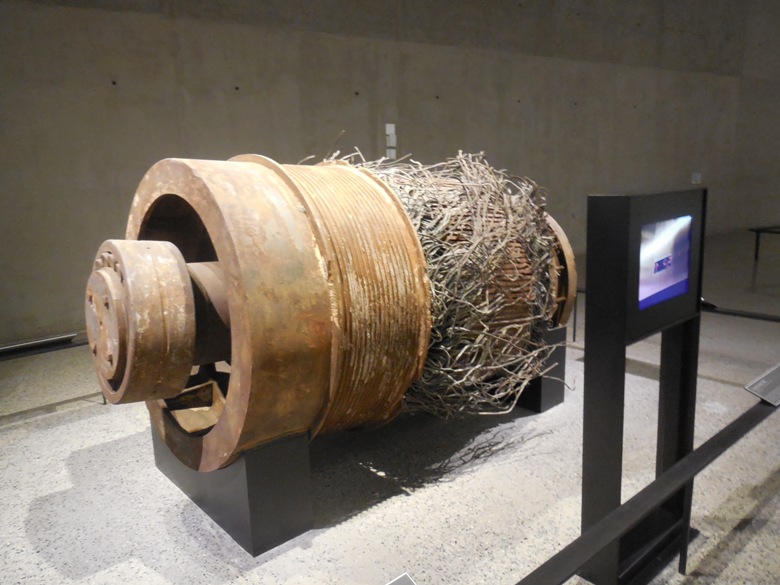 NEW YORK (DAY TWO) – They were barely out of diapers when it happened.

David Rothblatt has been a New Yorker his whole life but his sole memory of 9/11 was being with his mom as she searched for a store to buy milk.

“I remember all the regular places were closed,” he said.  It’s remarkable that David remembers anything as he was barely three that horrible day when his father’s best friend was terribly injured at the World Trade Center.

Fia Hargil, also 17, doesn’t remember much about that day—just what she has learned in school and from growing up in Brooklyn.

Today, the two believe that it’s important for those their age and younger to appreciate the gravity of what happened in New York that day—the worst terror attack in American history.   “It’s hard for kids to understand… but 9/11 has shaped the lives of our generation—it affects all of us and it is important to know what happened,” David said, “to honor those who risked and gave their lives for strangers… and all of those whose lives were taken for no reason.”

Fia adds that next year’s high school freshmen will have been born after 9/11.  “Kids need to know even if it is hard,” she and David agreed.

The two are among the six inaugural class of Teen Ambassadors trained to work with children who visit the new 9/11 Memorial Museum that opened at the World Trade Center this past May.  Since then, more than a million people have visited—13,000 just in December. The two attend Stuyvesant High School, just three blocks from where the attacks happened. The school served as a triage area.

On a recent rainy Saturday, they were tasked with showing a group of inner city boys the museum.  They attend our suburban high school under the auspices of a national program called A Better Chance.

The group agreed their visit was that much more meaningful because two of their peers—extremely knowledgeable after special after-school and Saturday sessions—led them.  “You can’t come to this museum and not leave a different person,” said Christopher Morales, who is from Los Angeles.

This area, with the opening of the museum and the Freedom Tower, is undergoing a much anticipated rebirth.  We go for lunch at Brookfield Place across the street with it’s trendy food court and ice skating rink outside and we’re staying a block away at the Conrad bustling with tourists interested in exploring lower Manhattan—a great bet for families because all of the rooms are suites.

At the museum, we see the only two works of art commissioned for exhibit — the 2,983 squares of different colored blue tiles by Spencer Finch—Trying to Remember the Color of the Sky on that September Morning.  Each square commemorates those killed that day.  David explains one project the junior ambassadors do with younger kids is have them make their own pieces of sky.  (There are free art activities for kids every Saturday morning and afternoon.)   There are Virgil’s words:  “No Day Shall Erase You from the Memory of Time”—crafted  by blacksmith Tom Joyce of Santa Fe NM from World Trade Center Steel.

“Each person’s life had a story,” said David. Indeed in the In Memoriam Exhibition there are pictures of each victim—young and old, all colors and religions.  Interactive tables enable you to find out more about them.

There are memorial quilts on display—part of the 15,000+  collection and a place where those who have first-hand memories can record them.  We hear some throughout the exhibits.  There is the piece of the mangled antenna from the North Tower, a partially destroyed fire truck—everyone who arrived on it that day perished, some of the 343 firefighters who died that day.  One of the survivors recalled, her voice breaking telling one young fireman not to go inside, that there was nothing he could do.  “It’s my job, Lady,” he replied.

There is a mangled elevator motor. It turns out that the World Trade Center was famous for its express elevators—the most advanced in the world.  Yet they couldn’t save those who were trapped after the planes hit.  One window washer, David tells us, managed to get a small group stuck in an elevator out by using his squeegee to pry open the doors and break through drywall. They all survived.

“No one thought those buildings would collapse,” David said soberly.  That’s why so many firefighters and police officers—441 total—died.    We see  the mangled Ladder Company 3 truck and walk beside  the Survivors’ Stairs – the one staircase not destroyed and see photographs of survivors stumbling outside.  The Foundation Hall contains remnants from the Original World Trade Center, including the famous 36-foot-highLast Column that became an ad hoc memorial of sorts, with inscriptions and pictures.  When it was finally removed, it was given a hero’s funeral, complete with bag pipes.  “It had become a symbol of strength,” David explained.

Visiting this museum is difficult. There are the shoes that survivors wore and the purses of those who didn’t make it out—even coins Patricia Mary Fagan always had for the less fortunate.  ID cards and pieces of paper that had fluttered down to the pavement including a message scrawled by a man trapped with others:  “84th floor..w. office…twelve people trapped,” the message said.

We hear voice mail messages left by those who were trapped and those calling from doomed planes.  “Jules, listen, I’m on an airplane that has ben hijacked,” is one message left by Brian Sweeney for this wife.

There is one of 24-year-od Welles Crowther’s red bandanas—he was the young man who was a volunteer firefighter and trader who guided survivors to safety and then went back to help others and died.  There are flags and notes that were posted by families looking to see if their loved ones had survived.  The majority had not.

Listening to the voices of the survivors is difficult—one woman recalling stepping over bodies after the planes hit, another recalling, once they got out, “we just stood there crying we couldn’t believe it.”

There are police badges and fire department helmets, patches from those who came and worked on the recovery from around the world.  It is overwhelming and powerful.  There are the timelines of the attacks, photographs and video footage.  And as incredible as it seems now, there is the explanation of how federal agencies were so individualized in those days–with one agency not sharing information with another, with terrorists allowed to get on planes with box cutters and small knives and taking flying lessons in the United States without learning to land a plane.

We hear those terrorists’ conversation in Arabic as they decide to crash the fourth plane—believed to be headed to the US Capitol building—in Pennsylvania when passengers try to storm the cockpit.  It is chilling.

There are mangled bikes that had been parked on a bike rack nearby and a dented tray from the nearby hotel; backpacks and portable radios, brochures for the conferences being held that day—72 staff of Windows on the World had come in early.

Most important, this museum reminds us that each person who died—waiter and financier, secretary and executive, first responder, those starting their careers and those close to retirement—was an individual who was loved and is missed.

“Kids need to know, even if it is hard,” David and Fia agreed.  “If you don’t remembered what happened, these people all died in Vain,” David said, adding: “The story  hasn’t ended… it’s hard to say if it will ever end… look what happened in Paris… it is scary to think about.”

After that intense experience, we took the boys in another direction — to see the comedy of the Blue Man Group at the Astor Place Theater in the East Village. They loved it.