At the Remota — a unique resort in Patagonia 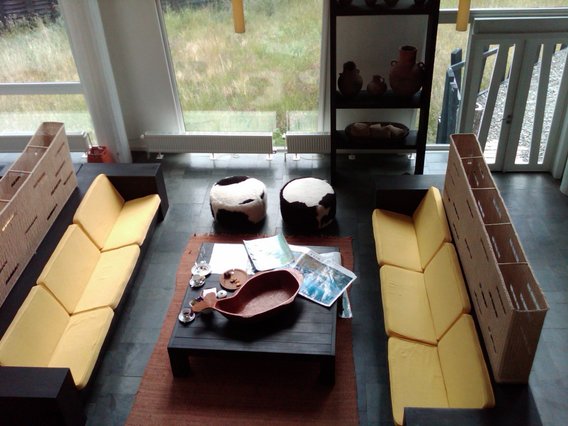 DAY 3 (Dec. 31, 2009):  It’s New Year’s Eve and I’m writing this in perhaps the most unique resort I’ve ever seen—Hotel Remota outside the Patagonian town of Puerto Natales, a small (perhaps 15,000 people) but growing tourist town for those discovering the wonders of this region. (www.remota.cl)

The 72-room resort is situated with giant windows and views of the bay and the glaciers from every turn, soaring ceilings. There’s wifi but no telephones in the rooms, TVs or radios. “The idea is to be one with nature, to see what is going on outside,” explains manager Maria Jose.  “The building comes up from the ground, with grass on the roofs.”

In our room there are high thread count sheets but white washed walls and rough hewn beams from local trees with the bark still on them. Gaucho ponchos hang as wall art. The floors are slate and in the public areas there are huge displays of local art.

But the attraction here is as much outside as in. We’re surrounded by glaciers, mountains, lakes and Patagonia’s famous Parque Nacional Torres del Paine, which many consider the finest national park in South America.

I also feel like we’re at the bottom of the world—almost but not quite. We’re on the Argentinean border just 200 miles or so north of the tip of South America where the Atlantic and Pacific oceans meet. It is windswept and wild and reminds me a little of Alaska, though no lodge there is anything like this one.

Each day we have our choice of excursions-hiking in the national park, horseback riding with gauchos, taking a boat to watch the glaciers calve, mountain biking. And at the end of the day, there’s a Jacuzzi and steam to soothe aching muscles.

Jose says families often come to this resort, as much from Canada, Europe and Brazil as the United States. The place is small enough that kids could be given some freedom to roam inside on their own and guides can tailor activities to interest and stamina.

Today there are 90 guests of whom at least 10 are children as young as four.  I wonder if any will make it to midnight to celebrate the new year.

It certainly is a New Years Eve for the memory books. Since the festivities and dinner don’t start until 9 pm and it is still light at 7, we walk the mile or so into the town of Puerto Natales, the backdrop of snow covered mountains, black swans swimming in the fjord. People are friendly, nodding “hola” as we pass them playing with their kids on the water front playground, out for a run or a stroll. Dogs are everywhere. We have to come back when the shops are open! There are alpaca scarves and hats, carvings, and more.

By the time we get back to Remota, it is time for the festivities to begin. There are pisco sours–the traditional Chilean drink– wine and strawberry juice that my daughter Mel can’t stop drinking. We start out with all varieties of appetizers as we mingle with guests and locals—a rancher from town, a father from Paris here with his daughters and god daughter from Santiago. “It’s been a fantastic vacation,” he tells me, a couple from Washington DC who have been here a week and also  can’t say enough good things about the place. Kids gather around the appetizer buffet scarfing up cheese, fried chicken balls,  empanadas, walnuts, all kinds of dip and crackers—crab, blue cheese, olive  and my favorite, ceviche—three kinds with shrimp, crab and salmon that are prepared with lime juice.

We’re already full by the time we sit down to dinner but that doesn’t stop us from digging in to crab salad, fish, fresh baked bread and then an array of deserts. Soon it is time to don the purple shiny wigs, masks and funny hats. We all toast the New Year with champagne and congratulate ourselves for our health, and for this adventure.