At the Tokyo Fish Market: mixing culture and tradition in unique culinary ways 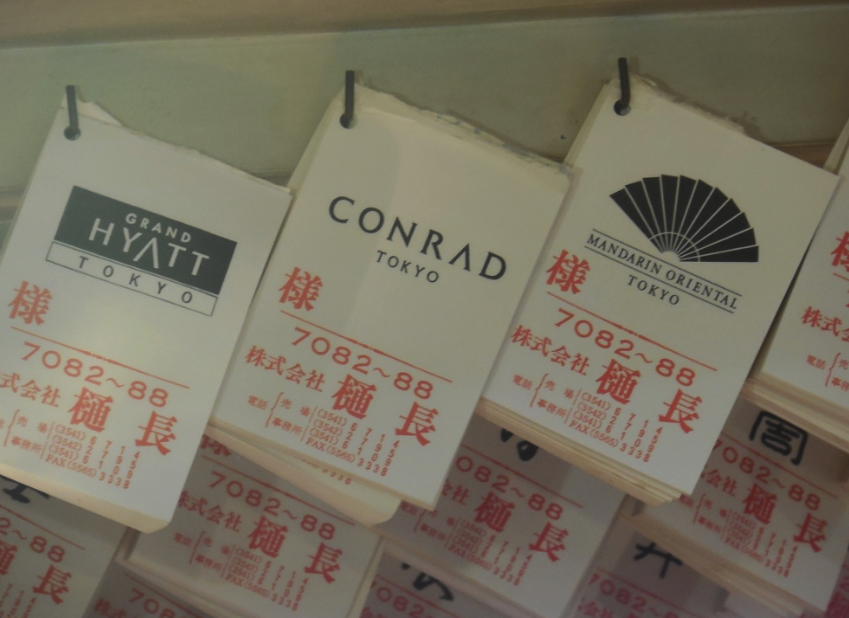 TOKYO (DAY TWO OF TWO) — The men look at the huge slab of fresh tuna as if they are about to perform surgery. And they are.

The three-plus foot knife comes down precisely and in one cut, the tuna is cut.

It is eight in the morning and we are at Tokyo’s famous Tsukiji Fish Market, Japan’ largest. More than 15,000 people work here; international tourists line up in the early hours of the morning for the chance to watch the famous auctions of the fish, including the tuna. Many will go away disappointed. This is the largest wholesale fish market in the world and one of the largest wholesale food markets of any kind. Japanese, explains the Conrad’s Marketing Manager Kanna Iizuka, are somewhat bemused by the fact that this market is such a huge international tourist attraction. “For us, this is a workplace,” she explained.

We’ve walked over from the Conrad with Chef Inaba and have been permitted the rare opportunity to visit some of his suppliers at the “inner market”, the wholesale market where more than 700 licensed wholesale dealers operate in small stalls. The “outer market” that attracts so many tourists is a mix of wholesale and retail shops that sell everything from Japanese knives to tea and tee shirts and many tiny sushi restaurants.

By the end of 2016, the inner market is scheduled to move to Tokyo’s Toyosu district, a little over two miles south of here in advance of the 2020 Olympics. Locals say the new site will be twice as large will be more tourist friendly with tourists able to look down on the huge inner market but of course, some of the charm may be lost. Hiroshi Umezawa, president of Maruken Co, LTD, who has led us through the labyrinth of stalls, says feelings are mixed about the move—the market has been here for more than 50 years. The new site is only about 10 minutes by the train.

Toichiro Iida, the president of Hicho wholesale and retail tuna operation, says he is the eighth generation in this business but doesn’t know if or how the business will continue when Iida, 47, is ready to retire, as his children aren’t interested and the business is getting more difficult.

Tuna, Chef Inaba explains, is the star of Japanese fish, and Iida is among the best in the business. We see small order forms hung all around the cramped stall where the tuna is slated to go in small and larger chunks, carefully wrapped to get all of the air out in a “dry aging” process that enables it to last longer. Earlier, Iida and other dealers, had purchased fish at the famous auction. The tuna—it was over 400 pounds—that they are so carefully cutting—came a few days before from the north of Japan in an ice-filled wooden crate and is slated for restaurants all over Tokyo and in fact, all over Japan.

All around us, we see all varieties of familiar and not so familiar fish—eel and snapper, shrimp and sea urchin, squirming Japanese lobster without claws, oyster and squid, salmon roe that is shaped like the fish, baby cuttlefish and abalone. We don’t see the famous Fugu, that can be poisonous if not prepared properly, and also the seasonal vegetables in the vegetable market including pungent mushrooms.

Chef Inaba, who helped open the Conrad 10 years ago, knows the purveyors he works with well and typically doesn’t come to the market, he tells us—he places his orders by phone, based on what is most fresh. So we are thrilled to have him show us around before his work day starts. Later, he will serve us some of the fish we’ve seen here at Kazahana which boasts three dining areas—Sushi and Teppan counters as well as where we are.

In the evening, the lights of Tokyo and Tokyo Bay beneath us, we are awaiting Chef Inaba’s special dinner which will be served with a sake pairing. He is known for keeping the treasure of Japanese tradition but exploring new ways to present Japanese food. He encourages Westerners—particularly children—to open themselves to try something new but acknowledges it may be difficult for them to accept the style—many courses that are served artfully but may just contain a bite or two. Still, he says, “I’d rather adapt the food to the person so that the experience is enjoyed.”

Just beyond us, adults and kids are enjoying teppan cooked in front of them.

What a beautiful feast we are served — a fish stock followed by a delicious creamy corn tofu. We have an eel sushi, thinking of the eel we saw at the market, that is served with slivers of abalone. We have two bites of sashimi — shrimp and snapper, again thinking of those we had seen that morning. No soy sauce here. That would detract from the chef’s skill. We also learn it is a mark of disrespect not to finish what a sushi chef has served. There is a bite of Japanese Wagu beef served on a grilled onion — as tender as butter — and a sweet fish served over rice. We aren’t stuffed because each course is just a few delectable bites where the emphasis is on the freshness of the ingredients and the beautiful presentation.

Chef Inaba, 47, and the father of two teens, says his dream is to oversee a Japanese restaurant in New York — to bring true Japanese cuisine to more people. I’ll be the first in line.