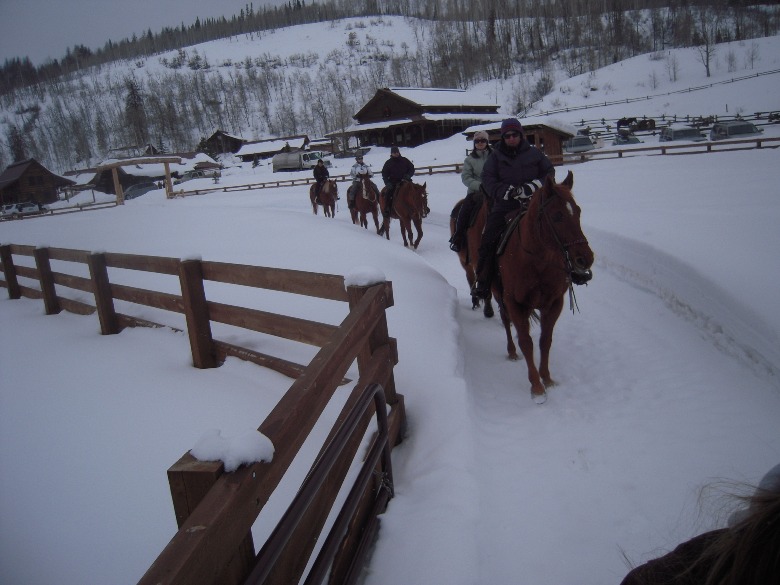 Twenty-five miles isn’t a long distance, but it can sometimes seem like a world away.

At least it can here in tiny Clark, Colorado, at Vista Verde Guest Ranch, outside the famous ski town of Steamboat Springs that has produced more winter Olympians than any other town in North America.

The stars are so bright in the clear night sky we have no trouble seeing the famous Winter Circle, the distinctive star pattern in the southeast skies, consisting of eight stars and rises, visible when the winter solstice arrives in late December. Throughout winter, the circle slowly moves west until it disappears.

The staff has obligingly left us an Evening Sky Map. Earlier, when the sun was going down, we could sit on our cabin porch and watch the horses in the snow-covered meadow. 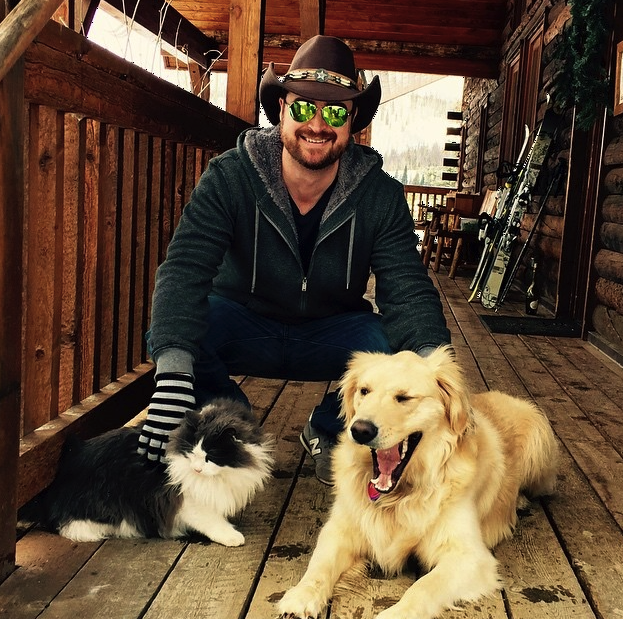 Though close, we couldn’t be farther in spirit from the bustling ski town and crowded slopes. I wondered when I planned this trip if my gang of grown kids, who love nothing more than tearing down those steep slopes, would like a more laid-back holiday — at least for a few days on a week-long winter trip to Colorado.

I needn’t have worried. “Sweet!” is how my 30-something nephew, Chris Yemma, described our ranch stay, acknowledging that when snow conditions are poor, “We could use a change of pace from downhill skiing or snowboarding.” We spent more time together too than we might on the slopes.

Millennials, according to the new research presented at the TMS Family Travel Summit I co-chair, are not only traveling more with their parents (who typically pay the tab), but also crave active and different experiences, including on trips to the snow like this one where they can backcountry ski, snowshoe, horseback ride, fish, snow bike and more, all with knowledgeable guides. Vista Verde is one of seven Colorado ranches open in winter.

“We have the ability to do a wide array of activities and to do so with a guide, who can really teach us,” said Bryan Hancock whose family, including two boys (12 and 10), have come from Atlanta for four winter vacations. His boys, he said, have learned how to build a shelter and make a fire in the snow — not something they’d learn at home or at a big ski resort. 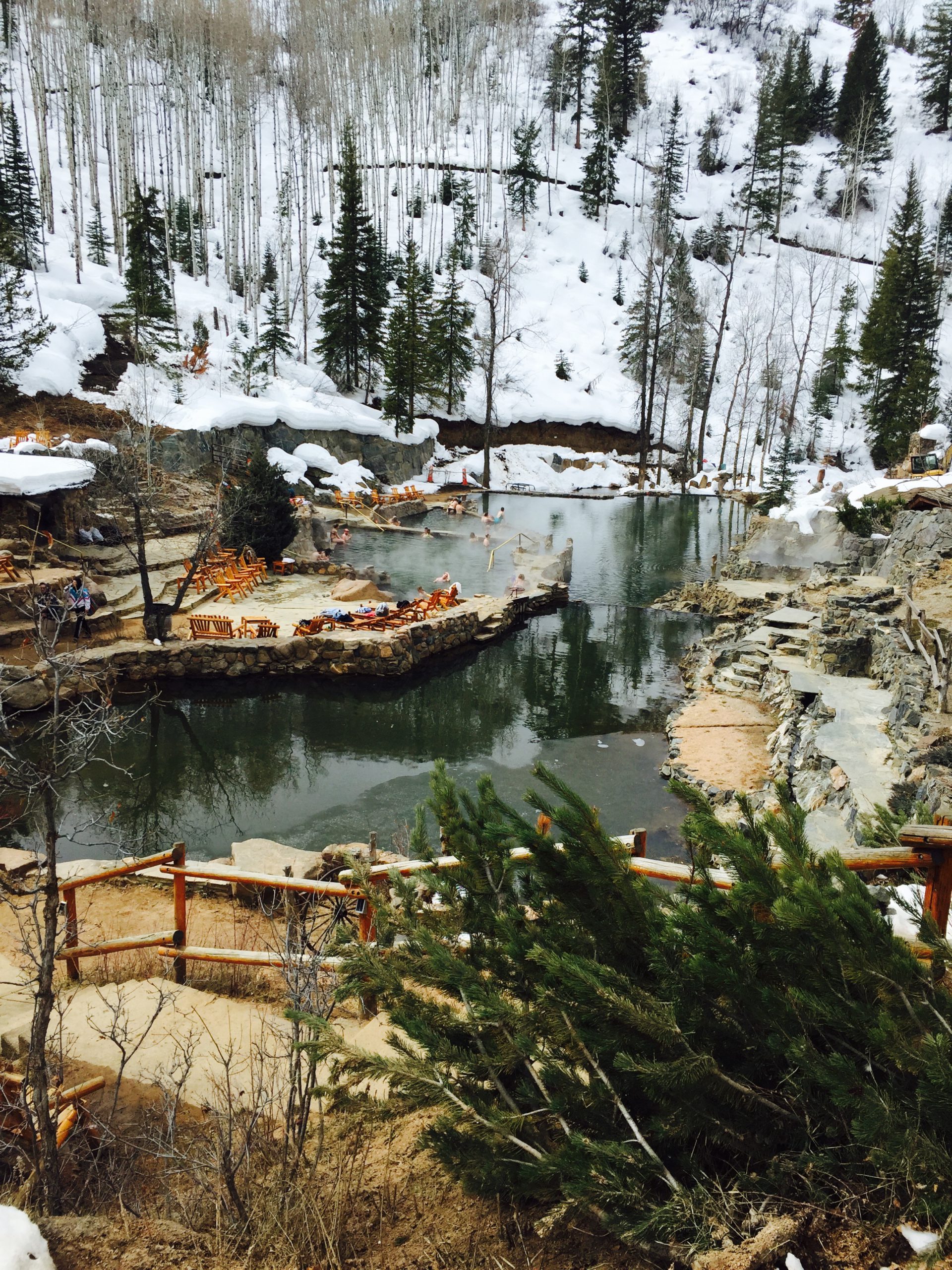 We all went over to Steamboat Resort one day, but even the kids were glad to leave the crowds and tumult to get back to the ranch where we shared 500 acres with fewer than 60 guests, horses, staff and resident dog and cat.

“When families first come, they think the kids will want to go into the downhill mountain every day — and we provide free shuttles — but they just want to play in the snow,” says Steve King, who oversees the winter Nordic program and summer adventure program here. “It seems there is more interest in the natural world and less in the groomed world and they really dig it!”

Dave and Brenda Walters from San Diego have been coming here for six years, since their son Adam was six. “You have a mix of “parents’ activities/kids’ activities” and “family activities” and then a lot of flexibility to do “whatever you want to do,” said Dave, already booked for a trip this winter. “By the end of each day, you head back to your cabin and you want to build a big fire and talk about all the things you experienced.”

Another plus, he said, besides often being the only people they see in the backcountry, “the boys can roam the ranch completely free in a way that they could not elsewhere,” reconnecting each year with longtime staff. “In many ways it feels like a “home away from home.”

I love that unlike our typical trips to ski and snowboard, no one has to worry about planning meals, shopping for groceries, cooking or cleaning up. We just show up for meals — eggs benedict for breakfast, three kinds of chili — veggie, meat or chicken for lunch — pulled pork with ramen and onion broth and noodles for dinner. Of course, there are choices. Did I mention wine, beer and soft drinks are included? No small thing when parents are footing the bill for their over-21 kids. Dude Ranchers Association, n

There are now 22 dude ranches around the country, open in winter, according to Colleen Hodson, executive director of the 100-member national Dude Ranchers Association  noting that repeat business during the holidays seems to be increasing.

Not that these trips come cheap — three nights at Vista Verde start at $1,295 all-inclusive per person, just slightly less for kids. But anyone who has taken a family to a snow resort knows that those trips don’t come cheap either, not with equipment and lift tickets, often more than $100 a day, and kids’ programs that can be over $200 a day with rentals at major resorts, though of course less expensive deals can be found.

In summer, families come to ranches like Vista Verde for a week, but in winter many opt for just three or four nights. There are kids’ activities — snowball fights, fort building, a riding clinic. Several nights a week, younger kids can opt for an early dinner and supervised activity while their parents linger over several courses.

The Wi-Fi is admittedly spotty, but many think that’s a good thing in an age where kids may be as glued to their devices as adults. “Forget the electronics and who cares about TV when you’ve just been square dancing or want to talk about seeing fox tracks or the personality of the horse you’ve been riding,” said Dave Walters.

Says Steve King, “Coming here is about experiencing something new together,” an adventure that changes daily, depending on “where Mother Nature lets us go.”

No one in my family hesitated when I suggested a return trip this season.