Audiences of all ages love the Blue Man Group 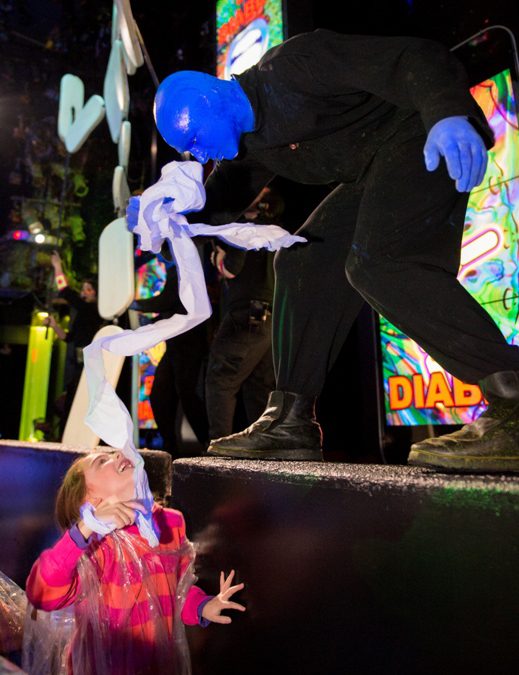 NEW YORK — You’ve got to hand it to these guys.  It’s not easy to make a bunch of blasé teens guffaw, much less the adults and younger kids in the audience.

In fact, The Blue Man Group – yes for those of you who have never seen them preform their entire heads are covered in electric blue — are that rare entertainment who can totally engage an audience no matter what their ages. Maybe it’s the stunts with stuffing Cap’n Crunch cereal in their mouths — 15 pounds of Cap’n Crunch cereal are used per week.  Maybe it’s the marshmallows and Twinkies — 45 marshmallows are used per show; 30 boxes of Twinkie Lights are used every week.

I took a group of boys from that go to our high school under the auspices of A Better Chance  to the New York City show at the Astor Place Theatre (tickets start at $49).  We had based ourselves downtownat the Conrad NY, ideal because of its suites, movie  theater next door and proximity to the 9/11 Memorial Museum which we had visited.

The Blue Man Group was the ideal antidote after such a sobering experience earlier that day.

It all started nearly 25 years ago, when three college-friends — Matt Goldman, Phil Stanton and Chris Wink — developed a bald and blue character they called Blue Man (to evoke the word Human), who delighted audiences at this small theater

In fact, the overwhelming and unexpected success of the Blue Man Group show at the Astor Place Theatre led to numerous productions around the country and the globe — first in multiple US cities followed by international markets  as well as.  They have Grammy-nominated albums, Emmy-nominated TV content, film scores, Children’s Museum exhibits, toys and more.

There’s audience involvement (ready to hang upside down?). Those sitting in the front don plastic ponchos, lest you be hit with paint or gel.  There’s drumming — roughly 40 drum heads used in the show, including both the band loft and stage and some  20 cymbals used with the drum kit.  There are incredible PVC tubed instruments—some 550 feet worth of PVC piping make them work.

Yes, it’s silly and it’s fun.  It’s also considered non-verbal story telling as the Blue Men don’t say anything.  Perhaps that is why the themes and performances have such wide appeal –even to teens.

Finding an affordable hotel room for the family in New York city is not that daunting, especially if you’re traveling during January or February, says the hotel meta-search engine, Trivago.com. According to its regularly updated Trivago Hotel Price Index, these are the cheapest months of the year to visit The Big Apple. They’re projecting that low prices averaging $243/night will prevail till March 2015 and, as we go to press, the search results on their website confirm even lower rates.  Visit before April when sky-high rates prevail until the summer season begins in July.