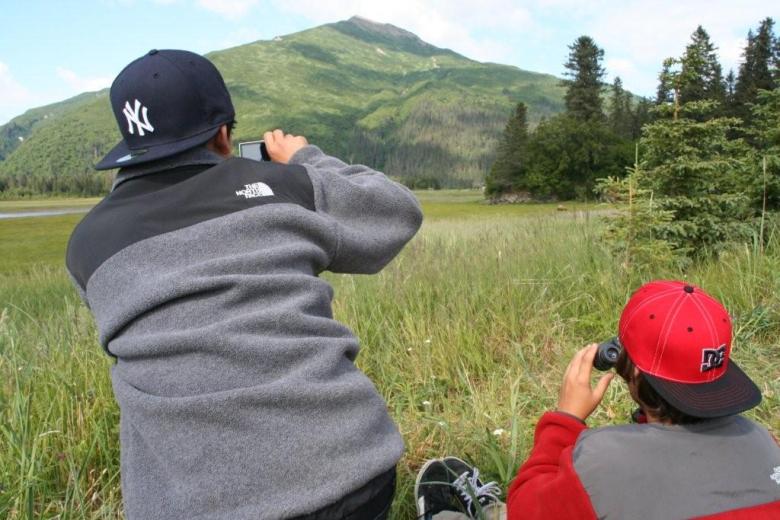 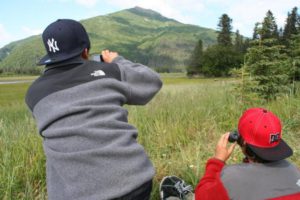 Miles and Max taking photos at the Bear Camp in Alaska

“Routine,” says Gerry Winkler, the pilot of our six-passenger Cessna. Routine, that is, when you are going to land on the beach at an edge of the 4-million acre Lake Clark National Park and Preserve. The area is a unique habitat close to succulent grasses that bears eat, the coast line where the salmon do a major run during the summer, and their winter dens.

PHOTOS Kathy Pederson Haley, the second generation to be involved in running the lodge — her parents first homesteaded this land in 1947 before there were roads, much less electricity — tells me that half the guests here typically are families, many of whom opt to hike, raft, check out the bears as well as fish.

So here we are on a platform 15 feet off the ground at Horn Creek, which feeds into Chitnitna Bay, with snow covered peaks of the Aleutian range across the shimmering water, watching one 3-year-old cub (all 300 pounds of her!) snooze about 50 yards from us while a sow the guides have nicknamed Bossy and her younger cub, Lucky, are grazing. A brown bear so blond they call her Sugar is playing in the meadow. “We had 60 bears last night,” says our 28-year-old guide Matt Vermillion, who gave up real estate and a cubicle in Virginia four years ago to move to Alaska.

He explains there are more bears than there have been in years, including three sets of triplets and three sets of twins all born this spring, some only a little bigger than a Black Lab pup, because of the active Volcano on Mt. Redoubt north of here about 80 miles—and the ash in the surrounding area. We flew over the steaming volcano and the ash on our way here today, in fact — an awesome sight, but nothing like what it was like a few months ago when the steam was going up 30,000 feet, our pilot Gerry Winkler told us.

Alaska truly is a happy place, it seems, because everyone here — from Winkler, who moved her with his wife and two babies nearly three decades ago from Pennsylvania to Caprice Stoner, who manages the bear camp — want to be here.

“Every day is a different show,” says Stoner, a 44-year-old grandmother from Georgia who teaches skiing in the winter. “You never know what you are going to see.”

“I’d trade this over my cubicle any day,” adds Vermillion, gesturing to the bears, the mountains, the glacier-fed water. Did I mention the Bald Eagles, the moose, the fox who also call this bit of paradise home?

Our home for the night is a very comfortable yurt on a platform complete with two cots and comforters, wind up flashlights and very clean portable toilets plastered with Vermillion’s excellent bear photos — even one of them dancing in the creek.

In the dining tent, We’re served gourmet fare — chicken cordon bleu, salad, fresh rolls, potatoes and carrots, even wine courtesy of Dylan Hartford, the 19-year-old wilderness-loving culinary student from Washington state who confesses he “didn’t even know jobs like this existed,” before he got offered this opportunity.

“Should we be afraid of the bears?” my two traveling companies, my 12 year-old cousin Max Weinberg and his buddy Miles Singer ask. The camp is surrounded by an electric fence and the guides have guns. Verm tells us he’s fired his once in just four years. The guides also keep a respectful distance from the bears.

“We have a lot of experience here — eight years between us,” says Stoner. “I know in my heart Verm would protect me and anyone else. “We’ve learned their behavior but with the thought in the back of our mind that they are animals and that anything can happen.” This is the wilderness, after all, not a zoo or theme park.

But there has never been a problem in the 12 years the camp has been there. Moreover, she adds, there has never been an attack recorded on four or more people. The bears probably think we’re a bigger group of animals. “In bear country, bigger is better,” she explains. “When we’re all clustered together, we look like one big bear. They aren’t going to mess with us, usually.” Still, anything could happen. “We are diligent every minute of the day. “We want to have a benign encounter every time. We don’t chase them. We don’t run from them. We don’t cross the creek into their habitat either.”

Just as big a challenge, I think, is keeping the kids amused with no TV, internet, or cell phones. Caprice Stoner, the mother of two who often teaches kids skiing, and has hosted many here (despite the hefty charge that can be upwards of $1000 a night, including the flights), tells me with kids it is all a matter of keeping them engaged. “Bear viewing is a patience game,” she explains. “I try to relate the bears to their lives.”

She talks about the mama bears teaching the young cubs how to fish, how to protect themselves.

“Everything the bears do is a life lesson,” she explains. The cubs wrestling teaches them to protect themselves, they learn not to get into someone else’s space and how siblings must watch out for one another after the mama bear “push them out of the nest,” typically at about age three “They have to rely on one another,” she says.

Max and Miles are alternately fascinated and bored, focusing on my telephoto lens as much as the action in the meadow. “Interesting for about 10 minutes,” Miles says.

But I think for longer than that. I can watch these amazing creatures — some weighing more than 1000 pounds! — for hours as they alternately snooze, graze in the grass, splash in the Horn Creek and tumble and wrestle in the meadow — just like kids would. “A bear nursery,” Stoner declares, looking at the meadow where three sets of sows with twins are playing in the meadow.

Verm tells us that these bears have become accustomed to humans in the vicinity. He points to the three year old snoozing on the sand. “She’s not bothered because she’s used to us being here,” he says.

“They eat grass till they have to take a nap and eat salmon until they are full. Not a bad life!”

It’s such a spectacular place — shimmering water that will be clogged with salmon, majestic snow covered mountain peaks, meadows full of wildflowers (purple irises!) and nutritious salt grass. That’s not to say you want to get too close. “They can get up to 40 mph in three bounds! “and though they look cute and cuddly, you don’t want to mess with them.

Should you encounter a bear, Verm tells us, first you talk to her soothingly. “Keeping calm keeps her calm.”

The next step is to stand up so she can see you are bigger – then, in a more firm tone, say: “Go On Bear!” Louder!

Clap your hands. As a final step, make a lot of noise.

We don’t get that close and hope we won’t — even the three year olds are nearly 300 pounds and stand over six feet tall!

They are consuming 10,000 or more calories a day. “You can see bears literally gain 50 pounds in a half hour,” Verm says, and then they stagger away, their belly jiggling.

But at 50 yards away or less, “she sees us and she can hear us,” he says she’s just not bothered because she’s used to us being here.”

We have this privileged locale because Great Alaska has leased this amazing land from a 71-year-old homesteader named Wayne Byers. It is ringed on three sides by the national park and critical wildlife habitat. Byers lives 500 yards from the eight-yurt camp in a house without electricity or indoor plumbing and so self sufficient he manages all winter on his own when the ice is too thick and the snow too deep for a plane to land. I wish I’d had the chance to meet him but he guards his privacy, we’re told. The kids can’t imagine why anyone would choose to live like this — No Cable! No internet! No hot water!

After dinner, we set out to see the mama bears and her cubs once more at a spot that gives us a terrific vantage point of the meadow — their playground, in effect, that’s about a mile from our camp.

“Until something happens,” replies our guide Verm.