Back to Disney World with the princesses 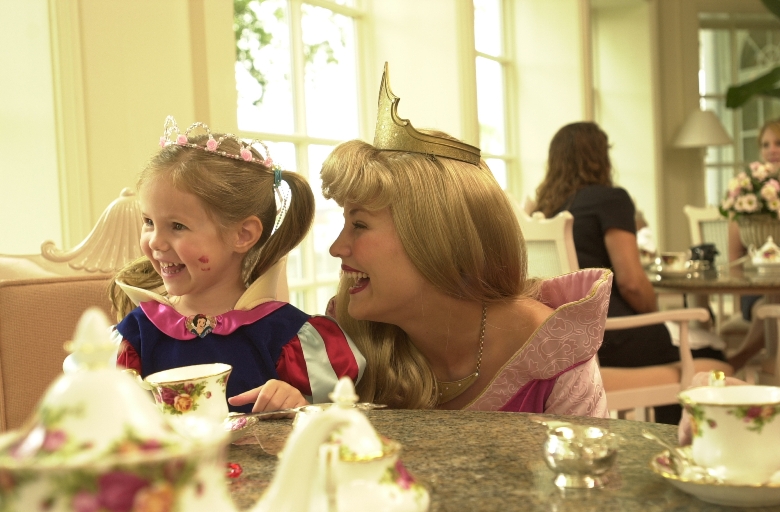 You need to know how to curtsey and wave. You need to be kind to everyone—even annoying younger siblings.  You need to wear fancy dresses and tiaras.

And you might need to navigate a wand in one hand and a cell phone in the other, just like six year old Maggie Davis was doing the other morning in between bites of her breakfast at Cinderella’s Castle with her cousin Ariel Sandoval, and lots of other little princesses in training with their parents.

“It’s every little girl’s dream to dine in the castle dresses as a princess,” smiled  Heather Amezaga, whose seven year old daughter Violet was decked out in full princess regalia, down to the long white gloves and who noted that her family couldn’t afford Disney World (terrific deals right now at www.disneyworld.com and www.visitorlando.com and you can get a good timeshare value from many timeshare sites) when she was growing up. “It’s as much fun for me to watch her as it is for her,” said Amezaga, who is from Ann Arbor, MI.

Some of Disney’s seven princesses make the rounds from table to table, signing an autograph here, posing for a picture there. Brothers look bored; dads and grandpas smiled.  “You don’t have to wait on line. It’s wonderful!” said Chris Perruci, whose daughter Ava is thoroughly entranced. (Perfect Princess Tea Party info )

“You have better manners than my Beast,” Belle tells my breakfast companion.  Dining in Cinderella’s castle, I’m told—is the most popular of Disney’s character meals with families booking months in advance.  Every table is filled and during the course of this morning, more than 500 people will fork over $44.89 a person ($29.95) for the chance to get up close and personal with Belle, Sleeping Beauty, Cinderella, Jasmine and Snow White.

If you haven’t visited Disney World lately with a little girl, be prepared that the experience won’t be about Mickey, Minnie, Goofy or Donald. “It’s all about the princesses,” said Kerrie Herron, whose daughter Rachel, 5, was getting “made over” as a princess by a “fairy godmother in training” at the Bibbidi Bobbidi Boutique located conveniently across the pathway from Cinderella’s castle where princesses and their parents typically book breakfast, lunch or dinner with the princesses months in advance.

Here all 12 chairs were occupied as little princesses—wearing their favorite princess costumes down to the sparkly shoes got their hair done (updo or “extensions with sparkly pixie dust of course, nails painted and make up)—all to the tune of roughly $175. “Worth every penny,” said Wendie Hardnock, from Atlanta, whose daughter Madison was dressed as Jasmine and getting her hair done.  “It will be a memory that will last a long time—for me too.”

FYI: You can get the “Disney Princess Light” experience, as one local mom told me, by heading instead to the barber shop on Main Street in the Magic Kingdom where little girls  can get their pony tails sprinkled with glitter and color gel for  $7.50—not quite the same, of course, as the full scale treatment.

Princesses come in all sizes, of course; one 101 year old woman came for her birthday, as did an entire bridal party.

When my daughters were small, there certainly were princesses but little girls didn’t run around Disney World in full costume, dining with one princess, having tea with another (more about the Princess Tea Party at the Grand Floridian later), posing for pictures.

It was a decided marketing move about 10 years ago, said Disney Executive Dara Trujillo, and the concept has been a decided home run. There are now three Bibbidi Bobbidi Boutiques (including one at Disneyland) and every variety of princess merchandise and experience  from sheets to costumes, wands to plume pens, as well as breakfast lunch and dinner with princesses at different locales—all adding up to a $4 billion industry.

“Princesses are one of our top selling brands,” Trujillo said  (take your pick Aurora’s pink dress; Belle’s yellow one Cinderella’s blue Jasmine’s turquoise pleated pants, Ariel’s wedding dress or the green gown of the newest princess from New Orleans, Tiana. (Incidentally, boys can get made over as a “Cool Dude” or head to the Pirate area where they can become pirates, complete with the pirate oath. “This is a high point for the boys,” said Stacie Currey, whose nine year old twin sons were getting pirate makeovers and whose four year old daughter was scheduled for a session at the Boutique. “This makes the whole experience real for them, said the Maryland mom, adding “I’m exhausted and my feet hurt but you’ve got to keep going.”

At the boutique, moms and grandmas sit patiently as their little princesses are fussed over by a costumed Fairy Godmother in Training. The chairs are turned so the little girls can’t see themselves until they have become princesses –with the help of waving a magic wand and a liberal dose of hairspray and glitter (they can choose to be a “traditional” princess with their hair up in a bun, a tiara on their head, or a “Disney Diva” with faux hair extensions, or a “pop princess” with colored hair attached. By the time they sit down in the chairs, they’re already decked out in their costumes and sparkly shoes and are clutching their wands which parents tell me will get plenty of use when they get home. “They live to dress up,” said Tina Sandoval, who had brought her six year old daughter and her niece to celebrate her daughter’s birthday from Jacksonville, FL.

“Birthdays are only once a year,” she laughs, as she tallies the cost—the costumes, the makeovers, the breakfast.

I meet parents who have never been here before and others who have come many times. I meet grandparents and great grandparents. Despite the economy, they don’t hesitate to splurge–especially for their little princesses.

“This allows my daughter to go from reading the story to being in the story,” said Paul Gennaro, whose daughter Madison is three.

“I live vicariously through her,” jokes Madison’s mom Tabatha, whose email includes the word princess and adds she approves that the princesses teach good manners–and morals about being polite and caring. There’s nothing wrong with wishing for a happy ending either.