Back to the Ice Age on Snowmass Mountain 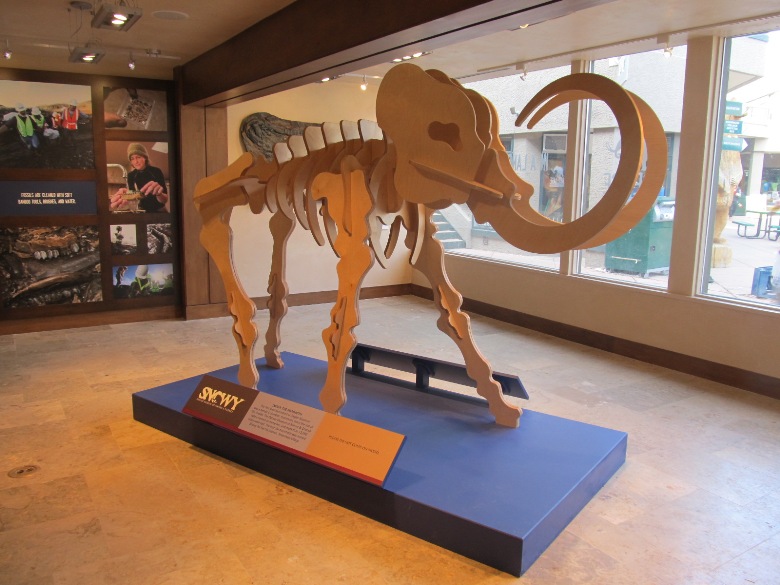 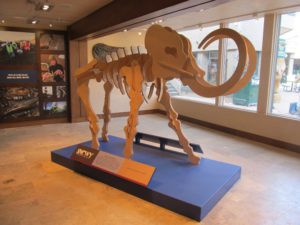 Inside the Ice Age Discovery Center on Snowmass Mountain

In case you are wondering how to tell the huge ancient beasts apart, mammoths are bigger with curved tusks and mastodons have straight tusks. Their teeth are differently shaped.

We’re at the Snowmass Ice Age Discovery Center on the Village Mall where we’ve stopped in as families do all day to touch a mastodon tooth, color a picture, do a puzzle, watch a Nova-National Geographic special and most important, learn all about the fantastic find just a half mile away. The Denver Museum of Nature & Science has now completed its largest-ever fossil excavation—some 5200 fossils—at Ziegler Reservoir near Snowmass Village. The site is a series of Ice Age ecosystems that has so far yielded the largest collection of Mastodon bones from a single site anywhere and incredibly dating back more than 45,000 years. Geologists estimate it could be lot older—the best high elevation Ice Age site anywhere in the world.

How did so many animals get stuck there? There are several theories but scientists believe an ancient earthquake turned the sandy soil to quicksand where the animals came to drink from a lake. They got stuck, starved and died—so sad!

And there they were until an October day in 2010 when a bulldozer driver working on the reservoir expansion discovered a tusk. Work stopped and museum crews arrived and worked as long as they could last fall and seven weeks last summer. Twenty-six different animal groups have been identified including parts of at least 30 American Mastodons, parts of 10 giant bisons (they were 25 percent larger than modern bison…consider that the skull had a horn span of seven feet!), deer, horse, even an ancient camel  as well as otter, muskrat, chipmunk, bat, beaver, frog, fish, birds…

It took a scientific team of 37 experts from around the world to help make the most of the scientific potential of the site. (Scientists now are using the findings to study the Ice Age history of the Rocky Mountains. (Order a new children’s book Snowmastadon! about the find, The Denver Museum’s book on the subject is: Digging Snowmastadon.)

Because the bones were buried in wet silt for tens of thousands of years they are very fragile. Some required a special plaster jacket simply to remove them from the ground and protect them as they were moved to the Denver Museum of Nature & Science, where they are being cleaned and dried. Visit the museum and you can watch fossils from the site being prepared by staff.

Here at the Discovery Center, More than a hundred people a day  stop in  (the center is open 11 am till 6 pm) maybe after a slice of pizza or before buying new goggles or a souvenir sweatshirt says Susan Whittingham, from Snowmass Village Tourism who was answering visitor’s questions the afternoon we visit.

“A lot of people know about the find,” Whittingham said . “The village has taken such great ownership of it!”

Forget a tee shirt. A soft plush mastodon will be this year’s souvenir.