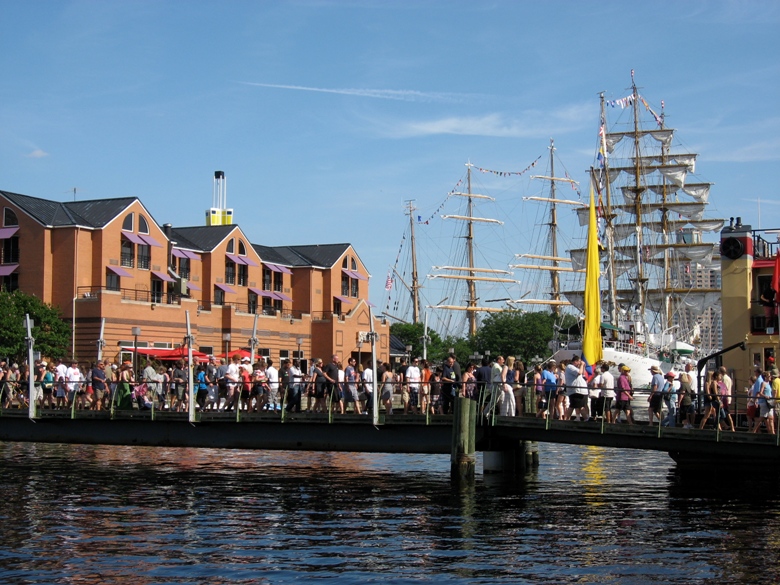 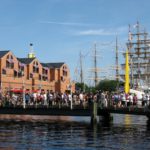 The Star Spangled Sailabration in Baltimore in mid-June

On a hot summer day on the Baltimore harbor it’s hard to forget the water all around you.  Fishing boats, speed boats, paddle boats, tall ships and giant cargo ships all float about on the Chesapeake Bay.

The sweet smell of steamed Maryland crab seeps from red-brick laid store fronts around every corner, and reminders of the great naval battles of the War of 1812 linger not just in history books, but throughout this intensely American city.

Whether for a day or a week, a trip to the Charm City this time of year is a perfect opportunity for the whole family to see the sights, bask in the sun, and revel in the history and tradition of this bay-side town.

We were lured to Baltimore by the Star Spangled Sailabration Event in mid-June and were delighted by the city’s many cultural and culinary offerings. As we approached the Inner Harbor driving into town from I-95 we spotted giant masts of the tall ships that had sailed in from around the world to help Baltimore celebrate the Bicentennial of the War of 1812.

And boy did Baltimore host a patriotic party, in the air and on the sea, from a Blue Angels Air Show to a Festival of Tall Ships.  The massive F18 Super Hornet and Blue Angels were buzzing over the waters off the shore of Fort McHenry as we perused the Family Zone at the Sailabration Festival where we learned to tie a nautical knot and to construct a tiny mouse sized boat.

Since its revitalization Baltimore’s Inner Harbor has stood as a testament to the city’s ability to progress, while never forgetting its roots in the water.  One still gets the sense that Baltimore is a city of industry and labor, grit and resolve.  The city constantly reminds you of where it came from, and the traditions that remain.

This appreciation for the classics holds true with the people’s most prized catch and dish: the crab, now in season and plentiful after a record harvest year.  Step into one of Baltimore’s waterside crab houses, like Bo Brooks on the Canton Waterfront, get a table with a view, and make sure you can wield a mallet: this is a hands-on eating experience.

Don’t worry about asking for the Old Bay seasoning when you’re in Baltimore, it’ll be right there on your table, ready to be liberally sprinkled on each bite.  There are a number of dining options to choose from, but if you’re looking for atmosphere, head to the historic Fell’s Point neighborhood and pop into Kooper’s Tavern or any number of the restaurants along cobblestoned Thames Street on the harbor front.

For those opposed to working too hard for their food (this is vacation after all) order up some authentic crab cakes and taste the Maryland classic that chefs from across the country try and recreate.

If the kids haven’t had their fill of crustaceans after seeing dad hammer open lunch, then take a quick walk on the Inner Harbor waterfront over to the National Aquarium in Baltimore.  One of the treats of Baltimore and regarded as one of the finest aquariums in the country, it is a must while in the Inner Harbor area. While meandering around the boardwalk prepare to be awed by the brand new Ripley’s Believe it or Not! Odditorium, which boasts a Mirror Maze and a Moving Theater.

Join the beloved Mr. Potato Head on his many educational adventures as an astronaut or an underwater explorer during the visiting exhibit at Port Discovery Children’s Museum.  “Don’t try this at home”, parents will be saying after experiencing the wacky science experiments like dropping melons off the roof or watching bubbles erupt into flame at the Maryland Science Center’s Summer of Irresponsible Science.  Baltimore’s fun new museum exhibits will keep kids entertained and learning throughout the summer break.

The tall ships will sail away and the fighter jets will fly back to base after Sailabration is through; but Baltimore, and its array of sights on the sea, will be welcoming families all summer long.