Baltimore is a great place for families to learn history 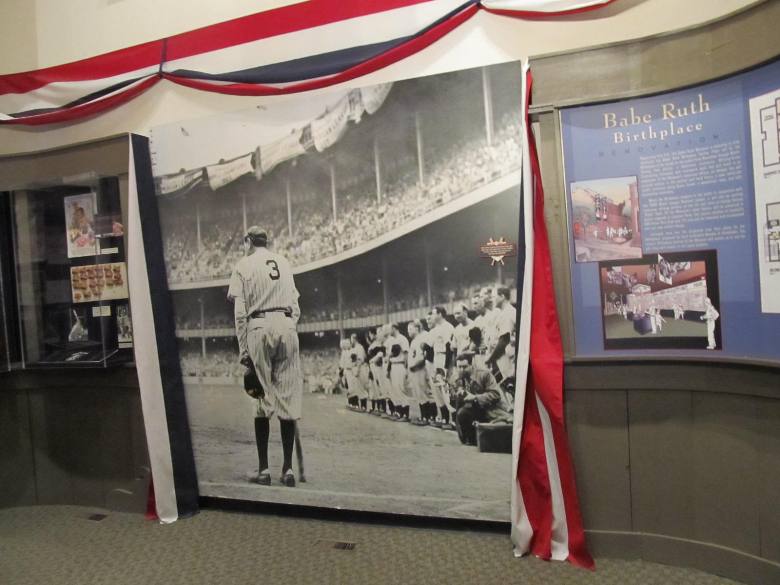 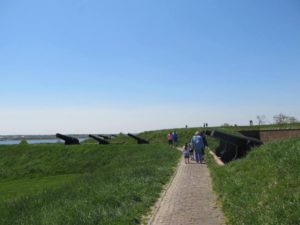 Francis Scott Key, a young Washington lawyer in 1814, was just trying to rescue a friend.

During the War of 1812, Dr. William Beanes had been arrested.  Key was successful in his mission but because he had learned the British planned to attack Baltimore, they were detained for fear they would alert Baltimore’s defenders.

Key, along with his friend watched the overnight bombardment of Fort McHenry that September night 2014 from a U.S. troop ship. The Americans were far outnumbered, but the British ships didn’t want to get too close for fear the American canon balls would land on their wooden boats and burn them; consequently, few of their rockets reached the fort.

Major George Armistead, meanwhile, had commissioned a flag “so large that the British will have no difficulty seeing it from a distance.”

It was 30 x42 feet—about a quarter of the size of a basketball court.  Local flag maker Mary Pickersgill made it along with help of her teenaged daughters and niece.  It was so big she couldn’t lay it out in her house, but at a local brewery.

During the long night of the siege—in the rain—the big flag didn’t fly (a smaller “storm flag” did), as men, women and children watched the bombardment from the city rooftops.  But in the morning, when the British opted to retreat, it was raised at the fort by jubilant soldiers.

Key, spying that flag flying from the ship, was inspired to write what would become The Star Spangled Banner.

That Battle of Baltimore in Sept 1814 was the turning point of the War of 1812, just after the British had burned much of Washington, DC.  The city’s residents joined together to build a mile-long trenches to protect the city from land attack.

Key finished writing his poem on Sept 16, 1814 and gave it to his brother-in-law who in turn gave it to the local newspaper.  People were told to sing   “In Defense of Fort McHenry,” to the melody of “Anacreon  in Heaven,” a British drinking song from the 18th Century.  Within six weeks, it had been published from Georgia to New Hampshire.

In October that year, a song publisher changed the name and published it as “The Star Spangled Banner.”

But it took until the Civil War before the flag became the enduring symbol of the United States and The Star Spangled Banner wasn’t even officially decreed the country’s national anthem until 1931.

Today people consider the War of 1812 “the forgotten war” but visiting the  Fort McHenry National Monument and Historic Shrine is a good place to earn about it.

You can also visit Mary Pickersgill’s house, where on occasion you might meet costumed interpreters from that era and kids can dress up in 1812 clothes and act out their version of the Battle of Baltimore themselves or with puppets.   They can “cook” over the hearth, make their own flag or even write to soldiers serving overseas today.

You can see  Francis Scott Key’s original document at the Maryland Historical Society and of course, you can see the famous flag—the Original Star Spangled Banner—in all its glory and protected under glass at the Smithsonian Museum of American History in nearby Washington. DC

At the fort, local author and illustrator J. Scott Fuqua was signing copies of his children’s book Calvert the Raven in The Battle of Baltimore.  “I want to make history accessible and exciting for kids,” he said, adding that everything in the book—except the talking Raven who allows a boy named Daniel to time travel back to the Battle of 1814—is historically accurate.

At the fort, you can see the canons and canon balls, the quarters where the soldiers lived (the mattresses didn’t look very comfortable!) the prison (later used to hold confederate soldiers during the Civil War and more.  Many people bring their flags to be flown over the birthplace of the Star Spangled Banner.

Army Captain Jeremy Mahoney, just back from serving in Hawaii, had brought his wife and four young kids. “I love history and I want them to know it,” he explained.  And while the kids—the oldest is eight—may not initially be enthusiastic, they are later, when they learn about the subject in school.

This summer there is a lot of history to be learned in and around Baltimore as the city commemorates the Bicententennial of the War of 1812, a tribute to Harriet Tubman and the Underground Railroad and the continuing 150th anniversary of the Civil War.  Use a Star-Spangled Banner Pass to explore key sights of the War of 1812 with discounted admission.   Other passes offer discounts to significant historic museums and sites.  www.baltimore.org/commemorations.

As I write this, I’m looking out at Baltimore Harbor from my room at the Four Seasons, known for welcoming children. The concierges here offer an entire list of activities to keep teens and younger siblings happy and engaged from a cruise on the pirate ship “Fearless,” complete with “tattoos and face painting, to the National Aquarium and Maryland Science Center to one of my favorite museums, the American Visionary Art Museum where all of the work has been done by untrained self-taught artists.  It is so much fun!

Historic Ships in Baltimore is home port to the USS Constellation, the last all-sail warship built by the U.S. Navy and the WW2 Submarine USS Torsk. 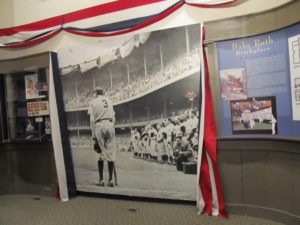 Inside the Babe Ruth Museum in Baltimore

Let’s not forget the Babe Ruth Birthplace and Sports Legend Museum, near Orioles Park at Camden Yards.  In the house where the Babe was born, there is a great new exhibit on the origins of the use of the Star Spangled Banner at sporting events.  It all started at the 1918 World Series, the Babe’s last games with the Boston Red Sox.

Teens might prefer a ghost walk or Segway tour.

There’s plenty for parents too.  I enjoyed a facial at the spa here at the hotel—surprisingly large for a city hotel.

Then we had a Japanese tasting dinner at PABU that is a collaboration of chefs Michael Mina and Ken Tominaga, chef owner of Hana Japanese Restaurant in Northern Ca.  There are over 100 sakes and a sake sommelier who paired the sakes to our courses—that started with one of our favorites “Happy Spoon” which was an oyster served on a small spoon with ikura, crème fraiche, lotus root, seaweed salad—all in one delectable bite.

There were the best chicken wings I’ve ever tasted, varieties of skewers (the Japanese meatballs were especially yummy), Michael’s ramen noodle soup, sushi and desert that included rose mochi ice cream.  The price seemed a bargain –$44.88 per person, plus another $25 for the tasting that typically includes wine and beer as well as sake.

And while  Pabu clearly was attracting an adult Saturday night crowd, there were some families as well with kids happily welcomed, complete with special no-spill drink cups.

Wherever you go in Baltimore, the kids are bound to learn something—maybe without even realizing they’re getting a history lessons.  “If you don’t know history,” said Captain Mahoney, “You’ll make the same mistakes again.”