Behind the scenes on the Norwegian Gem 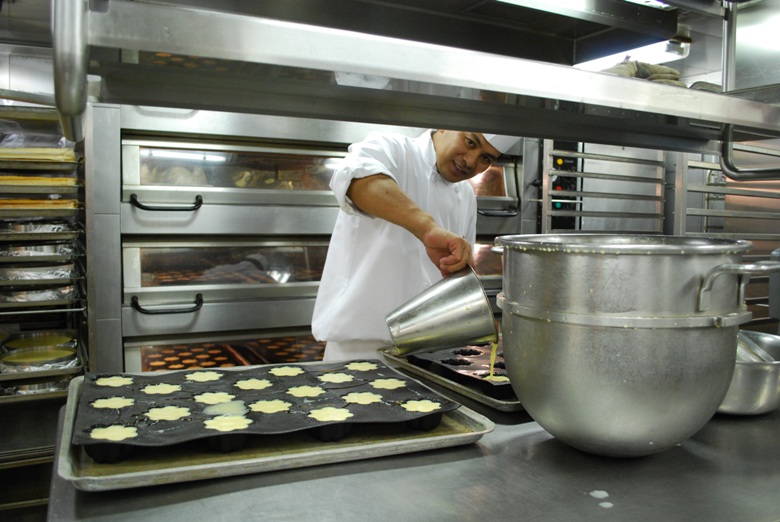 What a shopping list! That’s just part of what the roughly 4,000 passengers and crew consume every week aboard the Norwegian Gem. This is “freestyle cruising,” after all, which means there is food available somewhere 24/ 7 — great when you have kids who aren’t hungry when breakfast is being served but starving-can’t-wait-another-second-for-lunch an hour later. And no matter where the ship is, the food comes from the USA — no running out for a carton of eggs. The Fridges are huge! So are the vats of soup. We see it all on a back-of the-ship tour that sells out on every cruise, I’m told, even though it costs $55. We get to see everything from the garbage facility — it’s cool to see the cans after they’ve been compacted — to backstage in the theater, to the bridge, where we watch two officers driving the massive ship (it’s 965 feet long! Did you know it took 825 MILES of electric cable to build her? 65 MILES of Pipe?)

But I’m more amazed at the galleys and the shopping lists. And I thought it was rough when I had to cook for the kids’ high school track teams! The quantities are enormous — over 350 pounds of dark chocolate and 150 pounds of white chocolate just for the Chocoholic Buffet! And, I’m told by veterans, all the goodies are gone in a flash. We watch some of the staff preparing gargantuan trays of cakes. No sampling allowed! In another kitchen, they’re slicing carrots and zucchinis. There are separate prep rooms for vegetables, for meat, for poultry for fish. The kids think the fish fridge smells “yucky” but there are the lobster tails just waiting for tonight’s special dinner — 600 pounds of lobster will be eaten says executive chef Mohamad Hasom. There are 11 different cooking galleys for the different restaurants too. The crew, of course, has their own mess, and because they are from more than 60 countries, Hasom explains, it’s an international buffet with dishes from around the world. The ship really is a town unto itself, albeit one with residents with different customs cultures, languages and of course tastes in food from around the globe.

Equally impressive on this tour is the focus on cleanliness. Anyone who has been on a cruise ship recently knows that there are hand sanitizers everywhere — and staff waiting to spray your hands when you get on the ship, when you enter a dining room. What passengers don’t realize is that the behind-the-scenes cooking and prep areas are “as clean as a U.S. operating room,” says the Hotel Director Prem Kainikkara, who is responsible for 1,000 of the crew.

There is a separate elevator just for garbage! There is an elaborate recycling system. Crew must wash their hands for at least 30 seconds! The ship is inspected by U.S. officials twice a year and proudly, Kainikkara says, NCL has always passed with flying colors.

The tour is a little long for kids but the four along with us perk up when they get to go back stage in the theater and try on a few costume pieces. The backstage area is a lot more cramped than you’d think, though it stretches upwards or more than three deck.

Reuben Delgado, the production director for the three on-board shows tells us his crew of 15 performers sign on for 7 month stints and don’t really get a full day off that entire time, though they may only work a couple of hours in the morning and again in the evening.

Still, it can’t be easy living and working with the same group, day after day, week after week. “It’s not like you can go home and get away from someone you are having a problem with,” he says.

Of course DelGado, a veteran of six years of ship board entertaining isn’t having any issues this cruise. His fiancé is one of the dancers on board.

The shows, in case you are wondering, typically last five years. (The kids in our group loved the magic show so much they want to see tomorrow’s show twice!)

I think they’ll have a better understanding of how much work it takes to make that show happen.

I certainly have a new appreciation for what it takes to make this ship run (and I don’t mean the 52,840 gallons of fuel consumed each day.)