Being a Princess for a Day at Disney World 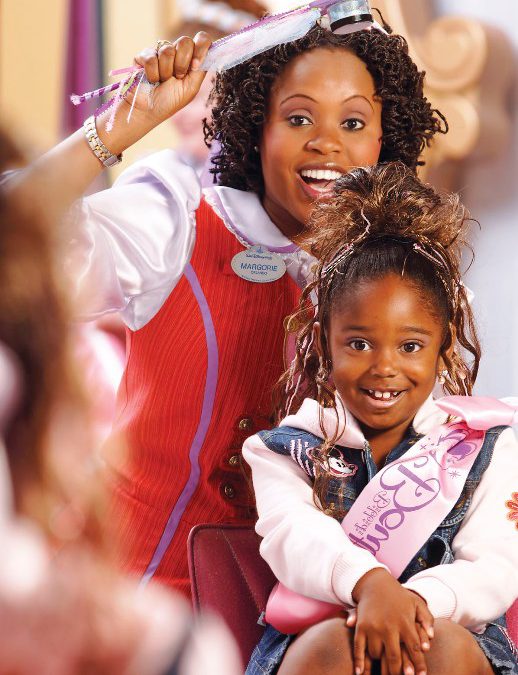 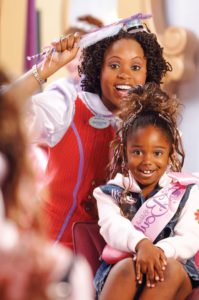 Makeover time at the Bibbidi Bobbidi Boutique at Disney World

I forgot my tiara and kept misplacing my wand.

After all, it’s not easy being a modern-day Disney princess. You need to keep that tiara firmly on your head; you need to be kind to everyone — even annoying younger siblings. Those long princess dresses and sparkly shoes, though the ultimate in princess fashion, aren’t made for running or jumping around theme parks. And then there’s the curtsying and the waving and even the proper way to ask for a piece of cake, which a group of young princesses-in-training — their tiaras perfectly in place — quickly found out during princess lessons at the Perfectly Princess Tea at Disney World’s Grand Floridian Resort.

Let’s not forget the challenges of modern technology. Maggie Davis, 6, had a difficult time getting the hang of things, juggling her wand in one hand, her cell phone in the other, while eating her breakfast at Cinderella’s castle at the Magic Kingdom where she and her cousin, Ariel Sandoval, hobnobbed with Snow White, Sleeping Beauty and others.

“It’s pretty pricey and we didn’t even eat very much,” laughed Ariel’s mom Tina Sandoval, who brought the girls from Jacksonville to celebrate Ariel’s birthday. Still, she said, the uneaten $100-plus breakfast, which included souvenir photos with Cinderella and plenty of princess autographs, was “worth every penny,” because her two little princesses were having so much fun — as was she. “It’s fun just to watch them,” Sandoval said. “They live to dress up.”

If you haven’t visited Disney World lately with a little girl (look for good deals, including for the military, right now and through the summer at www.disneyworld.com  and www.visitorlando.com ), the experience likely won’t be about Mickey, Minnie, Goofy or Donald Duck, as when my girls were that little. These days, “It’s all about the princesses,” said Kerrie Herron, whose daughter Rachel, 5, was getting “made over” as a princess by a “fairy godmother in training” at the Bibbidi Bobbidi Boutique located conveniently across the pathway from Cinderella’s castle. (You’ll find another at Downtown Disney and a third equally popular in California at Disneyland, www.disneyland.com .) “It’s a dream come true for her,” said Herron.

St. Louis grandmother Kaye Ivnick had forked over roughly $250 for the Perfectly Princess Tea that comes with a Princess Aurora (aka Sleeping Beauty) doll, tea served in tiny pots, heart-shaped peanut butter sandwiches, pink-frosted cake, songs sung by a princess and those ubiquitous princess lessons — all for her granddaughter Alexa’s third birthday, the fourth granddaughter she has treated to “the whole princess thing,” she said. “I wouldn’t miss it for the world.”

“This allows my daughter to go from reading the story to being in the story,” said Paul Gennaro, who is from New Jersey and treated his 5-year-old daughter Madison to both the makeover and the tea with her mom.

Devotion to the seven Disney princesses (from the first, Snow White in 1937 to 2010’s Tiana from “The Princess and the Frog” set in New Orleans.) is no accident, of course, but the result of a hugely successful marketing campaign over the past decade. Disney officials say this has now morphed into a $4 billion dollar industry that draws girls of prime princess age, three to eight years, and their families to the Disney parks and has helped propel a new Fantasyland renovation in the Magic Kingdom that will ultimately include more princess experiences. “Princesses are one of our top-selling brands,” says Dara Trujillo, manager of Disney Theme Park Merchandise. Trujillo oversees the princess initiatives here, noting the line of little girls waiting at the boutique in Aurora’s pink dress; Belle’s yellow one, Cinderella’s blue, Jasmine’s turquoise pleated pants and Tiana’s mint green tulle; she’s the newest princess from New Orleans.

In the boutique, all 12 chairs were occupied, as the little girls got their hair and makeup done. With the help of waving a magic wand and a liberal dose of hairspray and glitter they can choose to be a “traditional” princess with their tiara anchored to a ballerina-like bun, a “Disney Diva” with faux hair extensions or a “pop princess” with colored “hair” attached. The makeovers — with costumes, makeup and tiaras — cost roughly $175, though less expensive options are also available. “It will be a memory that will last a long time — for me too,” said Wendie Hardnock, from Atlanta. Her daughter was dressed as Jasmine and was being twirled around to see her princess persona in the mirror.

Some parents told me they’d visited the boutique more than once. One 101-year-old woman came for her birthday, as did an entire bridal party. FYI: You can get the “Disney Princess Lite” experience, as one local mom told me, by heading instead to the barbershop on Main Street in the Magic Kingdom where little girls can get their ponytails sprinkled with glitter and color gel for $7.50. (Boys can get haircuts at the barbershop or be made over as a “Cool Dude” at the boutique. More popular is the chance to become pirates in Adventureland, complete with face paint and a pirate oath.)

“This is a high point for the boys,” said Stacie Currey, visiting from Maryland, as her 9-year-old twin sons became mustachioed pirates. She’d already scheduled her 4-year-old daughter for a princess makeover. “We splurged on this and it makes the whole experience real for them, she said. “I’m exhausted and my feet hurt but you’ve got to keep going.”

That may be why parents were so happy to pay for the privilege of the princesses coming to them at Cinderella’s castle rather than waiting on line for autographs, though a reservation is required months in advance. “It’s every little girl’s dream to dine in the castle dressed as a princess,” said Michigan resident Heather Amezaga. Her 7-year-old daughter Violet was decked out in full princess regalia, down to the long white gloves. Amezaga noted that her family couldn’t afford Disney World when she was growing up.

Brothers look bored at the Princess Breakfast, while dads and grandpas keep cameras at the ready as Belle, Sleeping Beauty and their sister princesses make the rounds from table to table. “You have better table manners than my Beast,” Belle tells my breakfast companion.

(For dining reservations call 407-WDW-DINE up to 180 days before check-in. An easier reservation is at Epcot’s castle-like Akershus Royal Banquet Hall where the princesses also mix and mingle. For more tips from parents who have visited The Mouse so often that they have been chosen to be part of Disney World’s official Moms Panel, visit www.disneyworldmoms.com .) (And check out “Birnbaum’s Walt Disney World” which offers lots of fun facts.)

At the Perfectly Princess Tea, meanwhile, the girls are too intent on practicing their curtseys to even notice a bride in the hotel’s grand Victorian lobby — so fitting for their princess promenade after the tea is over. “I live vicariously through her,” jokes Madison Gennaro’s mom Tabatha. “Besides,” she adds as she pours her daughter more tea from the tiny white pot, “It’s good to start off believing that everything will be happily ever after.”

For more on Eileen’s visit to Disney World, read her Travel Diaries here