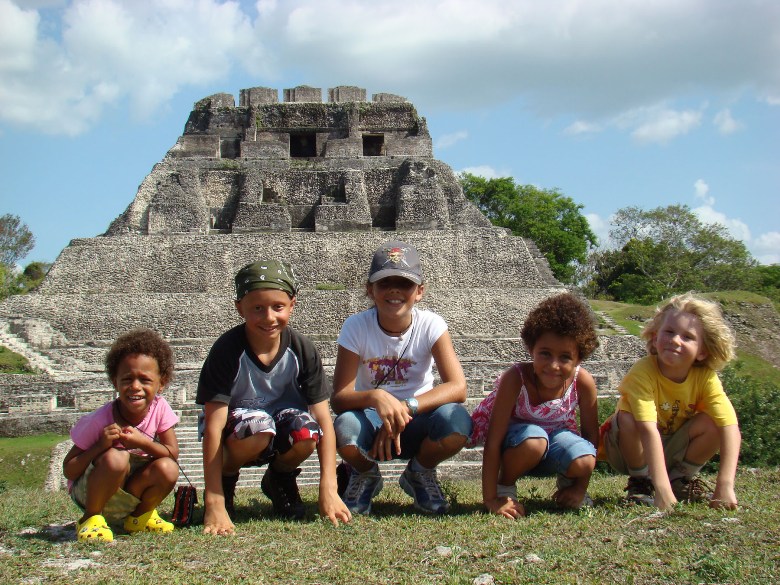 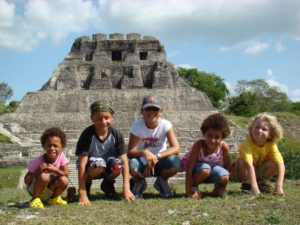 Kids having fun exploring the ruins of Xunantunich in Belize

The big green moray eel stares at me, coming out of his hideaway in the reef, as if to say, “Go away! I don’t want to play!”

But I’m content to just watch him, his buddies and all of the other creatures that call this Barrier Reef, which runs nearly the length of Belize, home. On our first morning, we’re scuba diving off of Queen Cay, an hour’s boat ride from The Inn at Robert’s Grove, a gem of a resort. It’s located in the sleepy town of Placencia, south of Belize’s largest island, Ambergris Caye. The Inn at Robert’s Grove (www.robertsgrove.com) has just 52 rooms and we feel as if we’ve been invited to someone’s very spacious Caribbean villa — albeit one that stretches over 22 acres and offers three pools, a spa and array of water toys. Our room is really a two-room suite with a little kitchen, a porch looking over the ocean, and a hammock designed for naps. The owners — former New Yorkers Risa and Robert Frackman — opened the resort 10 years ago, after falling in love with the area. Back then Robert’s Grove only had three rooms. This year, the resort won the Belize Tourist Board’s Hotel of the Year Award. (Rates start at $240 a night. Check the family packages.)

The families we meet are after the same thing we are — some R&R with a little history (plenty of Mayan ruins) and adventure (caving anybody?) thrown in; a place that’s peaceful, English speaking and accepting of the U.S. dollar. Even better, Belize (www.travelbelize.org), which borders Guatemala and Mexico, is an easy three-hour flight from U.S. gateway cities.

“Belize has the perfect combination of beach and culture,” said Katrina Pratt, a Californian, vacationing with her husband, daughter Maddie, 10, and son Ian, 8.

“It’s nice that we can go somewhere where I can go off and fish and they can have fun hanging on the beach,” her husband Drew added. Meanwhile, Maddie and Ian were having a blast on the tiny cay, burying themselves in the sand and snorkeling from the beach. A few of us in the group went out to dive with Dive Master Francisco Linarez, who pointed out parrot fish, grouper, Southern stingray and tiny purple fish swimming in schools. The reef teemed with brain coral, tube coral, and delicate fan coral that swayed in the tide. As the crew laid out a first-rate picnic lunch for us on the tiny island, I wondered why anyone would want to be at a crowded resort where they have to stake out beach chairs at 7 a.m. when they could have this slice of paradise?

When we got back to the resort, kids were jumping into the pool, swinging in hammocks on the beach, and tossing a baseball at the water’s edge as their parents relaxed. This is the kind of place where you can feel comfortable letting even 10-year-olds roam around and do as much, or as little, as they like. The Inn even has its own dive operation — you and your older kids can get certified here. Or you can play tennis and sail or explore a jaguar preserve.

Amy White, traveling with her daughter, Kaitlyn Harezlak, a new college graduate, combined their time here on the beach with a stay at the oh-so-fun jungle resort Chaa Creek (www.chaacreek.com. The two resorts, Robert’s Grove and Chaa Creek, offer a combination package, while Ka’ana (www.kaanabelize.com), another small, upscale resort in that same area offers $300 air credits.

Looking for a smaller dose of adventure? The kids on our Jungle Cruise up the Monkey River, a 45-minute boat ride from the resort, got to taste termites (minty, they reported). By 9 a.m. we’d seen monkeys high in the trees and heard them screech and spied turkey vultures, yellowtail orioles, egrets, bats, blue herons and baby crocs. Surprisingly, a mother dolphin and her calf appeared, jumping and playing, seemingly just for us.

After just a day or so, kids — and parents — begin to make friends. It’s easy at a small place like this. Pamela Auerbach, a single mom from Bethesda, Md., said that this helps make her more comfortable when traveling solo with her two boys Jonah, 9, and Cole, 11. “It’s not too crowded,” Cole added, as he and his buddies raced off to gather coconuts, which the staff obligingly cracked open with machetes.

Those with younger children seemed equally pleased. While there is no organized kids’ program, Jennie Vogel raved about the baby-sitter who watched her preschooler and six month old.

But even in paradise, everyone wasn’t happy. One teen was so disappointed by the overcast weather — and the lack of other teens — that her mom decided to decamp for more sunshine and more action at another resort further north along the coast. I sympathized.

The next day, as my husband headed off to fish, I watched the pelicans from my chair on Robert’s Cay — less than an acre around — about an hour’s boat ride from the resort. There are just four cabins overlooking the sea on the island with the requisite hammock on the porches. Augustus Benjamin and his wife, Romelia Pineda, take care of the island and the Robert’s Grove guests. This is a great spot for a family reunion.

Another day, we joined some newfound friends and headed into Placencia (population 1,200). This isn’t a manicured resort town. We chowed down on shrimp curry at De Tatch, a thatched-roof, open-air restaurant down a narrow, meandering street, past one-room houses on stilts. Our tab, including a couple of drinks, was less than $25USD.

Amazingly, we found Tuttifrutti, a genuine gelateria, nearby. Lorenzo Testa, who moved here from Rome, owns it. I had to have seconds; it was so good.

Some vacation days just can’t get any better.