Belly dancers and couscous — a day in Tunisia 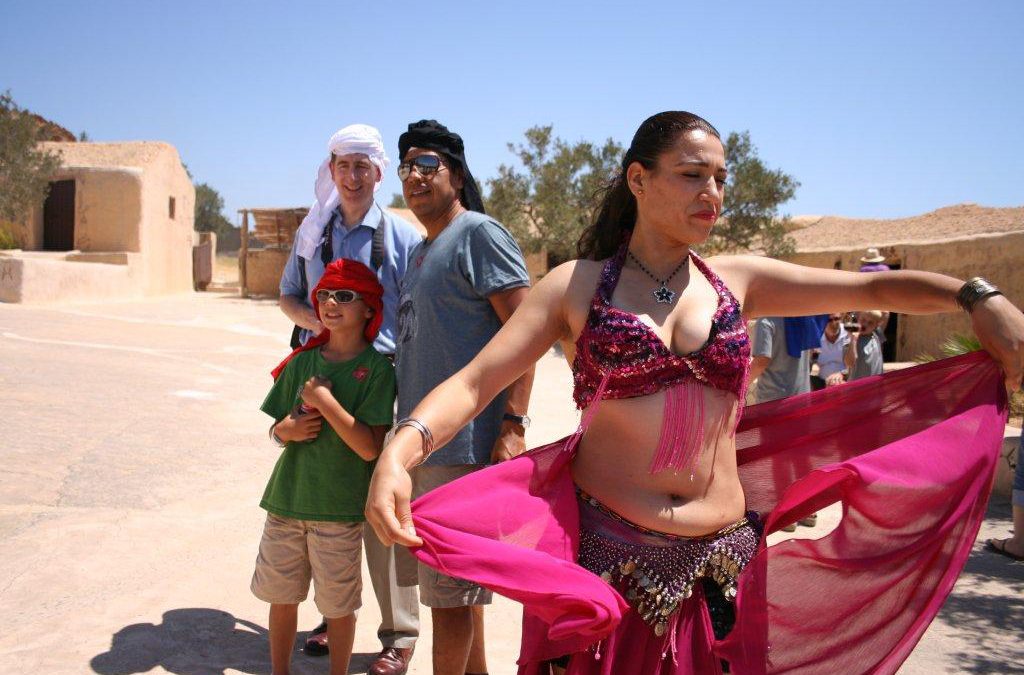 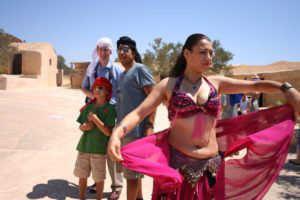 DAY SIX — It’s all about the swish of your hips.  We’re at Douar Laroussi about an hour from where the Disney Magic (www.disneycruise.com)is anchored this morning in Tunis, Tunisia in North Africa.

It’s the Tunisian version of a hands-on outdoor museum like Sturbridge Village, though far smaller. This is a Berber Village where three generations ago, families lived in the small stone buildings that now house the place we have lunch (couscous, of course). Gharbi Mtir, who oversees the place—open only to small groups of tourists–says the restoration started some 30 years ago.

We’re with the Adventures by Disney (www.adventuresbydisney.com) group that until now has only offered land tours for families. This season, they’ve begun also to offer the  program aboard the Magic in the Med, which means my family and the 13 families—including three couples without children (yes, Disney has lots of adult fans) and three grandparents are treated to excursions like this one, daily gifts (belly dancer skirts for the girls and Arab head coverings for the boys), and a lot of hand holding from our two veteran guides,  28-year-old Courtney Robicheaux and 34 year-old Jennae Campeau who between them  have more than 20 years of Disney experience.  Jennae guided on the first Adventures by Disney trip five years ago.

We have kids as young as four and as old as 18, celebrating a high school graduation with her aunt –21 kids in all.  We’re also celebrating Gerald Berger’s 80th birthday.  “We did this trip instead of a big party,” explains his daughter Shelley Morley, who was attracted to the ABD option because we would be able to bypass lines at popular tourist attractions.

I like that we’re with the same group every day–we can sit with some at dinner and Jennae and Courtney sweat the details large and small.  So today we are alternately learning to belly dance, write our names in Arabic, sample Berber bread that we’ve seen baked in an outdoor oven and have orange water sprinkled over our heads (very refreshing in the 90 degree heat!

The kids aren’t the only ones enjoying the belly dancing.  Turbaned dads are getting into it as much as moms with the brightly colored-purple and orange and red filmy skirts festooned with jangly coins—tied around their waists and heads. Sure it’s touristy and maybe a little cheesy. But it is really fun and that’s what foreign vacations are supposed to be about. The kids will probably be talking for years about the day mom “belly danced” and they’ll have the pictures to prove it.

“I really liked the dancing said seven year old Amber Ayyad. “The food was the best part,” declared her older brother Hunter. The kids seemed to thoroughly enjoy lunch served under a type of thatched roof on long wooden tables with colorful tapestries o the wall. The tomato soup, they declared, was just like Spaghettios and then there was couscous with chicken and vegetables  (hot or “baby” sauce served on the side), sweet peppermint tea and date cakes for desert along with prickly pear cactus fruit—sweet but hard to chew the seeds!

While we eat, we’re serenaded by locals in traditional colorful  Berber dress playing a drum and flute that they tell me is called a Sokra.  One woman dances around the room with a stone jug on her head.  Kids clap. The parents snap photos. Several of the moms volunteer to get dressed up in traditional costumes—lengths of cloth tied at their shoulders with a rope belt with the coin-festooned scarves covering their heads. They danced in the middle of the room as the musicians played.

Before lunch, we stopped at a fortress in Hammamet that dates from the 15th century. The kids liked climbing to the top and peeping through the “windows” cut in the stone, but the most fun of course was shopping in the market just outside—some 300 stalls selling everything from camel fridge magnets (cheese magnets are my weakness on trips) sunglasses, leather, pottery—nothing amazing but fun for the kids to bargain for their souvenirs.

“It is really exciting for them to just set foot in Africa,” said Steve Carpenter, an American executive currently living in China with his wife and three kids. Phoebe Carpenter, 12, scarfed-up the hot Harissa sauce on her bread liked the sweet smelling orange water they sprinkled over our heads.

“I’m happy to see all of you here,” says Gharbi Mtir and I think he means it–besides the dollars we bring to his business. “We want to show you our culture.”

I’m not sure exactly what we would have done elsewhere in Tunisia but each excursion is designed, Janae Champeau says, to offer a small slice of life families might not see. For example, while crowds are going to Pompeii when we dock in Naples, the Adventures by Disney group will head to a local farm.

Some of the moms in the group are disappointed that they are missing Pompeii, they said. “I could use a little more history on the itinerary,” said Shelley Morley. And that is the rub. The upside is you don’t have to worry about where you are going or what you are doing, choosing expensive excursions and then being “stuck” in a big crowd if the kids are bored or unhappy. The downside is you don’t get to choose what you do (you could always pay double, of course and book something else) and go with what the itinerary offers.

Maybe you’ll miss a few “big” sites. But it will be a lot less stressful.