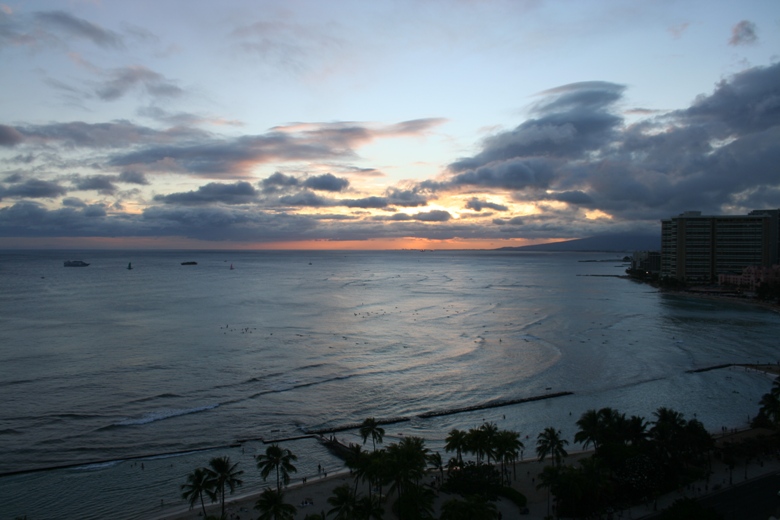 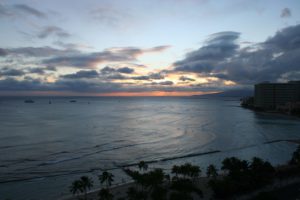 No, not a spa named after turtles—a spa FOR sea turtles.  We are just off the leeward coast of Oahu, near the Ko’Olina Resort where we are staying at the JW Marriott Ihilani Resort and Spa (www.ihalani.com) snorkeling with marine biologist, Tori Cullins, and her crew.  She and her husband Armin offer smaller trips than other outfitters—just 14 aboard this morning– at Wild Side Specialty Tours from Wai’anae, another world from Waikiki, so visitors can really appreciate the amazing sea life here—like the turtle spa (www.sailhawaii.com)

Really, she explains, this is a “turtle cleaning station” where turtles return again and again in about 20 feet of water for fish to come and “clean” them, getting off sand, dead skin, algae.  We see three of them getting their “treatments.”  One snorkels with us in the water.  Amazing!  Amazing that these creatures only start to give birth when they are 50 or so and may live to be 100.

That isn’t even the piece de resistance of this early morning trip.  We swam with wild spinner dolphins—two pods, maybe 30 of them racing around our boat; there are very few places in the world to do that, I learn.  The Hawaiian spinner dolphins feed at night, we learn, and return to this area close to Hawaii’s western coast to play and rest.  They are not that big–only five to seven feet long.  One in the group sees a mom nursing a pup.

“Nobody comes to the west side of Hawaii but it is the best place for experiencing the ocean,” says Mullin.

As long ago as 800 years ago, it’s been documented, Hawaiians were greeted by spinner dolphins here when they came, so the dolphins have learned to be accustomed to humans.  We are warned not to touch them and to get into “the dolphin zone.”

“It is so great they aren’t doing this for us.  They have the whole ocean!” says marine biologist Alexa Olsen.  “We are very privileged.”

There are only two places in Hawaii for this experience—here and off the coast of Kona on the big island.

I don’t know where to look first when I get in the water–to my side, below me…the dolphins move so fast!  We are so close we hear their high-pitched “conversation.”  They seem oblivious to our presence. “Just relax and take in the experience,” our guides urge us, asking us to be mindful of how our environmental carelessness can harm these magnificent creatures and others who live in these waters.

The other families on the boat are equally entranced.  Cole Casey is traveling with his 11-year old son Hunter and brand new fiancée (they got engaged atop Diamond Head) Chelsea McLean and have used their hotel as a base to explore all of Oahu.  “The best was my son tugging my foot and I turn around and there is a sea turtle three feet from me,” says Cole Casey, an attorney from San Diego.

Colleen Keegan is traveling with her three kids, wife, and mom from LA on the kids’ first trip to Hawaii, and they are thrilled by this morning’s adventure.  “Waikiki is good for the pool and the beach, but most everything else is beyond Waikiki,” says Kristin Veivoda.

We saw all varieties of fish—many of which only live here as well as a moray eel and a sea urchin that we carefully pass from hand to hand.

I can’t believe there is this underwater paradise just off shore from where we are staying and where Disney is building its new Aulani Resort (www.disneyaulani.com).  I wonder how this turtle spa will compare to theirs.

We get another dose of the “other Oahu” when we venture up toward the north shore with Walter  Keale Mix, the new ranger for the 1,463 acre  Ka’ena Point State Park  and a local expert on Hawaiian history and culture.  As we hike toward the famed Ka’ena Point, passed crashing surf, we meet locals harvesting their own salt and learn that traditionally the point is where Hawaiian spirits—after they died—came to jump so that they could return to their “netherworld.”

He laments that too many tourists don’t get beyond Waikiki Beach with its restaurants (where we incidentally had terrific sushi at Doraku (www.dorakusushi.com) and shops that range from bobbing hula dolls to high end jewelry—designer store after designer store lines the area.

Keale, who traces his ancestry back more than 1000 years, encourages tourists to “talk story” with any Hawaiian they might meet–the woman cleaning your room, the waitress at the restaurant.  “I’ve seen many doors open like that,” he promises.  ”It comes when you least expect it.”

“You can get as much of Hawaii as you want right here on Oahu,” he says.  “You just have to get below the surface.”