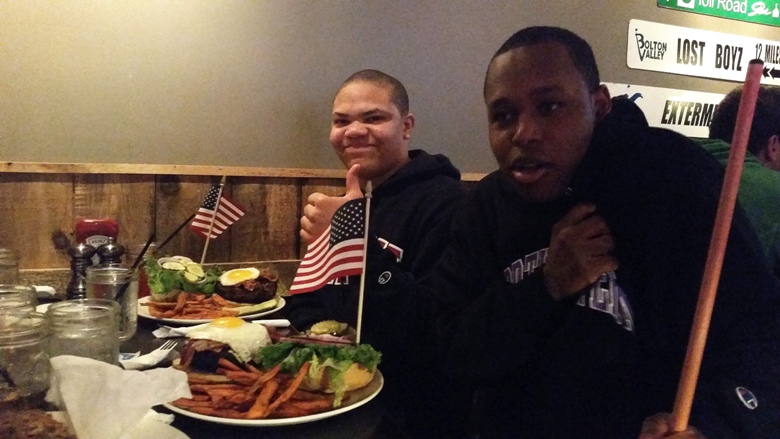 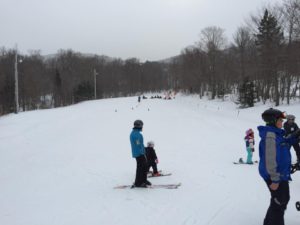 Snowboarding lessons on Mighty Mine

BOLTON VALLEY, VT — March 21st was the first day of Spring, but Mother Nature had other plans for the boys from A Better Chance of Westport, CT. With a storm on its way, Westport Public Schools declared an early dismissal, and the boys left for their trip ski trip several hours ahead of schedule.

“Our backyard is a 5,000 acre playground buried in 300 inches of annual snowfall with a powerful snowmaking system to lend a hand when Mother Nature needs a breather,” was the scene described on Bolton Valley’s website. It was prophetic.

When we arrived after a five-hour drive, it was still daylight and we were amazed by the beautiful views of the Green Mountains. David Sochol, a chaperone, said: “The scenic view was worth the drive.”

After settling in, we went to James Moor Tavern, a convenient bar/restaurant at the resort, and a few boys ordered “The All American Burger”, which is a half-pound beef patty, topped with bacon, cheddar cheese, a secret blend of spices, maple balsamic onions, lettuce, and tomatoes on a toasted roll. 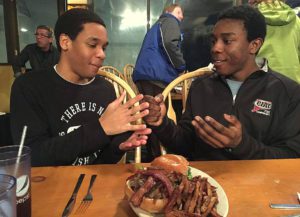 To Mannasses Ogutu and Samuel Larkin, both sophomores, the most memorable moment about “The All American” was what came before either one of them had a taste of it. Because the burgers took time to cook, they were served when they were cooked. Problems did not arise until close roommates Mannasess and Samuel had to decide who would eat their first burger between the two.

After a close consideration of a stand-off, they settled it with a competitive game of “Rock, Paper, Scissors.” Samuel was defeated, and Samuel commented, “That just means my food will be hot when it’s out.” In contrast, Mannasses described the burger as “legit.” “The seasoning, the spices, the blend, all coming together is what made it delicious,” Mannasses continued.

The stellar first night in Bolton Valley ended with a great performance from the Woedoggies, a folk band based in northern Vermont. Junior Thomas Jones thoroughly enjoyed the band as he hit two utensils together, keeping in rhythm with the Woedoggies.

With snow flurries in the forecast, Saturday dawned with promise of a great day of skiing and snowboarding action. Before our lessons, everyone gathered for fresh breakfast sandwiches at the Bolton Valley Deli, a mini-store that I am convinced had everything one would need to survive for a few days. Then, we gathered our gear and made our way out to the snow.

All suited up and ready to go

Every snowboarder took on the biggest challenge that a 4-year-old could ask for: “Mighty Mine.” It’s a very short, not-very-steep hill that is available for all new riders, and it primarily serves as an easy warm-up before heading to other trails.

After a few falls, the scholars made way to their ski/snowboarding lessons. Our instructors, Nicko and Greg, led the group in various technique exercises before we finally went on to longer, more complicated trails.

Second-time snowboarder, Ali Sanoh, a freshman, struggled the first few times as he rode through the long trails. “I’ll get better with a little more practice,” admitted Ali.

Ali was not the only scholar with difficulties. Two years ago, I snowboarded for the first time at Bolton Valley. After losing my patience, I did not want to return to snowboarding. However, looking to redeem myself, I returned to Bolton Valley this year.

I felt confident off of Mighty Mine, but the longer trails were the end of me. I learned the techniques, but I repeatedly fell and bumped into trees. Watching me falter, Nicko and Greg both shared personal advice.

“When I get mad, I get mad at the board. Because I am mad at the board, I take out my anger on the board by making it do what I want,” said Greg. After this word of advice, I rode for 10 seconds before crashing into another tree. Nicko attempted to comfort me with a personal anecdote. “Once when I was snowboarding, I went off the trail, and I fell into a river. I thought I was going to die, but then, I realized I was nine years old, and I could just walk.”

The instructors were very encouraging, and they motivated me enough to snowboard down the mountain. Despite the encouragement, the end of the lesson was the last time I snowboarded for the entire trip.

In the evening, the group traveled a few miles from Bolton Valley to Waterbury, where we ate dinner at The Reservoir. The restaurant serves (no pun intended) as a landmark for a peculiar A Better Chance tradition. One graduate, Ruben Guardado (class of 2015) once ordered “The Truck Driver” burger, thus starting the tradition.

Although Adrian was unable to finish the burger on one try, he did provide advice on how to prepare for the big burger: “Don’t eat anything before (you eat The Truck Driver). Don’t drink anything either, the soda will slow you down.”

The ski trip was a perfect time for the scholars of A Better Chance to bond together as a house full of guys who feel like we are brothers. We face daily pressures of needing to maintain high grades and build our characters in this world. Desperately needing a break, this trip allowed us to recollect for recreational activities and bonding time that we greatly enjoyed.

Christopher Morales is a junior at Staples High School and a scholar with A Better Chance of Westport, CT, which Taking the Kids is proud to support. Thanks to Bolton Valley Resort, The Chill organization in Burlington VT, and the Reservoir Restaurant and Tap Room in Waterbury for generously supporting this annual outing.