Breakfast with the Grinch and a visit to Universal Studios Orlando 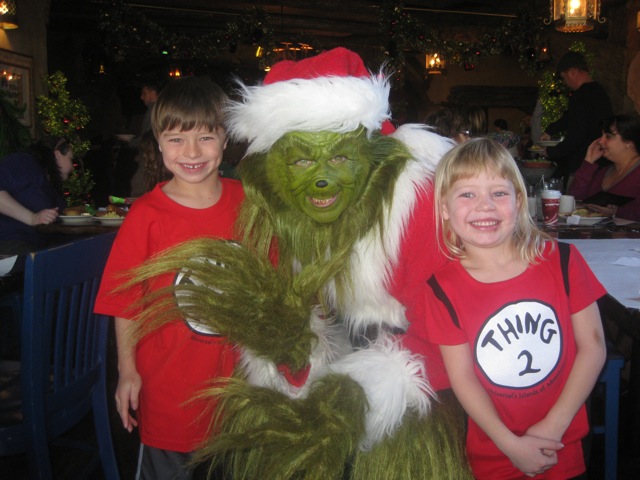 Guest Diarist for Taking the Kids

ORLANDO, Fl.  — Day 1:  We had decided that this was the year that we would spend our Christmas Holiday break in Orlando and let someone else decorate and put up the Christmas tree back in Golden, Co.

On our plane flight to Orlando, in between watching movies on mom and dads iPad, our five-year-old Hannah and her eight year-old brother Ethan continually practiced the three words they had for the Grinch—Stink, Stank, Stunk!  They were so anticipating our first full day in Orlando and the first event on our calendar; Breakfast with the Grinch™!

We arrived at Universal Studios Orlando for our big day and decided to pay for preferred parking which allowed us to park much closer for just $5 more.  We made our way to the Confisco Grille® and our breakfast date with the Grinch.  We sat down and before we all had a chance to go through the buffet line, we had a nice encounter with The Cat in the Hat.

The Cat put Hannah and Ethan at ease and got them excited to see the Grinch.  Pretty soon, the big, green not-so-handsome guy made his way over to the table and immediately began working the Cat over and making everyone laugh.  The kids were laughing, yet still not convinced that they wanted to get too close to the Grinch, or tell him those three words they had practiced.  The food was typical buffet style breakfast and featured Green Eggs and Ham, which was better than expected.

After we were finishing up, the Grinch made a return trip and Hannah gained enough courage to tell him that she had three words for him.  She proudly said Stink, Stank, Stunk and the Grinch smiled and said that he gets that often which made the kids laugh.  They warmed up to him and it really set the tone for a wonderful start to our Holiday vacation.

We went through the Islands of Adventure hitting most of the rides and using the Express Plus lane (highly suggested) which is very convenient and cuts down on waiting time.  The kids love being here and each ride was a celebration of our time together as a family.  As they say in Suessville, “Old, young, big, small, this will be the best Christmas of all!”