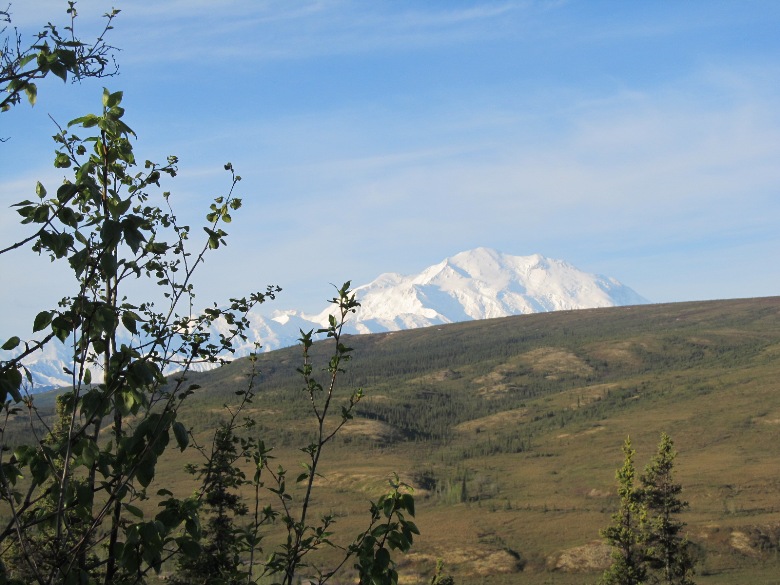 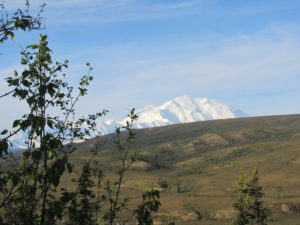 View of Mt. McKinley from the Camp Denali on a clear morning in June 2012

DAY THREE IN CAMP DENALI — I am trudging straight uphill in spongy tundra in a downpour. In Alaska.  It starts sleeting. We stop for lunch and picnic in the downpour.  We don’t have rain covers for our packs so everything is soaked—including our sandwiches and the spare socks we brought in case our socks got wet.

Are we having fun yet? Absolutely! We are in American’s last great wilderness, Denali National Park on one of the few guided hikes permitted at the north end of the park because we are staying at Camp Denali which is 95 miles inside the park and is celebrating the its 60th anniversary the week we visit in  June 2012.

“It was such a thrilling experience to explain a world that was so foreign to a glacier, the tundra, the wildlife,” said 88-year old Morton “Woody” Wood, the only one of the three founders back for the anniversary weekend. His former wife, Ginny Wood, now in her nineties, was too frail to come. Their other partner, Celia Hunter, has died.

Wood showed us a film after dinner of the building of “Camp” as they call it—hauling logs with a World War II surplus jeep, sawing huge trees with hand saws, giving climbers who successfully summited the largest mountain in North America (20,320 feet!)  a free spaghetti dinner. He summited the mountain more than once, almost dying in one attempt.

“We must have had a lot of energy, not much in the way of brains,” he chuckled.

That tradition continues today. Despite the downpour on the Alpine Tundra—our guide Catherine Schake, 27, who is spending her seventh season guiding, stops to point out the different wildflowers on the Thoroughfare Bench, as this is called—no trail here, just up, up, up on the tundra, crossing rocks and some snowfields. We are in the north side of the park about 23 miles from the end of the road where “Camp” is located.

We bend in the rain to look at pink Alpine Azalea, purple Lapland Rosebay, cow parsnip, and a giant pit a bear has dug in search of a tasty ground squirrel. We saw a magpie and golden eagle soaring overhead.  The Tundra is so spongy underfoot!

“Imagine those early climbers,” says Schake. “They didn’t have the kind of gear we have. Imagine the animals that can’t leave when the weather is bad.”

But then it stops raining and the views are astounding—the McKinley River below, the snow covered mountains above, the Tundra dotted with wildflowers I’ve never seen before.

“I like always getting up in the morning and seeing the mountain,” said 15-year-old Fiona Bruce, here with her family from Anchorage and whose grandparents got engaged at Camp Denali after her grandfather successfully climbed the peak. ”And it is so relaxing here.”

That’s likely in part that may be because we are off the grid–there is a place to charge our electronics but no cell service and no internet. I love that!

But there’s just so much being off the grid a kid can take. Emery Schoenly, 20, a college sophomore, is here as part of a grand Alaska family trip to celebrate his brother’s college graduation.  “I enjoy being with my family without an distraction,” he said. “Three days is very doable.  A week might be a little much.”

That’s exactly why his parents Newton and Barbara chose a place like this, they said—to maximize their time together without distraction. “And we all love nature,” Barbara Schoenly added.

I can’t think of a better place to revel in the wilderness.  The clouds finally cleared overnight and we wake up to astounding views of Denali right out of our cabin window!  Wow! It is huge!

Every year some 1500 climbers attempt the summit and fewer than half will make it. There are almost always fatalities—six so far this season.  We happen to be here in the heart of the climbing season which only lasts from May until early July.  As we drive along the road to our hiking spot, we are less than thirty miles from the mountain.

Kari Gardey, who lives in Anchorage, says she has camped and explored this national park with her kids since they were small.  Even the 90-plus mile ride that takes hours into the park doesn’t faze the kids, she said—not with the chance to spy bear cubs, Dall sheep and Caribou. It’s even better later in the summer when there aren’t as many mosquitoes and plenty of blueberries everywhere.

Catherine Schake, our guide, says there are often kids on the hike—in some cases so many staying at Camp Denali and NorthFace Lodge that there are special family hikes offered.

But in other cases, there are just enough young  hikers to  infuse an adult hike with extra energy.  Her tips would work for any hike:

–Play 20 questions or Eye Spy (imagine that in an Alpine Tundra).

–Look for something of a particular color. (How about purple?)

— Keep your eyes open for scat!  Then figure out which kind of animal left it.

“The kids keep the energy up and are always happy to be here,” Schake says, reassuring parents who might think the trip here too arduous.  There are cabins that are designed for families too.  Last Chance, for example has bunk beds. Bedrock Hilton has two small rooms, one with two twins. Some of the rooms at neighboring North Face Lodge are similarly equipped.

Though there are indoor bathrooms and individual showers at North Face, the price is the same.. “Some people just want the rustic experience,” she says.

We love it. On our bus ride back to camp, we see West Horned Grebes that are nesting, Green- winged Teals, red necked Phalaropes.  (I might become a birder by the end of our stay1)   At dinner, one of the birders in the group noted that he saw 25 species today—along with two Grizzlies.

That’s Denali National Park for you.

We stop at the Eielson Visitor enter—a little more than 66 miles into the park, this is about as far as most people get– to see an astounding quilt—a year’s work  created by local  artist Ree Nancarrow—Seasons of Denali.  It is spectacular—done in six panels with wildflowers and golden eagles, bear and caribou, even a frog we learn, a ranger discovered there were frogs here when he went out to Wonder Lake to chip ice for his martinis (my husband, a martini drinker, loved that story).

Nancarrow, who lives at the east end of the park and also is part of the Camp Denali anniversary celebrations said she wanted to capture what visitors might see right out the window of the visitor center—if it wasn’t raining or misty, of course.  I could look at that quilt all day.

But we had to head out on our hike.  I thought it would be a mellow walk in the tundra.

No such luck. We start at 3700 feet and gain 700 feet in altitude though it felt like 7000 because we were going straight up—in the rain.  All we hiked was a mile and half.  Even the best rain gear couldn’t keep us dry.

We got back on the bus to welcome cups of hot tea.   We were soggy but smiling, which is the point, of course. 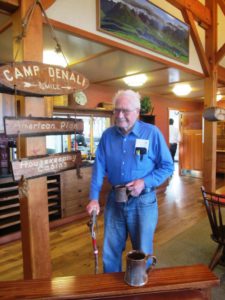 I’m trying to imagine how three young people visualized their dream here 60 years ago. They arrived in the summer of 1951 to the mining district of Kantishna, just north of Wonder Lake and the northern boundary of Mt. McKinley National Park.  Celia Hunter, Ginny Wood and Morton (Woody) Wood were seeking some land to homestead within view of the tallest peak in North America.

Their dream: To build a simple, rustic lodge and cabins where park visitors could come and “savor the vigor and freshness of this young country and absorb its spacious tranquility.” Hiking up an untracked ridge on a tip from park superintendent, Grant Pearson, they discovered the ideal spot, complete with rocky ridge and small pond.  That fall, Hunter homesteaded 67 acres of that ridge, centered on Nugget Pond.  The founders built Camp Denali with locally-harvested spruce logs and reclaimed materials from the National Park Service, often with the help of friends and visitors who helped  haul logs, hack out a road, and build, Woody Wood said as he showed old movies.  The three ran Camp Denali together in its first decade and then after Ginny and Woody divorced, the two women remained until the mid seventies when they found new owners with as much passion for the park and Alaska and Camp Denali as they had..

Enter   Wally and Jerryne Cole.  Wally had first come to the Park in 1959 from his home on the Maine Coast to work here, meeting Jerryne. They eventually made the Park their permanent home and with their two kids, Land and Jenna, operated Camp Denali from 1976 until 2008.

In 1986, North Face Lodge, a lodge that was built in 1973 on the homestead of Superintendent Grant Pearson, came up for sale.  In order to forestall unchecked development on this prime 5-acre parcel in view of Mt. McKinley, Wally and Jerryne enlisted the generosity of numerous former Camp Denali guests for the acquisition of this unique location.  Today, North Face Lodge operates at the same capacity as when the Coles acquired it.  A few years after this acquisition, the Coles incorporated Camp Denali and North Face Lodge under the name Denali National Park Wilderness Centers, Limited.

Now it is the next generation’s turn. In 2009, Wally and Jerryne formally turned over their business to their daughter, Jenna, and son-in-law, Simon Hamm, now in their thirties and the parents of two young children.  Jenna spent most summers of her life at Camp Denali;  Simon made his first trip to Alaska from his East Coast home in 1997 with the goal of climbing that preeminent mountain of Camp Denali’s southern skyline, Denali.

They are continuing the ecotourism tradition started by Morton Wood, Celia Hunter and Virginia Hill Wood 60 years ago.  “It is such a good model,” Jenna Hamm explains. “We want to help visitors to have an experience that is eye opening—to connect between the natural world and their lives at home.”

Simon Hamm notes that they require their naturalists to commit for three years and that the ratio of staff to guests is almost 2 to one.  Camp Denali generates its own power, produces its own water, grows its own vegetables and bakes its own breads.

“What I’ve learned in 88 years, Morton Wood said, “Iis what is important in life is to relate with other people and other living things… To see a moose and a baby…  To stop on the Park Road as a herd of hundreds of caribou pass by.  It is a thrilling experience to explain that world to visitors.”