Can flying actually be fun? Yes, but more likely on a foreign carrier 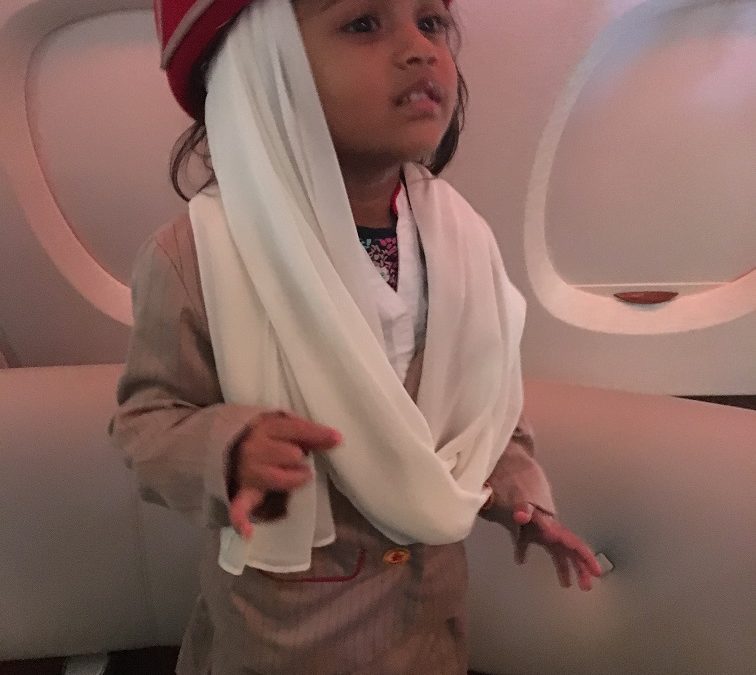 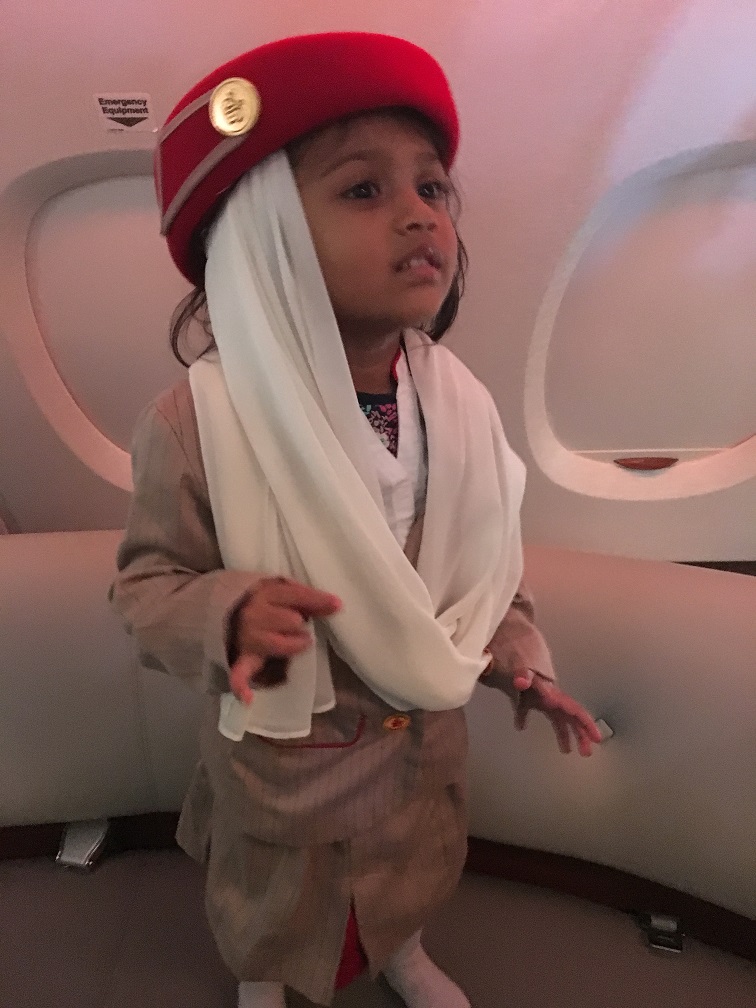 Is it possible for a long flight with kids not to be tortuous?

Perhaps, if a flight attendant invites a little girl to help serve, or walks through the cabin offering kids their choice of age-appropriate toys and Polaroid photos of them in captain or flight attendant hats.

“It makes their flight,” said Luisa Jangemi, a longtime flight attendant and mother of twins. Jangemi now trains Emirates Air staff, teaching them how to “engage” the littlest passengers.

There are toys for babies, animals (a monkey, panda, lion or camel with a cozy blanket inside; “a “Find Your Way” Lonely Planet activity book for older kids, another “Fly with Me” animals activity book, a travel journal that captain will sign, an Etch A Sketch and a messenger bag to put it all in. One 2-year-old on board is decked out in a mini flight attendant’s uniform, including the distinctive red hat with white veil (for sale for $57). There is also a captain’s uniform.

“The kids select what they want and they and their parents are surprised by the choices,” said Catherine Sourial, the purser who oversaw the cabin crew on my recent flight

Parents traveling with babies and toddlers appreciate the diapers, wipes and baby food and the bassinets. All parents and kids like the freshly prepared kids’ meals and so many channels of kids’ entertainment, so many they couldn’t possibly watch it all, even on a 15-hour flight. And when you arrive, there are complimentary strollers waiting at the gate.

If you’re thinking you wouldn’t find these amenities on an American carrier, you are probably right. “In the United States, you don’t see a lot of airlines offering amenities for kids,” said Brian Sumers, who covers airlines and aviation for the travel industry website Skift.

In fact, international carriers seem to be upping the ante for service, especially for families, while American carriers are facing increasing push-back from customers over their behavior and lack of customer service — consider the latest case where a man holding a valid ticket was forcibly ejected from a United flight in Chicago to make room for a crew member.

As the furor mounts around the world over the United Airlines incident and the company’s bungled response, Emirates released a new commercial making fun of United and reminding the public of the many awards it has won in the last year. United — along with American Airlines and Delta Air Lines — has been highly critical of the Dubai-based airline, lobbying to curtail their access to the U.S. market. The video, mocking United’s motto, concludes “fly the friendly skies … this time for real.”

“But, hey, in 2016,” Sumers mused, “American Airlines brought back wings for kids. It’s a minor thing, but kids love them — at least I did when I was 7.” United also presents kids with wings, a spokesman said, and has some kids’ entertainment and kids’ meals. 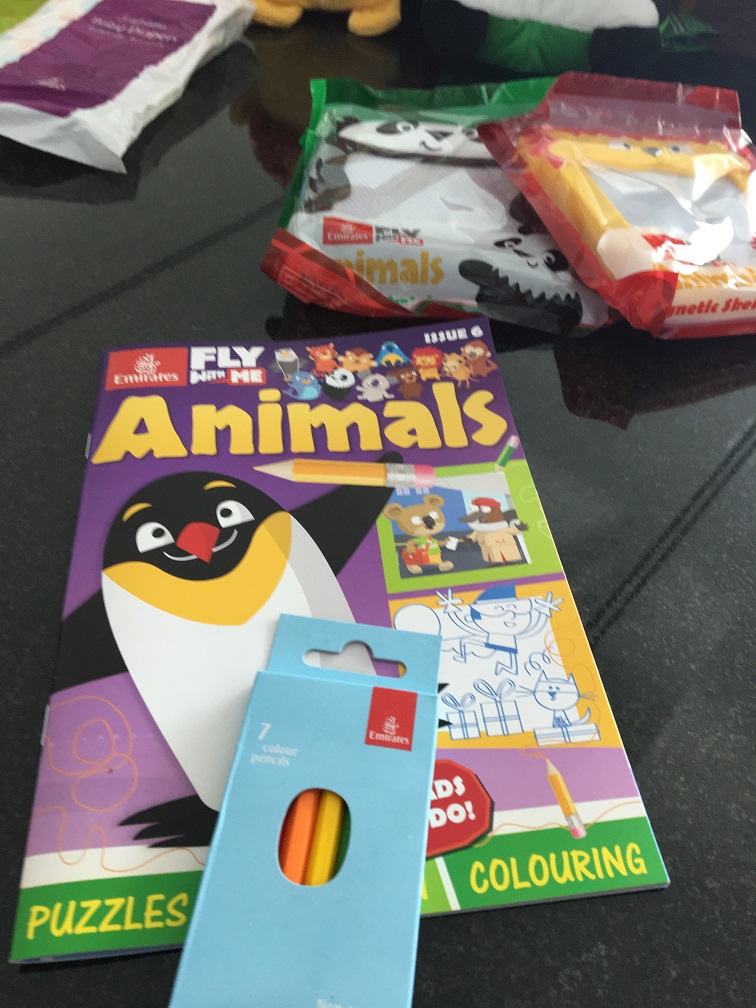 Emirates Air, which has greatly increased its U.S. presence, including flights to Milan and Athens, takes customer service so seriously that only 4 percent of those who apply are accepted for flight crew training.

The best part: Kids get all the same amenities and attention whether they are flying coach, business or first class. It also seemed to me on the A380, the largest aircraft flying, the legroom in coach was akin to what you find in many economy plus sections. “Quite spacious,” agreed Archana Mathur, traveling with her husband and two young sons in economy.

Certainly, other international carriers pay attention to the littlest passengers with bassinets for babies (reserve in advance!), kids’ entertainment and meals (also reserve in advance). “It’s just as important as knowing the kind of seat and environment on the plane,” said Jack Ezon, president of Ovation Vacations, one of NYC’s largest travel agencies. Check what the airline will offer your family before you book:

Norwegian Air offers in-flight kids’ entertainment, including video games and kids meals. Even better, kids 2 to 11 can fly for 75 percent of the adult fare. (Ask if children’s discounts are available the next time you book flights internationally!)

British Air, has a “Feed Kids First Policy,” which families appreciate, and a Skyflyers activity pack.

Lufthansa has new family counters, complete with Lufthansa mascots Lu and Cosmo, who greet kids at Frankfurt and Munich airports, diaper changing stations in restrooms, as well as a kids’ menu designed with the help of a jury of children.

Air New Zealand touts its Skycouch, a seating option which combines three seats into a flexible space that is ideal for families. And those kids traveling solo get a special Airband that provides parents notifications of each step of their flight.

Etihad Airways has gotten a lot of traction for its flying nannies, trained flight attendants who might do face-painting or magic tricks, though there is likely just one on board.

But “Emirates is certainly among the best at catering to kids — there’s no doubt about that,” said Skift’s Brian Sumers.

Emirates, Quantas and other airlines now have added kids’ areas to their business- and first-class lounges, as more families are opting for that class of service. Before kids zones, said Australian blogger Penny Reidy, creator of Itchy Feet Family, “families were always on edge making sure not to disturb the business travelers.”

Until I flew Emirates, it had been my experience that it is up to the parent to think ahead for everything they might need and then entertain the kids on board.

“It’s hard enough to get people to discipline their children and keep them from terrorizing other passengers,” said American Airlines flight attendant Steffanie Rivers, who has written a book about traveling with kids and pets. “If they expect us to provide diapers and toys what’s next, nanny service while they get drunk in first class?”

These days on many airlines, if you want to guarantee seats together, it is often necessary to pay extra.

Samar Habayeb was flying home to Dubai with her mom and two-week-old son, Sammy. She said her two young daughters are as big Emirates fans as she is, though now with the ban on electronics other than cellphones on flights from Dubai and other predominantly Muslim cities, she may have to find other routes because she and her husband count on flights to work, especially because the kids are so well entertained. (For more about Emirates and Dubai, read my trip diaries.)

The baby slept most of the way home.