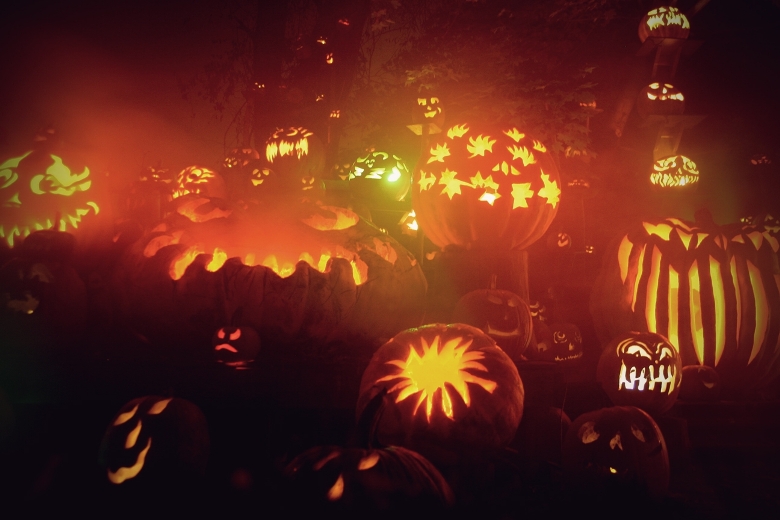 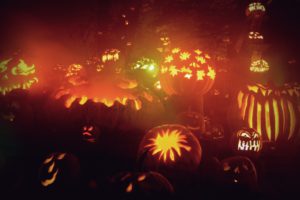 Neighborhood trick-or-treating is so old school.

It only lasts one night, after all. What if it rains — or snows? What if it’s cold? (Coats really don’t add much to a princess or vampire ensemble.) What if one of the kids is sick? What if you’re stuck at work, despite your best efforts to get home early?

Besides, do the kids really need five pounds of candy? Do you? (Yes, I’ve been that mom combing through the Halloween-decorated pillow case looking for my faves after the kids have gone to sleep.)

The good news: These days you aren’t limited to one day or one neighborhood. You can take your pick celebrating Halloween at zoos (see 5,000 illuminated jack-o-lanterns created by team of professional pumpkin carvers at the annual Jack-o-Lantern Spectacular at the Roger Williams Park Zoo in Providence, R.I. aquariums (the Wildlife Conservation Society’s New York Aquarium where Ascarium weekends, promise spooky stories, music and magic shows, as well as trick-or-treating and even planetariums (Chicago’s Adler Planetarium is hiding some mysterious characters in their galleries. Once found, they will mesmerize you with spooky tales). For a complete list, check out my seasonal travel tips section.

And more hotels are getting into the act, if you want to get away from the neighborhood entirely. Fly to Ireland and check in to the historic Ashford Castle for a “Hogwarts Halloween” celebration where Harry Potter’s magical world of witches and wizards come to life. The castle’s secret rooms, hidden alcoves and mystical surroundings of secluded woodlands give Ashford the ideal setting for magicians in the making. After all, sorcery and magic at the historic castle date back 700 years, so who knows what will happen this year? But this isn’t for anyone lamenting how much it costs to give out candy to the neighborhood kids.. The two-night package is priced at 950 Euros ($1,361/per person USD).

Closer to home, Loews Hotels has you covered with their Spooky Suite package that includes costumes from Party City, the go-to Halloween supply store. Park City’s costume concierge will assist in styling adults, children and pets for the hair-raising holiday. The Loews’ Spooky Suite package is available Oct. 25 through 31 at 13 Loews properties. Rates start at $207 per night and include a stay in a Halloween-themed suite, costumes and more.

Across the country, meanwhile, the Great Wolf Lodge Niagara Falls — Canada’s largest indoor water park with 13 waterslides and four-story water fort — transforms at night through October 31 to Howl-O-Ween at the Wolf with a trick-or-treating trail that coils through a haunted forest, costumes contests, pumpkin carving, spooky story time and even Wolf science.

Check in to a haunted inn. The website Bed and Breakfast Finder touts more than 200 haunted bed and breakfast inns around the country where all kinds of supernatural occurrences have been reported.

Take the kids to visit a haunted lighthouse. The Point Sur State Historic Park and Lighthouse in Big Sur is commonly listed among the top 10 haunted lighthouses in America. Or try a haunted ship. The Mystic Seaport in Connecticut’s Sights and Frights has activities that are “Family-Friendly,” “Mildly-Creepy” or “Not for the Faint of Heart!”

Take a ride on the Ghost Trolley of Monterey, Calif., or on a Ghost Boat on the Wisconsin River. The Grand Canyon Railway’s Pumpkin Patch Train isn’t haunted but promises it will take you to a “secret pumpkin patch.” (Yes, the kids get a pumpkin to take home.)

Growing numbers of families these days make it an annual tradition to hit a theme park for Halloween, whether the kids are toddlers or teens.

There’s Disney World’s immensely popular Mickey’s Not-So-Scary Halloween Party and Mickey’s Halloween party at Disneyland where you can also get up close and personal with your favorite Disney villains. (The Halloween parties require extra admission.)

Head to SeaWorld’s Spooktakular in Orlando and San Diego, with special Halloween shows and the chance for your kids to strut their stuff, showing off their costumes while dancing with life-sized, but not-too-scary, sea creatures.

Walk through the “Haunted Harvest” cornfield maze or visit Linus’ Foam-tastic pumpkin at Knott’s Berry Farm’s “Snoopy’s Costume Party” in Southern California, where your little witches, princesses and ghosts can sing and dance along with the Peanuts gang at the “Peanuts Halloween Spooktacular.”

There are plenty of other places to scare yourself silly too. Weekend nights through October, Howl-O-Scream transforms Busch Gardens Tampa Bay, Williamsburg and SeaWorld San Antonio into the ultimate scare zone with devious creatures infesting haunted houses, scare zones, shows with “psychotic” surprises and, of course, bone-chilling roller coasters.

Could you possibly bond with your teen at one of these scare fests? I did one year in Orlando at Universal Orlando’s Halloween Horror Nights, which delivers on its promise of Halloween frights that cannot be experienced anywhere else. Expect bloodthirsty beasts, haunted souls, way-too-scary haunted houses and even frightening stage shows.

We screamed till we were hoarse.

Got your witch’s hat ready? I do.