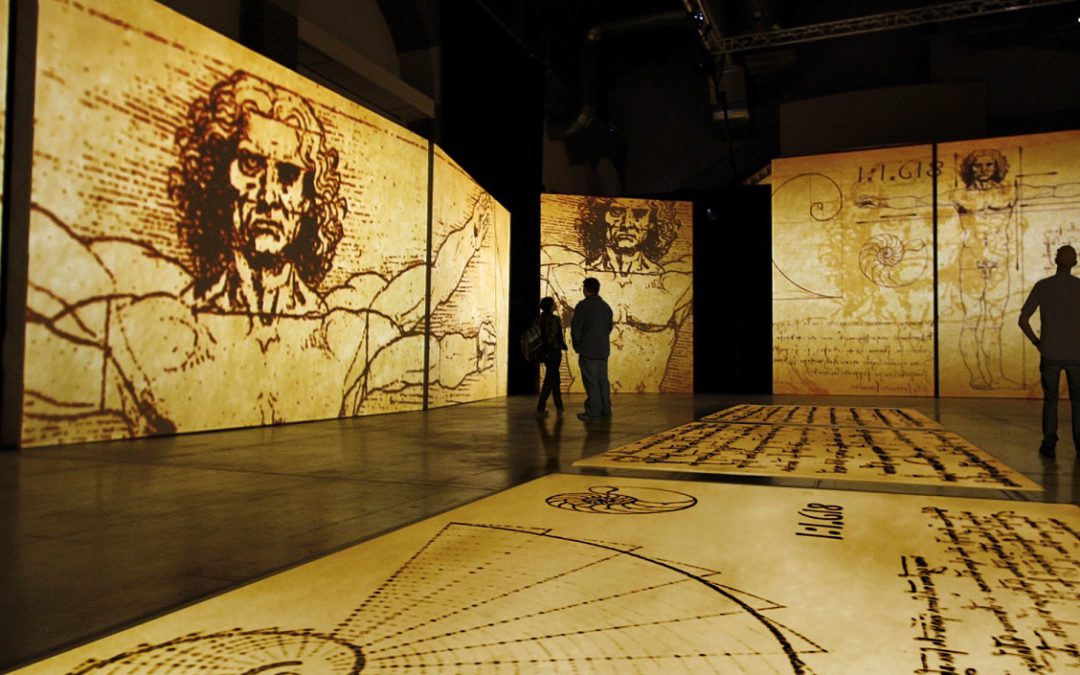 Leonardo da Vinci would have been impressed!

We’ve time-traveled back more than 500 years to meet those who knew him, and then back to the 21st century where the latest technology has figured out why the Mona Lisa doesn’t have eyebrows and eyelashes.

Welcome to the new “Leonardo da Vinci’: 500 Years of Genius exhibit at the Denver Museum of Nature & Science, which runs until Aug. 25. (Get your tickets in advance.) This year, on the 500th anniversary of his death at age 67, there are numerous exhibits around the world devoted to “The Maestro,” including “Leonardo da Vinci: A Life in Drawing.” Twelve participating museums from Britain to Milan where Leonardo created “The Last Supper” are getting in on the action with “Leonardo and His School in the Ambrosiana’s Collections,” a quartet of exhibitions that will run consecutively at the Pinacoteca Ambrosiana through January 2020.

At the Louvre, “Leonardo da Vinci,” which has been 10 years in the making, will open in October. It is billed as the most comprehensive exhibition ever dedicated to the acclaimed artist. The museum already owns five of the 15 extant Leonardo paintings, including, of course, the Mona Lisa.

Before visiting the Denver exhibit or one of the ones abroad, check out the fun Leonardo Interactives from the Royal Collection Trust. (Let the kids try the “Face Facts” rules he used when drawing the head and face.

“Have the kids play with water, spinning wings, wheels, etc., to get an idea of some of the principles that Leonardo was thinking about and working on,” suggests Dr. Stephen Nash, the chair of the University Anthropology Department, who curated the Denver Museum of Nature & Science exhibit.

Remind the kids that Leonardo came from a poor background and never got a traditional education, but his gifts were still recognized. He was apprenticed at age 14 to Verrocchio, one of the most famous Florentine artists of the time.

Visitors likely will be surprised — as was museum staff, said Nash, “That his greatest contributions weren’t necessarily artistic. They had to do with human anatomy, the natural world and more.”

The Denver exhibit with more than 70 of da Vinci’s machine inventions — painstakingly created using his detailed notes from his famous notebooks, reproductions of his paintings and the codices, the amazing books of notes and sketches, is the most comprehensive to explore the different aspects of his genius — inventor, artist, scientist, anatomist, engineer, sculptor, philosopher — and, of course, accessible to American families.

“He was STEM before STEM was a thing,” said Macy Gardner, 13, a reporter for Colorado Kids, who covered the exhibition opening. “It’s amazing that he created all of this stuff,” she said. The life-size versions of his inventions were recreated by Grande Exhibitions using the materials and techniques of 15th-century Italy after deciphering da Vinci’s intricate drawings — and some 6000 pages of notes — including deliberate mistakes the artist put in his work to guarantee others wouldn’t steal his ideas.

For those heading to the mountains to ski or later in the year for summer fun, this exhibit is a good reason to stop in The Mile High City, which has much to offer families. (Use my Kid’s Guide to Denver and Colorado Ski Country to give you some ideas!)

Nash suggests kids will especially like the exhibit interactives that were developed at the museum. Kids will get the chance to fire a miniature catapult, draw a self-portrait using perspective and optical trips or construct a self-supporting bridge (da Vinci designed it for soldiers to put together using small tree trunks found at the edge of a river — without the use of ropes or nails. (It’s not that easy to do!)

Check out, his model of an “Ideal City” that he hoped would prevent the spread of disease or his scuba gear, parachute, tank and vertical flying machine.

“Can you imagine … a man flying … it is against nature!” said “Francois,” who claims to have worked for The Maestro. He is one of the costumed and engaging historical enactors who bring Renaissance Italy to life for visitors.

“Lenora Strozzi,” a mother of three and woman of the court, explains she has known “The Maestro” since she was a child and that “he enjoys a good laugh!” Kids in the 21st century will have a hard time imagining a world before chocolate when water wasn’t safe to drink so kids drank watered-down beer and wine instead.

Leonardo famously took a scientific approach to art, secretly dissecting corpses by candlelight to better understand human anatomy. Though much of his art has been lost, two of the most famous — The Last Supper and the Mona Lisa — still attract and inspire millions every year.

Last summer, we saw The Last Supper in Milan in the Convent of Santa Maria della Grazie. The huge mural has been so damaged over the centuries that only a small number of visitors can be admitted at a time and only for 15 minutes; Da Vinci’s depiction of gesture and expressions has inspired artists ever since.

For families who are in Milan, visit the World of Leonardo interactive museum first. Kids can see how vibrant the colors would have been in the 15th century, make Leonardo’s sketches come to life and create the Last Supper on a giant computer screen.

So, why doesn’t the Mona Lisa have eyebrows or eyelashes?

We learned in Denver that Scientific Engineer and Photographer Pascal Cotte spent years trying to answer that question. Thanks to his special patented camera that could reveal even the tiniest details, he concluded that Leonardo da Vinci didn’t paint her that way. The disappearing lashes and brows were most likely the result of cleaning and the paint blending with the undercoat over time.

“Curiosity is king,” said Stephen Nash, adding he hopes kids get that message from the exhibit. “Never stop wondering!”