Celebrating with the little general in Corsica 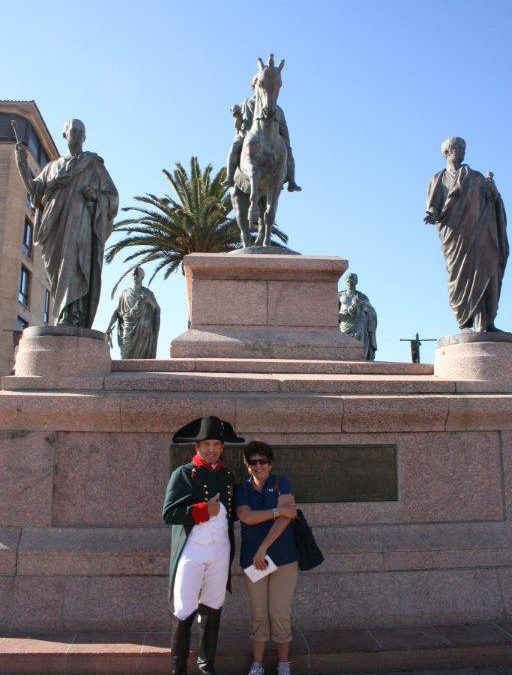 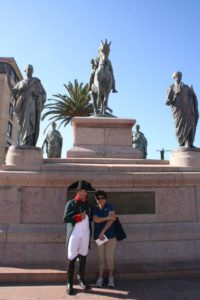 Napoleon on birthday in Corsica

The Disney Magic (www.disneycruise.com) is at Ajaccio Corsica on Napoleon Bonaparte’s Birthday- August 15.  So there will be fireworks, music and plenty of celebrating. Napoleon was born here in 1769 and raised in Corsica—until he went off to military school in France at age nine, our local guide Rolli Lucarotti tells us.

She tells us her story too which is equally compelling.  She and her husband, a London TV writer, sold everything when their daughter was eight months old, some 40 years ago to sail around the world. “We got as far as Corsica and fell in love,” she said.

It’s easy to see why with its spectacular coast, mountains and friendly people. Corsica is a terrific place. It’s the third largest island in the Western Med after Sicily and Sardinia—100 miles long by 50 miles wide!

We stop at Napoleon’s statue in Ajaccio, Corsica where the Disney Magic is docked and they are already setting up for today’s festivities.  So who do we meet? Napoleon himself, who pops out to take photos with us.  Another little Adventures by Disney Touch (www.adventuresbydisney.com).

“I like all the little things they do,” said Joe Boerio, traveling with his wife Aleli and 10 year old daughter Francesca, who opted to become part of the Adventures by Disney group onboard the Magic after doing one of their land trips in France.

Then there are the friendships forged over lunches and dinners, walking around Rome or touring a palace in Monaco.   Ten year old year old Nick Carpenter, who lives in China has bonded with 10 year old Hunter Ayyad from San Diego and nine year old Dylan Davis from Florida.  “It will be an added bonus to go home having made friends from around the world,“ said  Mickey Davis, Dylan’s mom.

Then there is how much ground we’ve covered each day. “We couldn’t have done this on our own,” said Mickey Davis, whose sons are seven and nine.

That’s certainly true here.  After our photo op with Napoleon, we hop onto our bus for an hour’s ride up a steep winding road to the tiny village of Bastelica.  Our guide explains that  most Corsicans come down to the Coast to live and work but maintain a house in the mountain villages like this one, returning every weekend to spend with family.

It’s an idyllic spot with red-roofed stone houses, geraniums blooming in window pots, laundry hanging to dry, men sitting drinking their morning coffee in outdoor cafes, stupendous views of the valleys all around.

More tourists are beginning to venture into the interior of the island now for hiking and riding trips and I’m glad we have as well.

Corsica is known for its cheese, its wine (they started to make wine some 3,500 years ago—even before the French, a fact of which they are very proud!), and their cured ham. There are so many wild boars on the island (45,000) and they are such a pest to farmers that half of them are hunted every year.  We stop to sample some of the locale foods–the cured ham, goats milk cheese and cake made with chestnut flour as well as Corsican cookies. The kids devour the excellent local bread in the basket.

Only 400 people live full time in the village of Bastelica and they wave at us as we ride a little train around the town.  (Actually, it would have been more fun to walk.)

They speak a variation of French and seem to find it amusing that we’ve made their little town a tourist stop  We learn the famous story of Sampiero Corso, who some believe Othello was based on—a famous warrior who comes home to find his young bride made a deal with his enemies to buy some of his land. Enraged, he strangles her and her brothers avenge her death by laying a trap and killing the war hero. Every year, the townspeople reenact the story complete with medieval costumes.

Later, after we’ve returned to the port, we join the throngs who are celebrating on the beach, filling the cafes that spill out onto the sidewalks, the street vendors selling everything from jewelry to children’s plastic crocs.  We ogle the big yachts that are anchored here and wonder where they are going.

By the time the fireworks start, we’ve got to be back on board.  But we don’t miss anything. They’re as good as any Fourth of July.