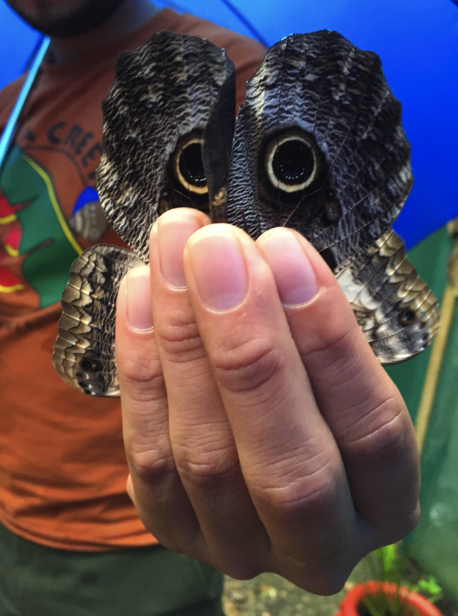 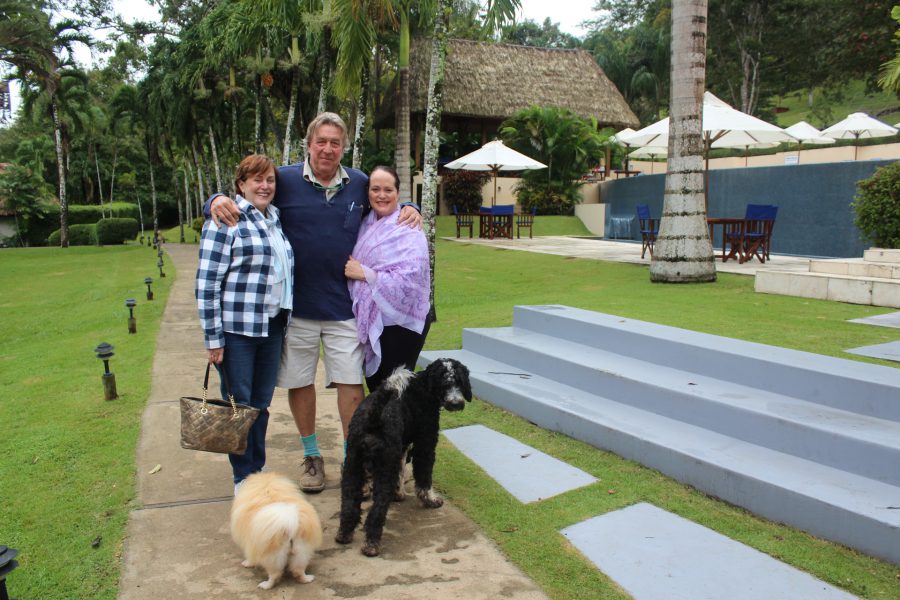 CHAA CREEK LODGE, BELIZE — Who knows where life will take you.

Just ask Mick and Lucy Fleming. Mick, who is British, met Lucy, an American, when they joined gypsies who traditionally picked apples in England in the 1970s. The adventurous duo traveled to Belize when in 1977 most business was conducted in Belize City bars.

That’s where they met the owner of an overgrown 140 acre farm on the Macal River in the Cayo District, about a two hour drive southwest from Belize City.

“When we got here, there was no electricity, no roads, no hot water or indoor bathrooms” Lucy Fleming said over dinner at what has evolved into The Lodge at Chaa Creek with thatched casitas, luxe villas with their own plunge pools and platform tent camping for those on a budget—or simply seeking a unique adventure.

There were no roads so once the couple’s farm—carved out of the jungle–had goods for market, they took them by dugout canoe on the river as the Mayans had done a thousand years before; later, that’ s the way they would transport their two kids to school in San Ignacio as well. The candy store in town took their calls as they had no phone service. 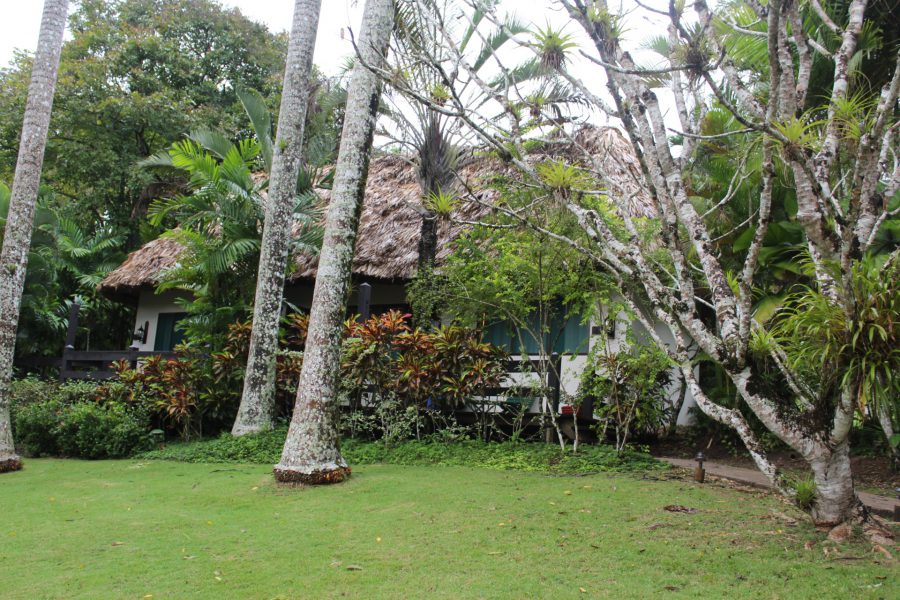 The farm was soon producing milk, yogurt cheese and eggs. Somehow in those days before social media and TripAdvisor, word spread and soon the backpacking crowd was showing up., including many young Europeans on a traditional gap year before University.

“They wanted a place to stay in return for helping on the farm. They worked for food… they were young and we were young, just a few years older than they were,” Mick Fleming, now about to turn 70, explained as we ate dinner under the stars at poolside—a far cry from those days when the couple built a guest cottage with materials found on the land, thus becoming the first jungle lodge in Belize when it opened in 1981. Indoor plumbing didn’t come until five years later. By then there were more guest cottages and staff quarters but it wasn’t until 1987 when there was electricity and washing machines. “At first we did laundry in the river,” Lucy Fleming said. “Our vision was to survive.”

And at first, the couple said, those in the budding tourism industry laughed at them—they were too far inland, too far from the Coast. People then didn’t realize how special an experience it can be here–from the Mayan ruins to caves to explore, even a Green Iguana Conservation project where you can get up close and personal with them just a few miles away. 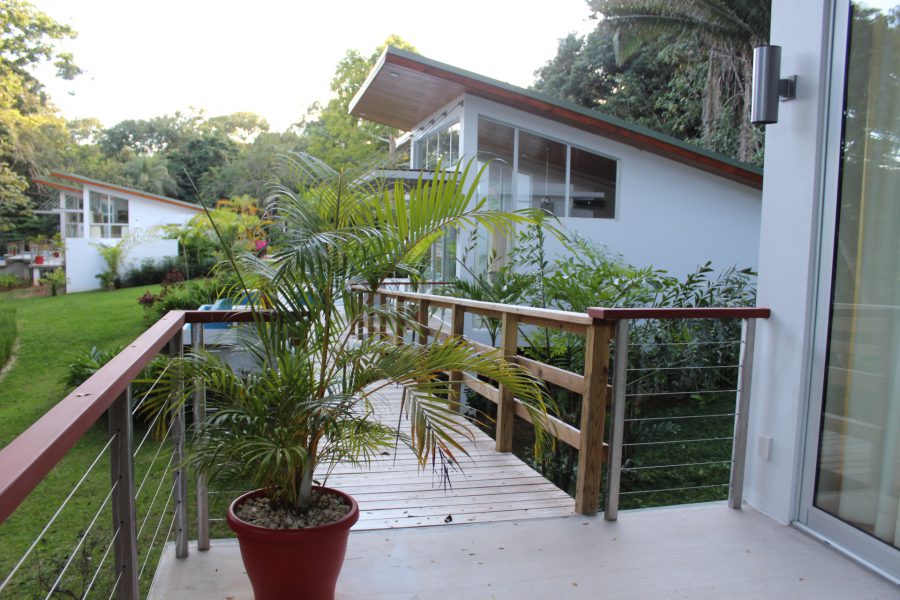 That’s hard to believe today when the award-winning property boasts 23 thatched cottage-style rooms with indoor and outdoor showers, a Spa Villa, Treetop Suite, among others and–new in 2017–the Ix Chel Luxury Rainforest Villas that can accommodate six with private butlers and the chance to spy howler monkeys in the trees while soaking in the hot tub.

At the other end of the spectrum are the 10 canvas-roofed cabins at the Macal River Camp, with shared showers and bathrooms and kerosene lamps (accommodating 44, some cozily sleeping five) and costing just $65 per person, including meals (kids sharing with parents pay less than $25 a day for meals).

Our thatched-roof suite with a porch and indoor/outdoor showers are $389 and the new villas with AC are triple that. “We want to be able to accommodate all kinds of travelers,” Lucy Fleming said. In the summer, kids from all over Belize compete by writing an essay to join a weeklong Eco-Kids camp at the Macal River Camp that can accommodate 24 kids. The program is so popular, more than 200 apply.

And through it all, the couple has stayed true to their environmental ethos—there is a fully equipped carpentry shop on the property to design and manufacture its own furniture with wood from the property. Trails were cut in the forest now offering some 365 acres in the Chaa Creek Nature Preserve—over 10 miles of hiking.

There are stables, a huge eco-friendly bi-level infinity pool built with a shallow kids’ area on the first level. The on-property bakery produces all its own cakes and breads—amazing cheesecake!

There’s a hilltop spa (fantastic massage with birds chirping outside!); restaurant bar with all varieties of infused spirits (how about guava rum or “jungle potion”?) and activities ranging from horseback riding, a butterfly farm, bird watching (over 300 species have been recorded), canoe tours, RTV rain forest tours and more.

The Flemings and their older daughter and son-in-law now run one of the largest tour operators in Belize, including packages to Guatemala and the Caribbean Coast.

Kids especially love the chance to join the Naturalist Guides on a Nature Quest Treasure Hunt in the rainforest and the Butterfly Farm with the chance to see the life cycle of three species from egg to caterpillar to pupa to butterfly, some only living only 115 days, just a few weeks as a butterfly. They land on us!

The Flemings encourage their long-time staff to interact with the guests helped because, they explain, Belizeans love to talk. “You interface with real people here,” the couple explains. “This is a true experience.”