Cheesesteak and history for all – fun in Philadelphia with teenaged boys 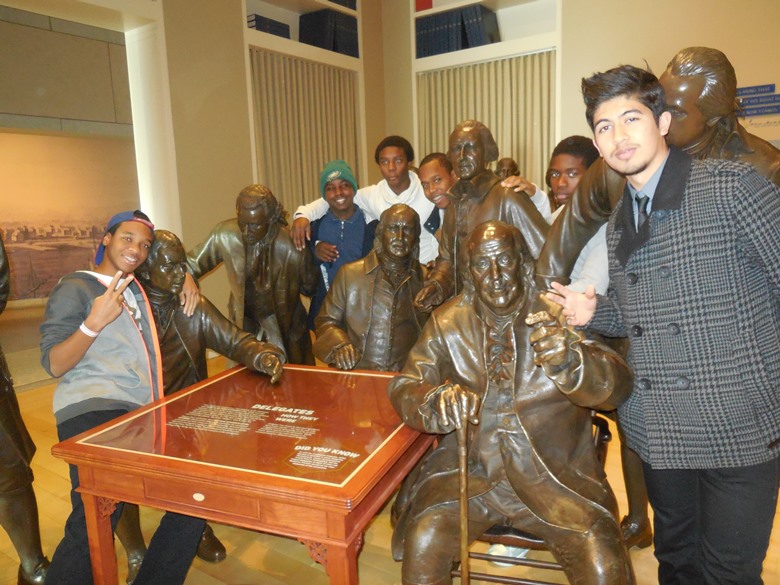 PHILADELPHIA (Day One) — Cheesesteak anyone?

After a busy day sightseeing in Philadelphia with a group of teenaged boys, we’re chowing down on a traditional Philadelphia delicacy—beef sandwiches with cheese, sautéed onions, sweet bell peppers and sauce on hoagie rolls.  We’re at Campo’s on Market Street that’s been run by the same family since 1947.

We meandered down the street for desert — The Franklin  Fountain with a line out the door and flavors like pumpkin,  Whirley Berley, Honeycomb, Cherry Butter Almond as well as more traditional chocolate, vanilla and strawberry.

The boys go to our high school in Westport CT courtesy of A Better Chance, a national program for promising inner city youth.  One of the freshmen, in fact, is from Philadelphia.

We were staying a short walk from Market Street and the main city historic attractions at the Hyatt Penn Landing where the boys gave thumbs up to the comfy beds, the indoor pool open till midnight and the plentiful breakfast buffet with made-to-order omelets. (A tip: The Phlash Bus service goes around the major downtown sites — 20 key locations in Center City and is just $5 for an all day pass.)

It’s fun when touring a city with kids — especially one like Philadelphia with such major historic sites and museums — to be able to include some good eats and an after-dinner swim.

There are also a lot of colleges and universities in the city and surrounding area.  Great place to take high schoolers on a college tour.  We were given a great ad hoc tour of the University of Pennsylvania, one of the nation’s oldest, by Jack Bubes, a student from Deleware, including a stop in Franklin Field where the ABC scholars did a lap around the track.

The National Constitution Center, established by Congress to inform the public about the Constitution, which was drafted in Philadelphia, also happens to be a great place to show kids that American history can be fun. After all, there are interactive exhibits throughout, taking part in “fantasy elections” between presidents from Harry Truman to Barack Obama, seeing themselves sworn in as president, putting on a judge’s robe to decide landmark Supreme Court Cases and playing “Presidential Trivia.”

Do you know the only president who met both George Washington and Abraham Lincoln?  Answer: John Quincy Adams. What American president received the Nobel Peace Prize after leaving office? Jimmy Carter.

Wherever possible, personal stories have been chosen to illustrate how it has been millions of individual actions that have shaped our freedom and constitutional law.

The American National Tree tells the story of 100 Americans who have shaped America’s constitutional History — chosen by school kids’ essays — and displayed in an interactive “tree,” with their pictures and  terminals  that enable you to learn more about their stories and the winning essays.

The boys gave top ratings to Freedom Rising, the multimedia theater experience that connects visitors with the story of the U.S. Constitution, thanks to a theater in the round production, an  excellent actor, lighting and surround soundtrack.

“You could spend a lot of time here,” said Adrian Blevit, a junior from New York City

“I would tell my friends to visit.  It was pretty interactive,” said Samuel Larkin, a sophomore from Atlanta, GA.

One of the Center’s most popular and iconic attractions, Signers’ Hall, invites you to sign the Constitution alongside 42 life-size, bronze statues of the Founding Fathers present at the signing on September 17, 1787.  We learn that the signers were taller than the average men of their time (likely because they came from better circumstances and had better health care and food) but were two inches shorter than the average 21st Century American man.  Ready to sign the U.S. Constitution?  You can have it emailed to yourself too! 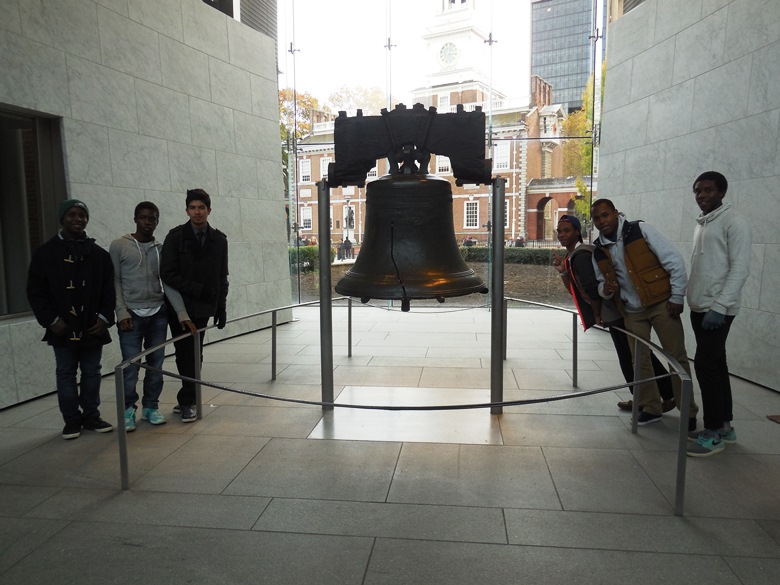 You can visit Independence Hall, where the Declaration of Independence and the U.S. Constitution were signed and more than a dozen other historic sites and museums. Kids can collect “Faces of Independence,” “Civil War to Civil Rights,” and “Heroes of the Underground Railroad” trading cards. Over thirty history trading cards are available in different locations around the park

When the Declaration of Independence and the Constitution were written here, Philadelphia was a sophisticated city, the largest of the British North America and a thriving river port.  It was known for tolerance — the impact of the Quakers, those fleeing slavery and free people of African descent as well as immigrants from around the world creating a diverse community.

The city’s most famous site, of course, is the Liberty Bell.  According to the National Park Service, the Speaker of the Pennsylvania Assembly Isaac Norris first ordered a bell for the bell tower in 1751 from the Whitechapel Foundry in London. That bell cracked on the first test ring. Local metalworkers John Pass and John Stow melted down that bell and cast a new one right here in Philadelphia. It’s this bell that would ring to call lawmakers to their meetings and the townspeople together to hear the reading of the news.

But it wasn’t until the 1830’s that the old State House bell would begin to take on significance as a symbol of liberty — named the Liberty Bell by antislavery groups in the 1830s.   The bell’s inscription, “Proclaim Liberty Throughout All the Land Unto All the Inhabitants thereof,” provided a rallying cry for abolitionists wishing to end slavery and has been an important national symbol of Liberty ever since.

Apparently, metal workers in the early 1840s widened a thin crack to prevent its further spread and restore the tone of the bell using a technique called “stop drilling”. But, the repair was not successful and the bell was silenced forever — a reminder that liberty is imperfect.