Healthy food is part of the kids’ adventure at some hotels 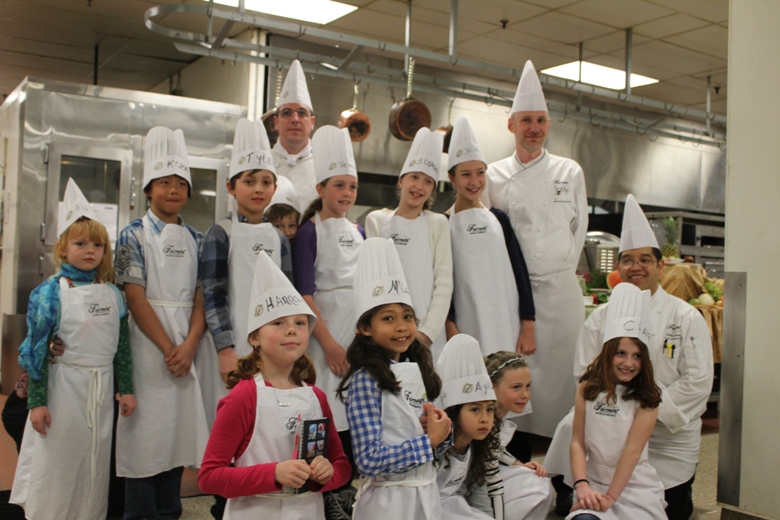 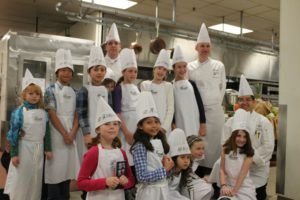 Chef and kids at Fairmont Chateau Laurier in Ottawa, Canada

Some worker bees really have it made.

At the iconic Fairmont San Francisco, located atop Nob Hill, they live in one of San Francisco’s poshest neighborhoods amid fragrant lavender, kumquats and edible flowers. They literally buzz upstairs to the penthouse for a drink.

We’re talking real bees here; bees that refresh themselves at the outdoor penthouse fountain high above the fray. If you’re staying with your kids at the Fairmont — and when I was there recently the hotel was packed with families — show them the beehives in the hotel’s 1,000-square-foot culinary garden, installed by Executive Chef JW Foster to help support the bee population, which has dropped 90 percent since the 1980s. The kids can peer through the glass to see the bees flying around the lavender. (Learn more with the “Chef’s Apprentice” package,)

The honey in their muffins or cookies comes straight from the hives in this urban garden, Chef Foster says, and veggies are grown by local farms. Foster has made a great effort since he arrived at the Fairmont two years ago to improve and upgrade both the kids’ and adults menus with fresher, local ingredients — a Fairmont-wide initiative — that is especially notable at this historic hotel, Fairmont’s first, which was originally set to open on April 18, 1906 — the day of the Great Earthquake. (It opened a year later, heralding the city’s recovery and has been a prominent San Francisco fixture ever since,)

Finally, it appears, the hotel industry is paying attention to what traveling families have long been saying: Make kids’ menus healthier; give kids more choices! Early this summer, Hyatt, too, is set to unveil new children’s menus, according to Susan Terry, vice president of Culinary Operations for Hyatt’s North American Hotels. Hyatt’s initiative will be monitored by the Partnership for a Healthier America, which works with the private sector and honorary chairwoman First Lady Michelle Obama to solve the nation’s childhood obesity crisis. This is all part of Hyatt’s new Food Thoughtfully Sourced, Carefully Served global initiative that stresses local ingredients and healthier cooking.

Hyatt will offer fruits or vegetables as sides for children’s meals and free refills for nonfat or low-fat milk. Kids can also order half portions from the adult menu for half the price, as they can at Fairmont hotels.

At the same time Destination Hotels and Resorts, a collection of hotels from Austin to Aspen to Palm Springs to Maui, has not only created a new healthy Kids Cafe menu, but also launched a contest for kids’ healthy recipes. Their just-announced winner (judged by kids) — Hidden Veggie Pepperoni Mac and Cheese — will be part of the hotels’ menus for the next year. Runners up included grilled Chicken with Mint Ginger Citrus Orzo.

“Kids should have the opportunity to explore local cuisine, just like their parents,” says Mariano Stellner, Fairmont’s corporate director of Food and Beverage, who launched the revamp of the children’s menus this past spring as the latest component in the hotel group’s Lifestyle Cuisine Plus Initiative, which offers healthier, low-fat foods.

“A lot of children are Food Network junkies,” adds Hyatt’s Terry. “They are much more sophisticated eaters than their parents were … they want interesting food.” Parents are telling hoteliers, “They don’t want to fill their kids up day after day with junk!”

First Lady Michelle Obama certainly would applaud these changes. She is at the forefront of a national effort to combat childhood obesity with her Lets Move campaign that encourages healthy eating and physical fitness.

“The whole (healthier foods) program has been very successful,” said Stellner. “Why not include children?” Why not offer baked chicken fingers rather than fried, veggie sticks instead of French fries or a half portion instead of a full order? Why not encourage kids to try local cuisine in Mexico or British Columbia?

Even the kids’ selections in the Fairmont San Francisco’s Tonga Room — popular since 1945 and recently restored (love the big canoe in the middle!) — have been updated to include spring rolls , chicken satay, little chowchow (wok flashed vegetables and noodles) and grilled teriyaki chicken.

Just don’t mention the word healthy. And parents should never assume what kids will or will not eat, says Susan Terry.

Still, every parent of a fussy eater knows it can be very difficult to get kids to embrace new foods. Jan Dane, a Rhode Island mother of three, acknowledges it is sometimes easier to take the path of least resistance and serve them chicken fingers, especially when you are traveling. It’s up to parents, she says, to give kids the nudge they need to try something new.

Dane’s job is to do just that. She’s the resident forager for the Ocean House Hotel in Watch Hill, RI. She teaches culinary classes to kids and adults at the small, upscale beachfront hotel and works closely with local farms. (Read what I wrote about a morning with Dane.) “I loved seeing a little boy eat his first oyster,” she said.

In France recently with her own children, Dane realized that most restaurants didn’t offer children’s menus, just smaller portions for smaller prices. “That makes so much sense,” she said.

To help kids understand where their food comes from — and maybe try something different — she suggests taking them to visit a farm or a farmer’s market wherever you travel — the one at the Ferry Building in San Francisco is one of my favorites.  (Websites like www.farmfreshri.org in Rhode Island, www.localharvest.org and www.farmstayus.com can help.)

Wherever we’re taking kids this summer, let’s make food part of the adventure.

And let’s hope more hotels and restaurants help us.