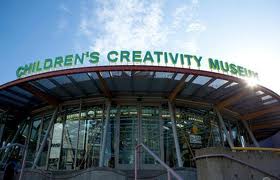 SAN FRANCISCO (DAY THREE OF FOUR) — In one room the kids are busy making creatures out of clay and then seeing them come alive in a Claymation movie they create with a computer program and different backdrops; in another, they’re performing in music videos.

They are working at a LEGO wall and making their faces look silly with Photoshop.

Welcome to the Children’s Creativity Museum  in downtown San Francisco right at Yerba Buena Gardens  that is unlike any children’s museum I’ve ever seen.  For one thing, it appeals to all ages. “I love it here,” said Rena Victoria, 16, who was busy meeting a challenge, creating something only with the ingredients in a Mystery Box in the Innovation Lab.

What would you make from the recycled materials in the box if “your legs turn to glue and you are stuck…and the only shop that sells Glue-Be-Gone is across town?”

What could you build that would hover in the tube at Aerial Antics?

“I like how no one has to tell you what to do,” said Nyxa Aquina-Thomas, 11. “You let your imagination go free and no one tells you don’t touch!”

The Claymation Studio is clearly one of the most popular as kids and adults alike fill the tables, designing creatures, plants and flowers out of multi-hued clay and then turn them into videos that they can take home or email to themselves. “You create something and then they come alive,” said Shira Bachmann, 11, who said the movie she and her friends were making had to do with a cat who was going to eat another creature “and then everyone is going to dance!”

She and her twin brother Ilan chose to come here for their 11th birthdays with their friends specifically because of the Claymation, said their mom Suzanne Chasalow.  “There’s a lot to do with your hands everywhere,” explained Ilan.

Museum-going doesn’t get better than that.

The Children’s Creativity Museum counts about 85,000 guests year-round, many from out of town.