Cleared for takeoff — over the Alaska Range 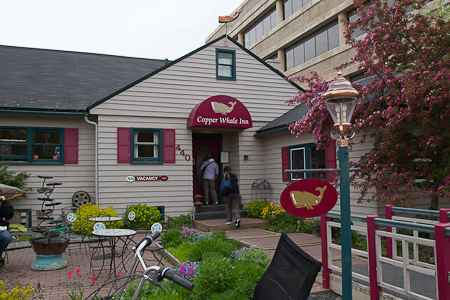 Other mornings, we could see North America’s highest peak, Mt. Denali (20,300 feet) from the window of our cabin at Camp Denali  deep inside Denali National Park.  Today, we couldn’t see much.

Our hopes of flying back to Anchorage around the mountain on Kantishna Air Taxi weren’t looking good.  Not only did we want to view this amazing wilderness –the glaciers and the Alaska Range from the air, but we hoped to save ourselves the 11-plus hours of travel land transportation—bus or train—would take.  The flight was just an hour and a half.

By 7 a.m, when the buses left, we breathed a sigh of relief. The pilots had declared plenty of visibility to fly. Unfortunately, the mountain the Native Alaskans called The Great One was too cloud-shrouded to do a flyby, but there was plenty of visibility to get spectacular views of the snow-covered Alaska Range, the glaciers, the rivers, Wonder Lake and even the places where we’d hiked in this trailess national park.

Kantishna Air Taxi mostly flies visitors around the mountain, said our pilot Andy Young.  “A plane in Alaska is like a car anywhere else,” he explained.  “It is how we get around. There just aren’t any roads in a lot of the state.”

That includes the state capitol Juneau, where we are ending our trip and Ketchikan, where we are flying tomorrow to meet our InnerSea’s Wilderness Discoverer ship to cruise the Inside Passage from the vantage point of a small ship with just 60-plus passengers that anchors in coves rather than port towns.

For now, we are feasting on the sights below us—the massive Muldrow Glacier, 35 miles long, the glacier-fed McKinley River, , old  black glacial moraine that looks to me like the surface of the moon.  There are tiny kettle lakes formed by the glaciers and clear Wonder Lake that we’ve driven by several times during our stay where on a clear day you can see Mt. Denali reflected in the water.

Mt Denali is what brought Young first to Alaska, like many others, he said and he did summit many years ago “though I don’t think I could do it now.”

We fly around the famous Alaska Range… 300 miles long and 50 miles wide, the snowcapped peaks and almost black mountains looking like chocolate sauce dripping down vanilla ice cream.  We fly over the Thoroughfare River where we hiked yesterday. Now we can finally appreciate the vastness of Denali—600 square miles of rugged terrain in this “trail-less” park.

We pass other mountains in the Range, Mt Deborah, Mt Hunter, Mt Huntington that are lower than the 20,300 Denali but rarely climbed, our pilot tells us, because they are more difficult to access and require more technical climbing skills.

We fly around the Weldridge Glacier—about 20 miles long – and the Ohio Glacier.  Glaciers cover one million acres, or one-sixth of Denali National Park, flowing away from the mountains transporting hundreds of thousands of tons of ice each year that eventually melts and fills rivers with muddy water that flows into the oceans. We’d hiked right by some of that muddy water.  Hundreds of unnamed glaciers and at least 40 named glaciers flow from heights as high as 19,000 feet and descend to elevations as low as 800 feet above sea level.

Now we get a better sense of what happens when glaciers calve!

I’m also glad we flew for another reason.  Denali National Park is not easy to get to—especially at the end of the 90-mile park road where we were staying at Camp Denali with its incomparable views of Mt. Denali.  It took us roughly five hours to drive the 260-miles to the park entrance in a bus from Anchorage and seven-plus hours yo make our way through the park, stopping to see the wildlife (two bear cubs; Dall sheep grazing by the side of the road!), as well as for a picnic dinner.

Coming into Anchorage a mere hour and 25 minutes after we’d left, we see the Cook Inlet and the city where nearly half of all Alaskans live.

Before we‘d left Camp Denali, Simon Hamm, the second generation to run the place thanked us all for coming as the camp celebrated its 60th anniversary.  “The natives would say ‘We’ve been doing business here for 10,000 years,’” he joked. “Sixty years might not seem like much, especially back East,” he said.  “But you can’t sit down and have breakfast with the Pilgrims like you did here with Alaska’s pioneers today.”

I’m thinking about that as I’m back in Anchorage at the comfortable Copper Whale Inn doing laundry and enjoying the indoor plumbing that we take for granted.  There is indeed something special and unique about the Alaskan pioneer spirit that we’ve felt from those who founded and now run Camp Denali to the naturalists who delight in showing visitors to the park to pilots like Andy Young who flew us back to civilization.

On to more adventures in South East Alaska tomorrow.