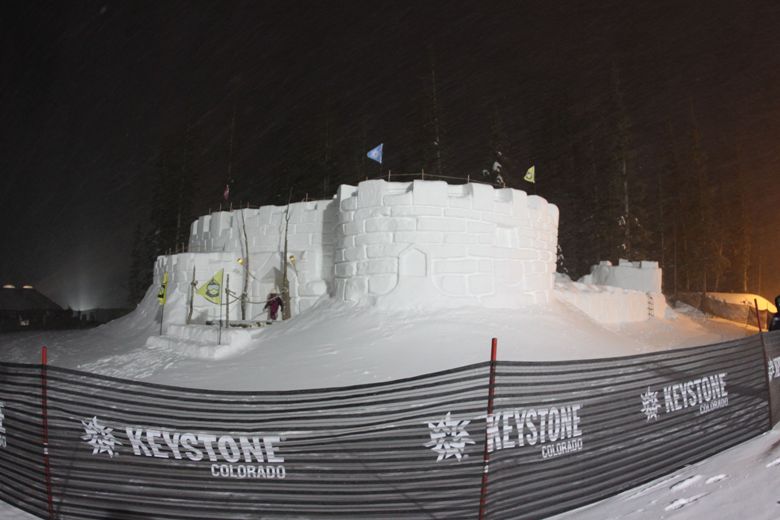 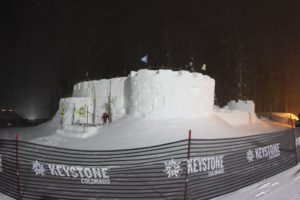 Castle at Kidtopia in Keystone CO

Ever been to an ice castle?

Think huge castle literally out of ice, down to an ice throne and ice slide.

Parents love it as much as kids do at Vail’s Keystone Resort, the most economical and kid- centric of their resorts.

A ski trip can work whether you are five, 19 or 60-at least for our family, at least at Keystone Resort in Colorado.

Even more so this year. This winter season, the Keystone’s Kids Ski Free Program  means All children 12 years of age and under ski and snowboard free every day (no cap on number of children per family).  No blackout dates, available on all weekends and holidays. All you have to do is book two nights in a lodging property owned and operated by Keystone Resort, including over 900 condos in over 30 complexes. Here’s how to book.

Every snow-loving parent knows that trips to the slopes not only are expensive but a lot of work for moms and dads. All the schlepping of gear!  That’s why I applaud any effort that makes snow sports more affordable and more fun for families.

Other resorts have kids’ free programs, notably Brighton Resort in Utah and Steamboat in Colorado.  Kids ski and stay free certain times during the season at AspenSnowmass.  (Check www.ski.com for the best flight and lodging deals.)

But Keystone is promising there won’t be any blackout dates over the holidays nor are their limits for the number of kids who get free lift tickets in your gang, as long as you book lodging for two nights.

And there really is something for everyone here—whether you are experts or nonskiers, whether you are 65 or five. One morning when we last visited Keystone, my husband Andy, son Matt and daughter Mel, celebrating her 19th birthday, headed off for a day of CAT Skiing off piste.  They spent the entire day skiing waist-deep virgin powder (“Colorado Champagne Powder” it’s called).  Mel pronounced it her best birthday present “ever.”

Five -year old Hannah SItzman—who already is skiing better than most kids her age–headed off for a day skiing intermediate slopes with a ski school instructor who pronounced is “the best day I’ve had in a month” because the kids were enthusiastic and happy—not a whiner in the group.

Hannah’s older brother Ethan took his first-ever snowboard lesson while the non-skiers went off snowshoeing at the Nordic center.   The other three teens in the group sought out Keystone’s steepest terrain.

I spent the day taking a lesson with one of the coaches who leads the women’s clinics held during the ski season. “The biggest thing is women conquering their fears together, cheering each other on.  That doesn’t happen in coed classes,” the coach offered.

Moms, she tells me, should take time for themselves and invest in some instruction. “It is worth the time and the money. You will enjoy your kids’ experience so much more and you’ll be able to enjoy your kids’ successes more.”

I think she’s right. At the end of the ski day, the five year old and seven year old still had some energy left so we headed back up the gondola so Ethan could show us what he learned in snowboard class.

But first, we had to stop at the truly awesome Snow Castle . Because there is night skiing here till 8 p.m., the gondola and lifts are still running. Kids of all sizes are slipping and sliding through the tunnels and slides in the fort, posing for pictures on the ice throne. And it doesn’t cost a cent. Kids are smiling. So are parents. We had to pull our little snow bunnies away for dinner.

We were 18 for dinner in our condo for chili, rice and cornbread (Andy brought the chili out in frozen packages from Connecticut).

The college kids played with the little ones.  Everyone was happily talking about  their  adventures on the slopes.

I sipped my wine and looked around.  This is why we bring the gang to the slopes.

Thanks, Keystone for making it more affordable.