Combatting calories at sea and a stop in the Bahamas 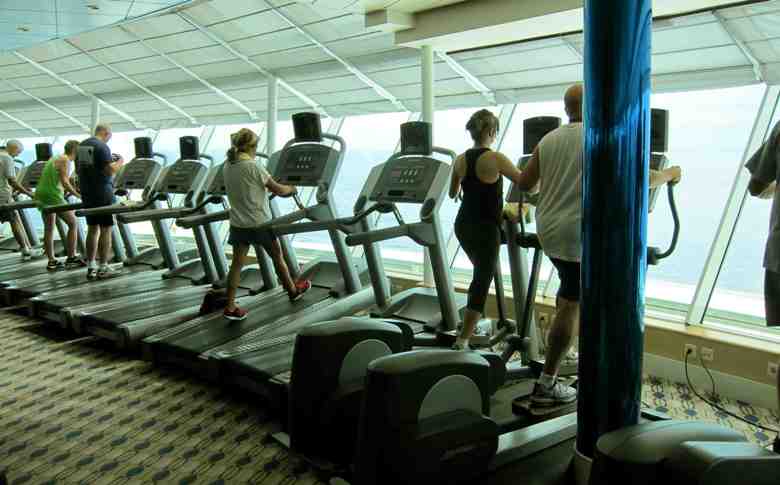 The gym aboard Royal Caribbean Freedom of the Seas

DAY TWO ABOARD ROYAL CARRIBEAN FREEDOM OF THE SEAS — Our first port of call to CocoCay, Royal Caribbean’s private Bahamian island, was cancelled due to poor weather conditions.  This gave us more time to get into the rhythm of shipboard life.  Our aim was to try as many activities as possible and the stormy weather and rough seas did not deter us.

I knew that gaining weight was common on cruises, with the limitless, round-the-clock food options, so I quickly headed to the fitness center.  This state-of-the art facility blew the socks off my gym in New York City. It is located in the bow of the ship and thanks to floor-to-ceiling windows, offers jaw-dropping views of the open seas.  There are treadmills, elliptical trainers, resistance machines, free weights, even a boxing ring.  With so many machines, there was never a wait.  Exercise classes are scheduled throughout the day, including an early morning stretch class, yoga, Pilates and spinning.

Royal Caribbean takes family fitness seriously.  They recently hired former NFL player Dhani Jones as their Celebrity Sports and Fitness Expert.  He is lending his athletic expertise to take shipboard options to the next level, with a special eye on developing new ways for families to stay fit together while at sea.  Innovative plans are in the works for SeaPlex, a giant indoor space that will feature bumper cars, basketball courts, roller-skating and more.  Dhani was traveling on board during our cruise, so we had the opportunity to participate in a special exercise class that he led.

Alec and I challenged each other to a friendly round of miniature golf.  It was difficult to keep the ball in play with the wind blowing hard, but we managed.  We headed indoors to try our luck at ice-skating.  They provide skates and the required helmets.  It was tough to keep from falling and not just because we aren’t great skaters.  The rocking motion of the boat made it nearly impossible to stand on the thin blades and we clung to the rail as we circled the rink.

As an avid theatergoer, I looked forward to the nightly live show held in the spacious Arcadia Theatre.  The level of the talent was high and my thespian son was equally pleased with the offerings. We watched a magic show, a peppy Broadway revue and my favorite, the Finkel Brothers.   These two Brooklyn-born musicians wowed the audience with an inspired piano and Xylophone concert that featured a medley of Gershwin classics and ragtime hits.  Alec was awed by their rendition of “Rhapsody in Blue” and they received a well-deserved standing ovation.

Royal Caribbean is one of the largest employers of professional ice skaters and the ice skating show is truly spectacular.  The skaters were clearly well trained and talented, but performing jumps, spins and lifts on the high seas seemed nothing short of miraculous, especially as we could barely make it around the ice without falling a score of times.  Don’t miss this gravity-defying show when you are cruising.