Communing with penguins in Patagonia and California 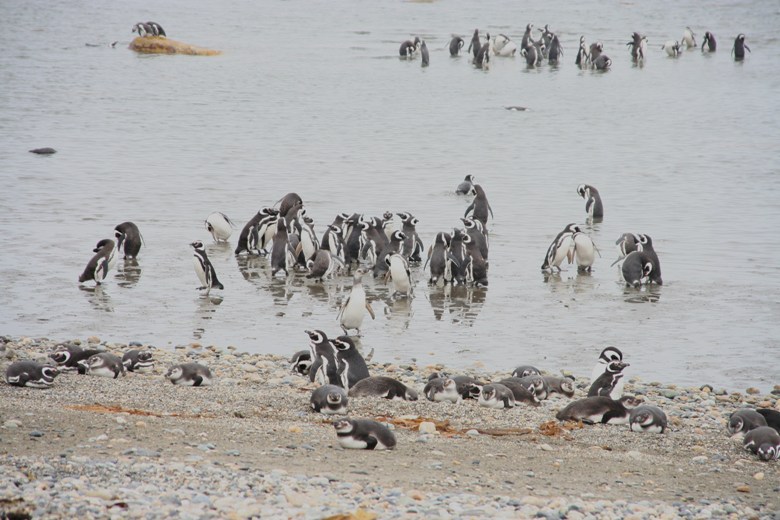 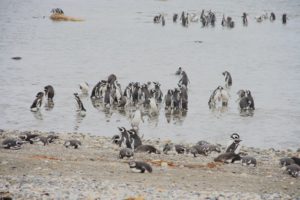 It may be chilly and drizzly but the Penguin families are out for a day at the beach—literally.

It’s New Year’s Eve in 2009. We’re in Patagonia, Chile (www.visit-chile.org), at the bottom of the hemisphere (a four-hour flight from Santiago) and a destination that is becoming more popular with Americans searching for their next great adventure (and those who might have college kids studying here, we discovered.)

We overnighted at Puenta Arenas which means “Sandy Point” and was Chile’s first permanent settlement in Patagonia but don’t see much of the city because the next morning, we immediately head to Turis-Otway, about an hour northwest to see the penguins.

Many here take a boat to Isla Magdalena to see some of the 120,000 penguins who live at the Monomento Natural Los Pinguinos which, according to Fodor’s is one of the continent’s largest penguin sanctuaries, open only from December to February when the Magellanic penguins come here to nest and nurture their babies along the southern Chilean Coast.

By the way, if you can’t get to Patagonia, head to the Monterey Bay Aquarium (www.montereybayaquarium.org) in California where you can meet and greet Magellanic Penguins who were rescued  and brought here. Climate change is forcing these creatures to swim farther to find food so they must swim an extra 25 miles or so from their nest for fish. So sad! Though millions of these Penguins still live on the coasts of Chile and Argentina, they are classified as “Near Threatened” due to their vulnerability to oil spills, as well as predators which prey on the chicks.

In 2008, several hundred starving penguins washed ashore in Brazil when their search for food took them into a strong current that swept them hundreds of miles from home. Many ultimately were nursed back to health and returned to the wild. Some who couldn’t go home were brought here and other aquariums and now help us all understand the impact Climate Change is having on the ocean and sea birds.

Seeing them recently in Monterey brought back memories of our foray to Turis-Otway in the rain—and how visits to new places aren’t always what you expect.  I learned that misty, cold day how important it is to simply go with the flow.

“Remember how disappointed you were at first when we only saw one penguin?” my daughter Reggie reminded me at the Monterey Bay Aquarium as we stood in the exhibit.

It’s true I was bummed when we first arrived and was kicking myself for not planning better so we would have had time for the two hour boat trip Isla Magdalena instead of coming here. I was even more frustrated when our guide Felipe Plasa told us had we come in the evening, we’d  have seen many more of the picturesque creatures.  Why hadn’t I known that? Why hadn’t I arranged our schedule accordingly? The kids and my husband just told me to stop second-guessing myself and relax. We all should do that when excursions don’t turn out exactly as planned (most of the time, especially when kids are along, I’ve discovered.)

And really, I just needed to have a little patience. This reserve stretches over a mile of coastline and is said to be home to over 4,000 Penguins, most of who are out fishing when we arrive but we encounter plenty of others who studiously ignore us, like the cool kids at school, busy with their own cliques.

Some cross under the wooden walkway to get from the Coast to their burrows in the sand—kind of a condo complex for Penguins, we decide. It is an amazing sight that makes us all laugh and smile at their antics.  The babies, just a few weeks old when we visited are little gray balls of fur. They don’t have the distinctive white and black coats yet but will in only a couple of months.

These penguins–just 24 to 30 inches tall and no more than 14 or so pounds.  They come here to nest and nurture their young.  There is a wooden walkway for a mile or so around the reserve. The penguins waddle by singly and in pairs, as if out for a morning stroll.

They gather in the shallow water where the chicks are learning to swim. It reminds me of a scene I’ve been part of many times when my kids were young at community pools—parents gabbing while keeping an eye on the little ones who are splashing nearby. What does their braying mean? We wonder.

These penguins are very 21st Century families too. The Chicks—born after incubation that lasts no longer than 42 days—are taken care of in shifts by both working parents who alternate going out to fish to feed the babies, coming back with sardines, squid, cuttlefish and more. Eagles and other sea birds fly overhead.

These penguins, Felipe Plasa told  us, mate for life and return to the same partner year after year as well as to the same nest – “It’s the Penguin’s Hamptons,” jokes my daughter’s boyfriend Dan Foldes. Indeed, this is their summer home where they remain till March and some burrows are so close together that it seems more Miami beach (I’m assuming the grandmas are here someplace bragging about their children’s fish-catching prowess) than the Hamptons.

They will return to breed in the fall, we learn, and  the male  will reclaim his burrow, waiting to  reconnect with his mate. She, in turn, will recognize him through his call alone. Cool!

All my frustration and second-guessing disappears at the scene before us. We’re so privileged to be here, watching these oh-so-cute creatures in their natural habitat—tending their families, yakking with their neighbors, relaxing at the edge of the coast.

Just like us and our kids at the beach—except of course we don’t have to swim 25 miles or more to get the kids lunch.