Cooking with a local master over an open hearth 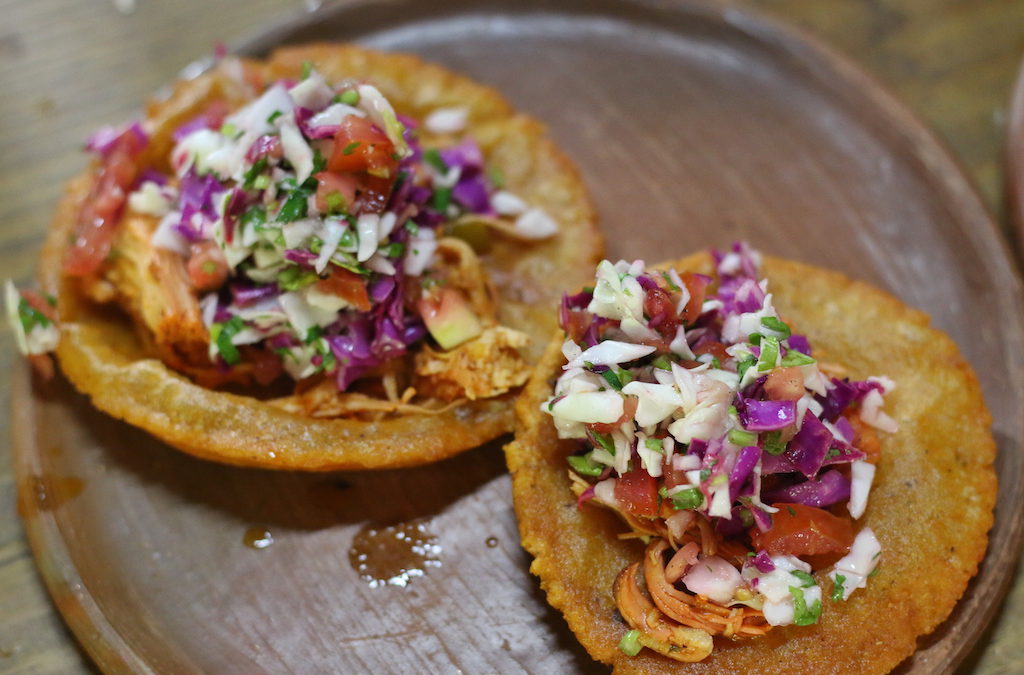 We’ve signed on for an Open Hearth cooking lesson at The Lodge at Chaa Creek and there’s a lot of chopping to do, says our teacher and chef Marco Yuk.

Marco has been cooking here for years and is working to become a master chef. He will be cooking at the Masters Golf Tournament in Georgia in April.

We chop cabbages, tomato, onions, potato, pepper and more. These are for the Mestizo dishes we will prepare. Chirmole is a kind of soup with chicken, vegetables, boiled eggs and black recado spice that give’s the dish it’s distinctive black color. There are corn tortillas to make as well for Salubutes, shredded chicken with spices and tomatoes served with cabbage slaw.

We are in a thatched-roof kitchen that has both wood fires (one for the tortillas) as well as a stove. Mestizo, we learn, comes from the Spanish word for “mixed,” those who share Spanish and Maya ancestry and now number half the Belizean population, including Chef Marco.

They began to immigrate from Mexico in the mid 1800s, first working as sugar cane farmers, loggers and chicleros who tapped the sap of sapodilla trees in the jungles for export to chewing gum companies. Are you familiar with “Chicklets” gum?

The Mestizo dishes we are cooking use Spanish spices along with indigenous Maya ingredients including corn and chilies, served with freshly made corn tortillas.

The Creole people, who now represent about a quarter of Belize’s population, grew from unions between European settlers who controlled the logging trade and African slaves who worked for them in the 1700s. Rice and beans are always a staple.

The Maya, of course, were one of the ancient world’s most advanced civilizations with Belize a Maya Heartland. At the heart of this cuisine is produce, corn and game as well as meats including turkey.

Only two percent of Belize’s population are East Indian. They were first brought to Belize in the 1800s to work on sugar plantations. Today, they are prosperous businesspeople and their spicy cooking continues to be very popular.

Today’s Belizean cuisine has been influenced by all of these cultures, explains Glenda Villeda, the food and beverage director at the Naia Resort & Spa outside Placencia. She was raised near The Lodge at Chaa Creek in San Ignacio.

“Every grandma has a garden with basil, cilantro, habaneros, she said. “Back in the day, every family grew their own food and usually had pigs, goats, chicken.  They ate whatever they grew.”

She showed me the vegetable and herb garden that currently is being expanded with Cilantro, Okra, Callaloo, habaneros, lemon grass and more. The Lodge at Chaa Creek, meanwhile, is known for its large 33-acre Maya Organic Farm that supplies most of the vegetables and much of the fruit and herbs for the hotel. There are also chickens, sheep, goats, and cattle.

Owner Lucy Fleming hopes to establish a petting zoo at the farm for visiting children. “A lot of kids don’t even know where eggs or bananas come from,” she explains. She adds that guests-including their kids—love the Open Hearth cooking lessons ($49) which are followed by lunch of what we cook.

Visitors are seeking local food these days and there are Belizean dishes on every menu whether pineapple, papaya, and bananas for breakfast along with cappuccino and French Toast, Ceviche or Belizean Fish Chowder for lunch along with pizza and burgers, traditional chicken kack-ick spicy Mayan soup as part of the four-course dinner menu that also features freshly made pasta, lamb or steak and house-made desserts. {Red velvet cake anyone?)

The aim at Naia Resort is to serve Belizean Dishes with fresh ingredients–the chickens come from inland Mennonite farms, said, Villada. The fish are caught locally.

You can get an omelet or smoothie for breakfast, but you can also try Fry Jacks, similar to donuts, or a Johnny Cake Breakfast Sandwich, a popular local bread, or a Mayan breakfast with sauteed callaloo (similar to spinach) and eggs

Locals might have a fried fish sandwich on Johnny Cake with cheese. Meat Pies, dough with a ground meat mixture, are common for breakfast or anytime.

If you are staying in one of the larger Naia Resort units with a full kitchen, Villeda said, she could teach you how to prepare some local dishes like stew chicken, a popular Sunday dinner (lunchtime) meal accompanied by white rice, beans potato salad and fried plantains. “And you have to have the habanero onion sauce, Villeda said.

Desserts would include a Potato Pond, a kind of sweet potato grated with butter, brown sugar and then baked or coconut tarts.

Buy fish from the local fisherman in Placencia or bring back your own catch and the resort chefs can help you prepare it the way locals do.

As for us, the lunch we helped prepare was delicious, served at a table under the Open Hearth Thatched Roof. We left with the recipes and some of the needed spices.  But somehow, I don’t think the dishes will taste the same at home.