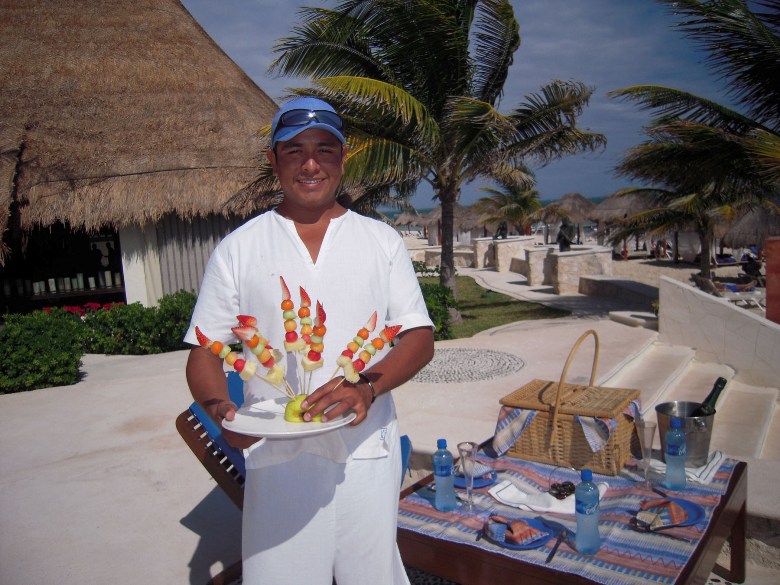 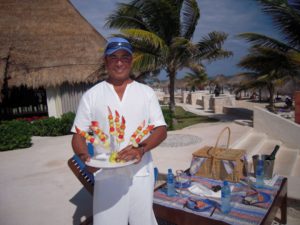 A beach butler at the Azul Sensatori

I walk down the beach. A toddler is snoozing in the spacious covered “beach bed;” a grandfather is playing cards with his granddaughter; a dad is tossing a football along the beach with his sons. There is a beach volleyball game going on at one end of the beach and a kids’ soccer game at the other. A group of adults are playing bocce ball on the beach. A mom is going out in a kayak with her daughter.

“I love the cabanas,” says Casey Morash, who is here with her year-old daughter and husband for her brother in law’s wedding. “Otherwise you are stuck in the room all afternoon while she is napping.” Beach butlers are hustling with tall frozen drinks (non-alcoholic for the kids). We’re at the all-inclusive Karisma Azul Sensatori  about a half hour south of Cancun International Airport so parents are more inclined to indulge the kids. “All-inclusives are the only way to go with teen-aged boys,” agrees Gayle Vass, who is traveling with her 17 year old son, her husband and her son’s friend.

“We can get whatever we want and try things,” said Jen Pfeifle, a senior at the University of Michigan traveling with her parents and two sisters.

“I like that there is food all the time,” said her sister Kate.

But all is not perfect in paradise. This resort opened just a month ago and there have been problems for some of the guests — a shower door falling off, wet paint, locks that don’t work, ineffective staff. “The food is great. The service not so great,” acknowledges Jean Pfeifle. The brand new concierges can’t seem to answer many of the guests’ questions.

Others have more serious problems — rooms promised together because kids from two families were sharing a room. Instead, two rooms are in one building and another in a separate building. A suite promised but instead, the family is told one isn’t available.

It’s very frustrating when a long scheduled vacation doesn’t go as planned when it’s not your fault and especially with the economy the way it is. “We thought about not coming,” acknowledged one dad from Canada.
“We booked before the (Canadian) dollar fell,” said Lisa Degelman, who explained she didn’t consider canceling — not when it was so cold in Saskatchewan.

Perhaps it’s the language problem, I think. “They just weren’t ready to open yet,” said Julie Dawson, a travel agent from Springfield, Mo. traveling with 16 members of her family. There are more pluses than minuses, though. “A fabulous kids club,” Dawson said, that appealed to the four year-old in their gang who typically won’t leave mom and dad.

On the other hand, teens told me the well-appointed teen club seemed “dead,” with no one there. The fitness center is very small, my husband reports, with people waiting in line and getting irritated, he reported.
The place also needs more water sports, my gang decides. All they have are kayaks and boogie boards. They go next door to rent a sailboat. (We learn that more water sports will be coming.)

But we’re having a great time and that’s what counts, I decide. We play cards on the beach. We tell old family stories over tacos at the Mexican restaurant Zocalo at lunch and drinks at the Mojitos Lounge before dinner. We enjoyed an Italian feast at Sienna, under a painting of the town square which we ‘d visited last year. “It’s Mexico,” one mom tells me. “You’ve got to expect the glitches here.” You can’t let little things spoil your fun either
This resort has a lot of potential — I hope it doesn’t take them too long to realize it.