Dancing with Dolphins, kissing Sea Lions in the Bahamas 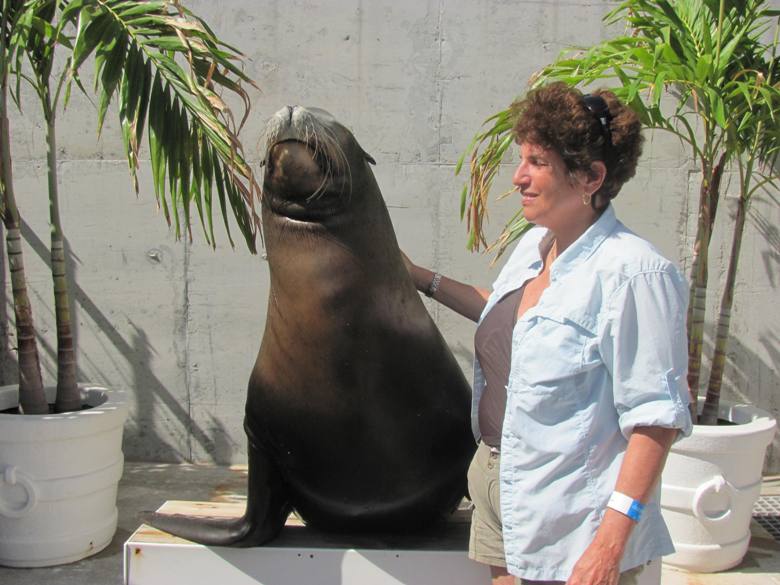 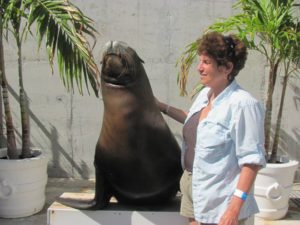 Eileen and Moxy the Sea Lion

DAY SEVEN – I’m dancing with a 14 year old and he seems to like my moves.

Of course it helps that the 14 year old is a 492 pound eight foot long dolphin named Icaro.

I’m at Dolphin Cay at Atlantis in the Bahamas where 36 dolphins (8 rescued after Hurricane Katrina), enable visitors to participate in one of the largest dolphin interactive programs in the world. Typically 800-900 guests participate a day, says Teri Corbett, vice president of Marine mammal operations, which also include sea lions and the five baby dolphins just born in the past month.

The facility is extensive—a 14 acre lagoon where the dolphins live in seven interconnected pools containing nearly 7 million gallons of sea water. A staff of more than 80 including an on-site Vet cares for them. There is a state of the art lab where the team has even performed surgery—even removing cataracts from a 24-year-old sea lion. Part of the proceeds of the programs go to support the Kerzner Marine Foundation that fosters the preservations of global marine ecosystems around the world, Corbett said.

Six year old Jack Bateson was beside himself with excitement when he petted Icaru and watched him strut his stuff—leaping and jumping, walking backward on his tail. “The best part was when I made him jump,” he declared afterward.

“He wants to come back every month,” joked his dad Josh, explaining the family is visiting from Canada. “What’s not to like here, this is wonderful!”

“I didn’t know how smart dolphins were,” added 10 year old Sasha Martin, here from North Carolina with her family. Corbett said there are now 36 dolphins and 17 sea lions and noted “we’re always expanding the programs.” These animals are carefully monitored to make sure they remain healthy—and happy. They alternate so they aren’t doing too many interactions a day, though they certainly seem to enjoy it. “The job of the trainers is to make sure the interactions are fun for the dolphins and enriching for them,” explained Corbett.  The training starts soon after they are born—in fact, we watch a group of trainers working with two of the month-old calves, teaching them to go from one pool into another.

The facility serves as the best marine mammal rescue and rehabilitation center in the Bahamas—the sea lions here were also rescued. Corbett shows us the lab which she proudly says is one of the most medically advanced in the Bahamas — for creatures or people, she jokes — complete with ultra sounds equipment, digital x-rays, anesthesia machines and more. Experts here have the ability via the internet to consult with experts around the world.

She notes that the Sea Lion program is the largest sea lion interaction program anywhere. We watch as sea lions “dance” to the delight of the visitors. (In case you are wondering, sea lions can walk on their flippers but seals can’t).

We see the maternity pool where a couple of the new mom dolphins and their babies are swimming around and playing. Imagine, Corbett tells us, calves must learn to simultaneously swim and breathe air within a few minutes of being born or they won’t survive. The mortality rate can be as high as 50 per cent; here all five of the new calves are flourishing.

It’s easy to see why visitors love this place. It is also a popular destination for ill children from the Make a Wish Foundation. In the water, we pet Icuro as he swims past us. We each give her a hug and kiss (and have the pictures to prove it!)

We follow our trainer Rudena Miller’s direction (raising our arm a certain way, for example) and watch Icuru get up on his tail and skirt backward. We feed him fish.  It is all about positive reinforcement, the trainers explain.

But if little Jack Bateson has his way, it won’t be just once.