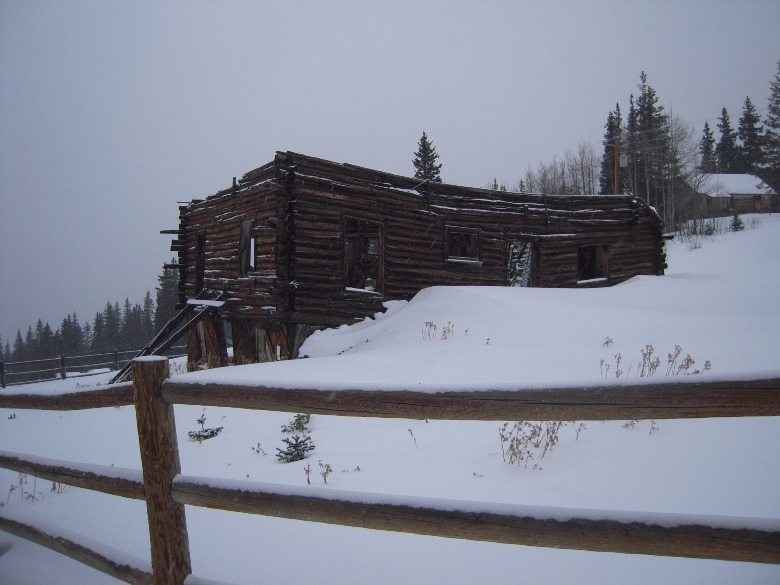 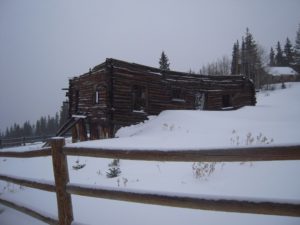 DAY FOUR — I’m standing in a ghost town—in the snow in the middle of the forest.

Who says all there is to do on a winter trip to a ski resort is ski or snowboard?

I’ve just snow-mobiled through winding trails around curves up and down thanks to Telluride Snowmobile Adventures (www.telluridesnowmobile.net).  Tracy and Chris Becraft and their two daughters, in fact, have spent the last several days in Telluride having fun in the snow without setting foot on the ski mountain. They’ve dog-sledded and ice skated, sledded in the town park and now, are snowmobiling.  “It’s been a great trip,” Tracy Becraft says, explaining her gang, who lives outside Scottsdale, AZ,  didn’t need a ski hill to have fun in the snow.  “Telluride is such a quaint spot,” she says. ”People have been so nice and accommodating to the kids.” Her daughters are seven and 10 and especially liked sledding, they told me. Their hotel even provided plastic saucers for them to use. “It’s quiet.”

Historic too.  So here we are about 10 miles outside of town in the San Juan National Forest in what was once the mining town of Alta, at 10,600 feet.  At one time, our guide John “Wheats” Wheaton tells us, there were more than 50 buildings here—even a school, houses, a bath house, cook house and boarding house, store…and a town where 350 people lived from the 1870s. The town existed as late as 1949.

Today there are just seven collapsing buildings left. The boarding house seems in the best shape where six men shared tiny cubicles.  He tells us the miners would walk the 10 miles into town on payday and get so drunk that they’d be put on a mule for the ride back home because the mules knew the way—that’s why the road is called Boomerang Road. We make a 16-mile loop. The views would be spectacular in spots, I know, if it weren’t snowing.

But the snow makes it more magical and operating the machine is easier than I thought, though I still think itwould be more fun to come out here on snowshoes or cross country skis and soak up the silence.

Back at the Ski Resort, the children’s ski school is in full swing during one of its busiest weeks of the year says Noah Sheedy, who manages the children’s programs here (www.tellurideskiresort.com). But even during the busiest week of the year, he’s only got about 225 children enrolled between ages three and 14—perhaps a quarter of the size of other family friendly resorts like Snowmass. “Telluride is the most convenient place to ski with a family in the country,” says Justin Chandler, a father of two and executive director of the Telluride Ski and Snowboard Club. He has shepherded some of the 275 kids in the club to events around the country.

Parents like the intimacy and that the vast majority of instructors are veterans here who know their kids. It seems an easy ski school to navigate—right next to the town gondola in the middle of the mountain village. The kids’ get their rentals right in the building—in fact the instructors take care of that too. And no worries if parents are a little late getting down the mountain. There is complimentary after-care till four p.m. Next door is a nursery that takes kids as young as two months.

Maybe it is a function of the economy but the nursery isn’t full. “Other years we’d be turning people away this week,” says manager Brandy Kashiwa-Potterton.

Sheedy says parents are opting for fewer days in ski school too. It’s expensive–$125 a day for a toddler or infant day care; $175 a day for ski school including gear, lunch and lifts, though there are discounts for multi days. “We can set up anything the family wants to do,” Sheedy explains, including private instructors—at $625 for the day–for the family.

Yes, skiing is an expensive sport but worth the investment.  Just ask some local parents whose kids are ski racers.  “Kids learn persistence, dedication and hard work,” Chandler explains. “They are in a public place and learn to be respectful of others on lift lines, on the mountains.”

Most important, the kids are outdoors rather than in front of a TV or computer, says Pam Bennett who is raising three fifth-generation Telluride residents—fifth generation on both her and her husband’s side. All three have been ski racers.  “The kids learn to be independent at a young age,” she says.

Even better for families coming from urban environments, she says, is the freedom the kids can have in a town like Telluride—both on the mountain and safely hopping the free gondola from the mountain village  for the 12 minute ride into town where they can go to a movie (there’s one movie theater), get some pizza or a burger at the Sweet Life, or shop if they are tweens and teens.  “Parents just have to be willing to give them the freedom and you will see them blossom,” promises  Bennett.

Bennett and her friend Jane Miller, also the mom of racers who has lived here for 20 years, note that they think the community has become more welcoming to visitors in recent years too. People now realize, they explain, that “we absolutely need the tourists.” If not for them, Bennett continues, I wouldn’t be able to live here and raise my family here. It is an opportunity for us!”

The one thing you don’t want to do is push the kids too hard, adds Chandler, who oversees the Telluride Ski and Snowboard Club. “Be really patient,” he says. “You can’t teach them anything if they are spending all their time worried about how to get down the slope.”

“The last thing you want to hear is that they don’t want to go to the mountain tomorrow!”

That was never an issue with my gang. In fact, I can’t even get them off the mountain for a few hours to go snowmobiling with me. They’d rather ski.

We end our day with a stellar dinner at Allred’s in front of a fire  at the top of the Gondola. It is a feast starting with grown-up grilled cheese (Colorado camembert, pesto and marinated tomato) steaks with our choice of sauces (bordelaise, sage brown butter or leek and goat cheese fondue), truffle parmesan fries, creamy spinach… yum!  We finish with brownie and carmel ice-cream, and pumpkin cranberry cheese cake and practically roll back to the Gondola. Yes, there are a lot of families with kids and there is a kids menu.  I also like that you can order smaller portions from the adult menu.

Good thing we’re skiing tomorrow. We need the exercise after this dinner!