Day One in Antarctica – kids try a spin in the Zodiacs 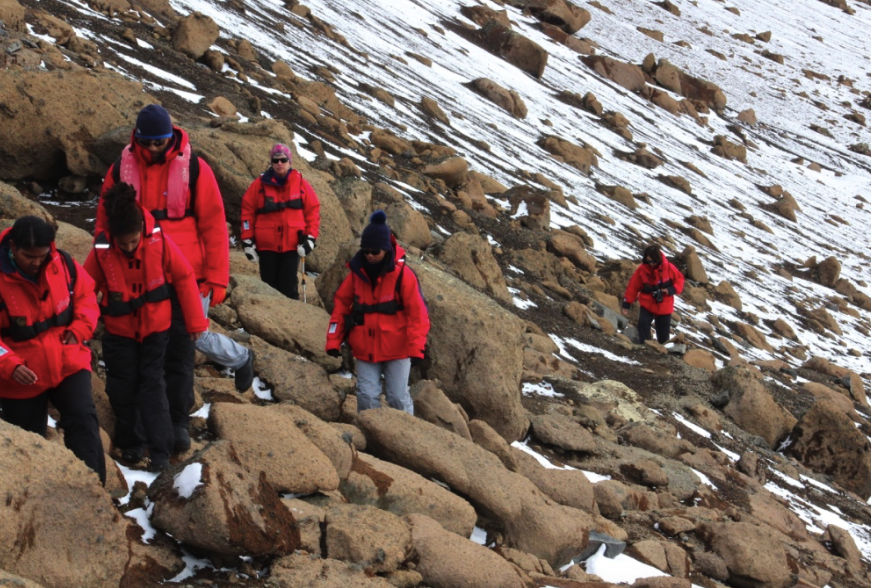 ABOARD LE BOREAL IN ANTARCTICA (DAY 9) — Are we on Mars?

We’re ashore with Abercrombie & Kent on the rocky, crescent shaped Half Moon Island which was known to sealers as early as 1821. The stars of the show are the Chinstrap Penguins, known for the distinctive black “chin strap” and their chicks who peek out under their parent’s legs. We’re rewarded with a penguin maternity hospital of sorts after we climb up a rocky slope, down to the beach and back up again. The penguins and their chicks are sitting on nests they’ve created out of rocks.

“Climbing on the rocks was fun,” said Ciara, 13, from Truckee CA. So was watching the penguins run and hop “straight down the rocks and then back up again and seeing them protecting their chicks on the stone nests and screaming and yelling a lot.”

That’s called “Ecstatic Display,” as the penguins lift up their heads, flap their wings and squawk to greet their mates. As one adult must remain on the egg and then the newborn chick, they likely are ecstatic for some relief, we think.

It is also a pretty stinky scene, the kids’ report, with so much penguin guano.

We’re also greeted with the site of a lone Weddell seal lounging on the beach. “We all got quiet and just listened to him breathe and snore,” said Kyndall. Weddell seals live further south than any other mammal (except people), Lonely Planet Antarctica reports. Their eyes, the kids think, look like a dog’s while their whiskers resemble those of a cat.

Cool – but not as cool as getting to drive the zodiac. That’s right. After we spend some time at Whalers Bay on Deception Island—so named because many originally missed the narrow entrance into the flooded caldera of the ancient volcano. We get a birds-eye view of the caldera from an elevated point called Neptune’s Window (check out all the black sand that is actually hot under the surface!) — the kids get a lesson in zodiac driving — and a chance to drive themselves.

Paul Hart, an experienced Antarctic explorer himself, holds on to the throttle. Power Up!

And he instructs the kids—all teens in our zodiac—to go forward left, and right. “So cool!” says Sky, 15, from Michigan. They are all astounded to learn that the boat Ernest Shackleton piloted 800 miles from Elephant Island to South Georgia was only slightly larger than the zodiac—and without a motor.

“A lot cooler than a moped,” says Ryley, 14. “Of course it’s more fun than driving a car,” agrees Sky, 15, who has her learner’s permit. “This whole day has been really fun,” she said.

And it’s not over yet, as the kids make plans for their evening aboard Le Boreal.