DAY TWO — AT SEA ON THE NORWEGIAN GEM 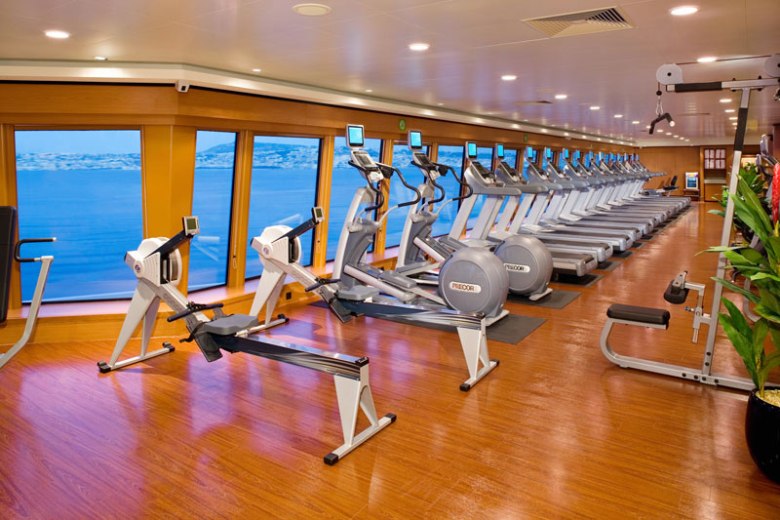 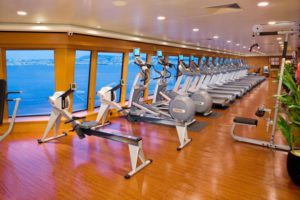 DAY TWO (March 1, 2009) — Norwegian Cruise Lines must be doing something right. Despite the bad economy, this ship is full — 2873 passengers with 500 children under 18 on board.

There are 1108 crew members to take care of us, says Prem Kainikkara, the hotel director who oversees them all. They are from more than 50 countries and many speak three languages.

My room steward Michael Alom is from the Philippines. He’s got three kids, he tells me, but he only sees them every nine months or so. “The pay is better on board than in my country,” he explains. I’m also surprised that there are 25 children under two years old on board — too little for the kids’ programs. “She’s a good baby,” said Kristen Kalafala, who also has a three year-old. And like others I’ve met, she’s got grandma and grandpa along to help.

We’re at sea today and by 9 a.m. the ship is humming with activity — almost every treadmill, cycle and elliptical trainer in the expansive fitness center is taken. Men and women are relaxing in the Thermal Suite at the spa with its special thalassotherapy pool, heated chaise lounges and tropical showers as well as sauna and steam.

The kids don’t seem to mind the weather. It may be chilly, but they are waiting in line – shivering — for the water slides and splashing in the hot tubs.

Certainly no one will get bored. While preschoolers get tips on building Lego creations, grade schoolers play games with the always energetic counselors in the Tree Tops Kids’ Club and teens have a Rock Wall Challenge.

I peek into the Kids Crew. About 50 grade schoolers are playing a game while next door, 30 or so preschoolers are listening to a story. The teens in the teen lounge include members of a soccer team from Montreal, all here with their families. “The fun part is you don’t have to be with your parents. You can go wherever you want and eat what you want,” says 13 year old Katia Mambro.

That freedom is important for the tweens too. With parents’ permission, they can be leave the kids’ club on their own once they are ten and can have the run of the ship — freedom they may not even have in their own neighborhoods.

And because programming runs all day and evening, parents can grab the kids and feed them lunch and dinner and then return them to the counselors (there are 15 on board) and relax over a dinner in one of the many restaurants on board (Asian or Tapas?) knowing the kids are having as much fun as they are. “It’s such an easy vacation,” says Chantal Hirsch, cruising with her husband and three kids from Montreal and a group of five families. “You aren’t paying for food the kids aren’t eating and I’m not cooking!”

As for the adults, the fact that it’s a gray, chilly day doesn’t matter. I can go to a sushi making demonstration and then an Italian wine tasting. There are Scrabble and Backgammon games going on in the library (where I’ve already borrowed two books), and adult WiFi class and even a seminar on an introduction to acupuncture.

There’s just one drawback. The seas are rough and like a lot of people, I feel a little seasick. I take some medicine and a friend gives me special lollis designed to help with nausea… that and a nap seem to do the trick. I’m fine by the martini tasting (I like the French Kiss one the best and don’t even know what’s in it!).

There is another plus. I discover for families who are still willing to vacation — the deal. They are getting far better deals than they would have a year ago. The Hirsches, in fact, tell me they spent a night in New York before the cruise sailed-their kids first visit. “We wanted to go two years ago but the hotels were too expensive,” she said. “The kids loved it.”

As for me I end the day at The Orchid, the ship’s Asian Fusion restaurant. I’m feeling a lot better—especially when the huge Sushi Boat arrives.