Day Two at the Wizarding World of Harry Potter 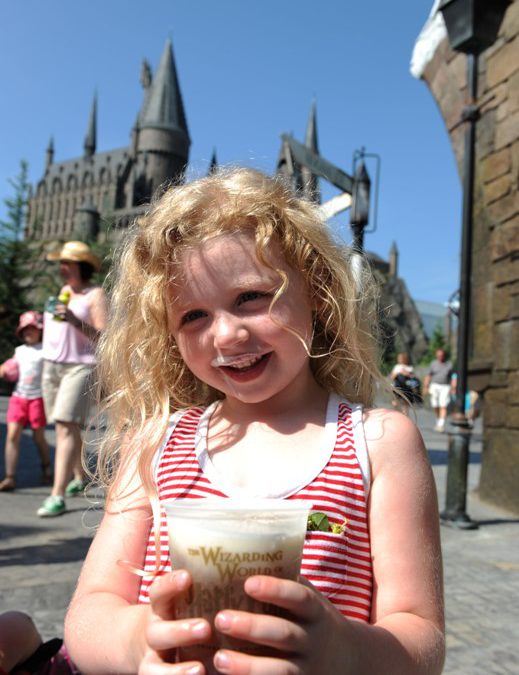 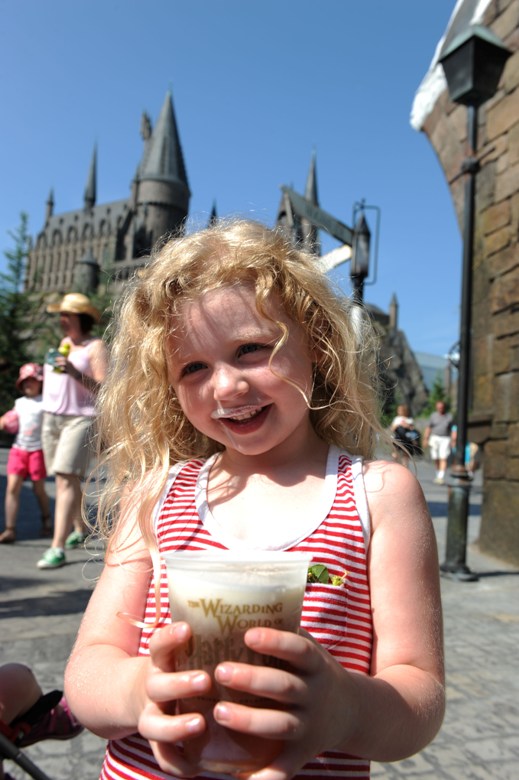 Guests to The Wizarding World of Harry Potter enjoy Butterbeer

For the second day in a row on vacation, Sue Goodwin and Shamarie Johnson have hailed their teens out of bed before 6:30 am.

“Getting here early is the way to do it,” says Goodwin, from Charleston, SC.

At 7:30 a.m., they are the first in the line that already is hundreds deep waiting not so patiently, but happily, for the early-access admission to the Wizarding World of Harry Potter at Universal Orlando (www.universalorlando.com) that has just opened. Only those who are staying at one of Universal’s three hotels or have special packages can enter the park an hour early and these folks are taking full advantage of that perk.

Rachel  Mastalski certainly thinks it’s worth losing a little sleep to beat the crowds.  The 20-year-old from Chicago—here with her family—was first in line yesterday and is back for a second go.  “I just about fainted when I went into Hogwart’s Castle. It was so cool,” she said.

That of course is exactly like what Universal officials like Thierry Coup, the vice president overseeing Universal Orlando Creative and one of the key players in creating Harry Potter’s world, like to hear.

“In every shop window what you see is the attention to detail,” he tells me—pointing out the authentic wrappers (how about the Puking Pastille Machine?) that fans will know from the Harry Potter books and the movies. Chocolate peppermint toad anyone?  Berty Bott’s Every Flavour Beans (watermelon or sausage?)

There’s the Monster Book of Monsters –the book   tries to attack anyone who attempts to open it and the only way to subdue it is to stroke its spine), and Sneakoscopes toys, collectable brooms at $250, robes and ties and wands galore.

Buy a Marauders Map for more than $70 or a  fluffy three-headed dog for less than $30  I’ve never seen people wait in line so long just to get into a shop or load up so much on souvenirs once they are inside—not these days.

But then I haven’t seen too many shops like Ollivanders—lined with floor-to-ceiling wand boxes and manned by an official Wandkeeper.  People were waiting over two hours to enter—just 25 at a time for the five-minute “experience.”

”The wand learns from the wizard and the wizard from the wand,” the Wandkeeper tells us, standing behind the counter in the small room that is lined floor to ceiling with shelves packed with wands in all kinds of boxes.   He explains it is very important to choose the right wand for you.”You will never get such good results from another wizard’s wand.”

He chooses Meghan Pahel, a 23-year-old recent college grad from Orlando to demonstrate the process.  Should it be one with dragon heart strings or phoenix tail feather? One she tries makes shelves collapse instead of boxes levitate (magically righted a second later). “Definitely not your wand!” he says.  Should it be longer or shorter? Pliable or hard?  The crowd is taking in every word, the kids all wishing they were the “chosen one.”

Finally,he chooses one made of Willow that is “very good for charming work” and makes the lamp flicker and music play.  Unfortunately, Meghan jokes, she doesn’t have enough money today to buy her wand but that doesn’t dim her enthusiasm a bit.

The 20-acre Wizarding World—just one area of Universal’s Islands of Adventure—was five years in conception and three in the making, with the team here working closely with the film team—so closely that they have filmed some scenes for the  first of two films based  on the seventh book, Harry Potter and the Deathly Hallows, opening in  November.

“There are thousands of artifacts,” he says–owls that flap their wings, Hermione’s ball dress and Harry’s dress robes, a Fanged Flyer Frisbee, Butterbeer (tastes like shortbread and butterscotch) and Pumpkin Juice (kind of a tangy cider).

Coup explains that the number one request from Potter fans was to visit Hogwart’s Castle so that is what Universal delivered-in spades– in their Forbidden Journey ride where waits have stretched as long as two hours. This is a whole new level of  immersive  experience… Each time  you ride, depending on where you sit,  you will have a different experience– feel  the Dragon’s breath more, or come closer to the spiders.

Fans love it. “It really took me to Hogwarts,” said Addison Snidele, 16, from Washington DC.

Fourteen year old Emily Smith who had been planning this trip with her mom, friend and friend’s mom from Wallingford, CT was all raves too. “I’m not as much of a fan,”  said her mom Cherie, “but it is a lot of fun to see it with her.”

This is the generation of teens and college kids who grew up with Harry Potter, often their parents reading the stories to them or with them, taking them to see the movies.  Here, at a time in their lives when they typically don’t want to go anywhere with their  parents,  they are all too glad to share this experience—and the parents with them.

Grandparents too. Earl Ward is on line before 7:30 a.m. with his 10 and 11 year old granddaughters Olivia and Grace Oldham. They’ve come on a road trip from Dallas, he said—18-hours plus in the car. “I’ve read all the books twice,” he said. That’s the good thing about Harry Potter it opens up a lot of people to reading who normally don’t read—and I’m not just talking about kids.

“This is something we can do together and talk about together,” he adds, the girls saying they’d much rather be with granddad than their parents (Maybe there is a $31 wand in their futures?)

Coup adds that his son, now 16, grew up with Harry and from the beginning, Harry Potter has been a family experience. “Even if they are in college now, they still want to share this with their parents.”

Each time you walk through Hogsmeade, you will see something different, Coup promises. You can send a letter postmarked from the Owl Post or eat lunch (try a Cornish Pasties while kids eat mac and cheese) at the Three Broomsticks where Harry first learned that Sirius Black was his godfather.  Parents can sample special Hogs Head Brew in the Hog’s Head pub (famous because it is where Hermione first met with what was to become Dumbledore’s Army). I bought Screaming Yo-yos at Zonko’s shop (Check out the magical wizard chess display where the queen swings her sword and the night collapses.)

That’s assuming you can handle the crowds. If you aren’t staying at a Universal hotel and your kind of fun isn’t being out of the hotel at 6:30 am on vacation, Universal officials suggest coming late in the day—the park is open this summer well into the evening—when the crowds have dissipated somewhat, though you still should be prepared to wait.

Still, says Meghan Pahel, who waited an hour or more just to get into Ollivanders wand shop,  “How can you not love this place,” I grew up reading all the books and movies.  “This is like stepping into your childhood!”