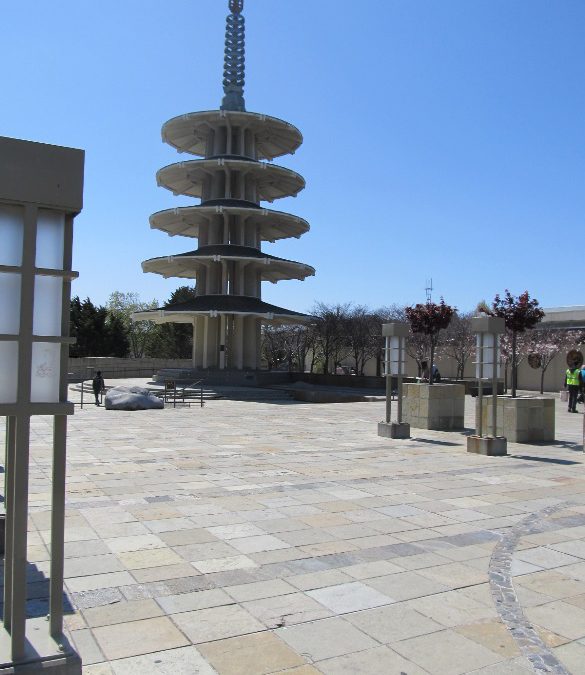 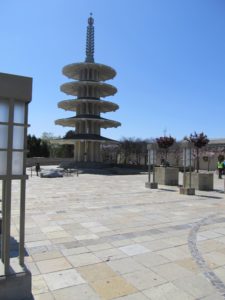 Everyone knows San Francisco’s bustling, busy Chinatown, the largest outside of Asia.

But Japantown?  “People just come here to eat,” says Dawn Shalhoup, who represents Japantown and took us on a walking tour. They don’t realize how much there is to do!”

Come the weekends of April 14 and 21 for the 45th annual Cherry Blossom Festival spotlighting traditional customs and culture that are part of the rich heritage of Japanese Americans. As part of the commemoration of the March 11th disaster in Japan, the San Francisco Japantown community and the Friends of the Urban Forest recently planted 16 new cherry trees with the idea that another 30 trees will be planted later this summer.  More than 50 cherry trees were planted just over a year ago.

The neighborhood that is now Japantown (Nihonmachi) is approximately one mile west of Union Square and is part of San Francisco’s Western Addition, a subdivision that came into being with the writing of the Van Ness Ordinance in 1855.  Take the self-guided  San Francisco Japantown History Walk along an approximately 10-block route through the heart of Japantown. Download the Map: Page 1 and Page 2

Sign on for a culinary tour with local Foodie Lisa Rogovin and her company, Edible Excursions along a flavorful path of seven stops including century-old, family-owned businesses, artisan shops and restaurants.

The main thoroughfare is Post Street, between Fillmore Street (to the west) and Laguna Street (to the east). The Japantown neighborhood is generally considered to be bordered on the north by Bush or Pine Street, and on the south by Geary Boulevard. Its focal point is the Japan Center (opened in 1968),] the site of three Japanese-oriented shopping centers and the Peace Pagoda.

The first Japanese arrived in San Francisco — or Soko as they called it — in the early 1860s. For the most part, they lived in Chinatown and in neighborhoods south of Market Street.  It was not until the devastating 1906 earthquake and fire drove many of them from their homes that they began moving to the Western Addition. As they settled here, they built churches and shrines and opened typically Japanese shops and restaurants. The neighborhood took on a very Japanese character and before long became a miniature Ginza known as Nihonmachi, or Japantown. It is here that the foundations of San Francisco’s Japanese American community took root.

During World War II, the Japanese Americans in San Francisco and in other West Coast communities were uprooted and interned in what was one of the great tragedies of the War — and a most regrettable episode in our country’s history. After the war, many Japanese American residents returned to the city. Today, nearly 12,000 Japanese Americans live in San Francisco and approximately 80,000 live in the greater Bay Area and this area has been refurbished, though stores restaurants and business remain in the hands of families who have been here for generations.

Another hidden gem is Hotel Tomo that is now run by the Joie de Vivre group and boasts colorful furniture, a wall-sized mural in every room and  even a Mecha suite with a six-foot LED screen outfitted with Xbox Play Station 3—ideal for a tween’s birthday party as was happening later the day we visited. Rooms start under $150

Certainly there’s plenty to eat—and the chance to try new foods. How about a sweet potato latte (surprisingly delicious) at yakinQ café  which is actually Korean where Red Bean shaved ice and pumpkin lattes  are also popular.

We ate Hijiki which is rice, eggplant or spicy shrimp or pickled plum wrapped in seaweed with rice at the New People building, where kids will also like the quirky offerings at the shop (maybe a dress for their kitty?)

We stop for Mochi—a pressed rice pastry with red bean paste that has a jello-like consistency at Benkyodo that has been here since 1906 and is one of the last Mochi manufacturers in the United States.   We snack on Okonomyaki—a kind of egg and beef pie (kids will love because the fish flakes they sprinkle on top seem to wave)—at Izumiya in Japan Center

Like Origami? Stop in at Paper Tree, a store that has been here more than 100 years where you can see all varieties of Origami—a sea horse, an orangutan, a cow—even the Golden Gate Bridge in the window.

Buy the kids a beginner kit and try it out in the hotel!