Dinosaur National Monument – a great place to unplug and explore 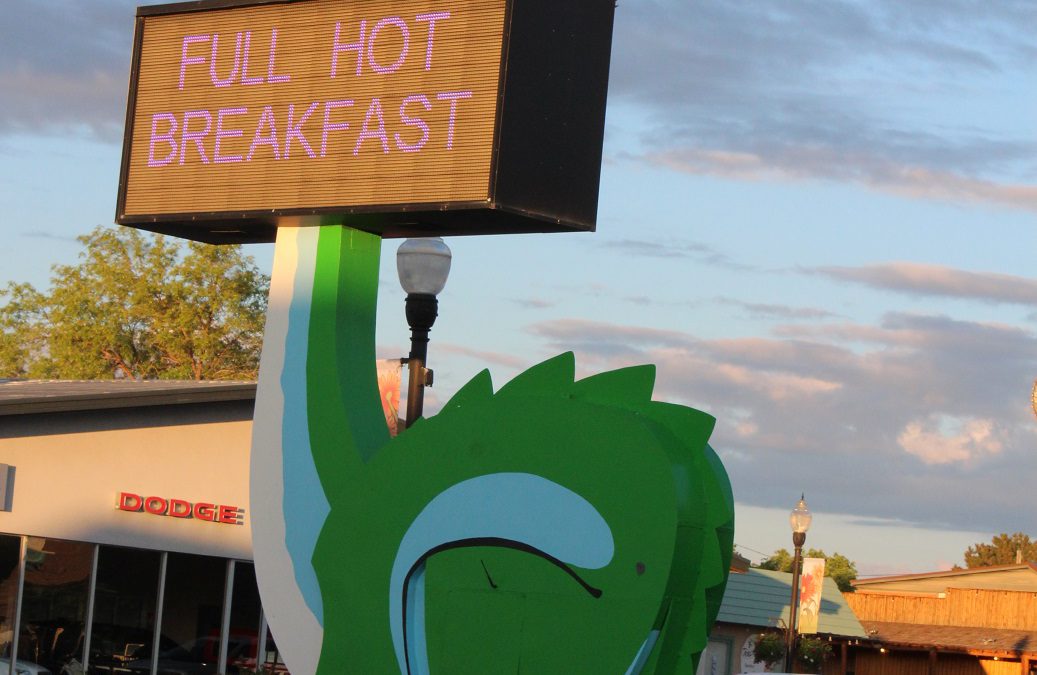 Ready to reach out and touch the dinosaur bones?

We just spent five days river rafting and camping in Dinosaur National Monument with OARS on 70-plus miles of the Yampa and Green Rivers. Declared as a National Monument in 1915, today the monument includes 211,000 acres of wilderness across high desert peaks and river canyon across two states.

The Yampa is the last wild tributary in the Colorado River System and shows us today how the river sustained the native Fremont people as far back as 800 AD and inspired exploration by John Wesley Powell in the 19th Century. It drew in homesteaders who ranched and farmed and the beginning of the commercial river raft industry  pioneered by Bus Hatch and his family in the 1930s.

You’ll find the 80-foot-long Wall of Bones and one of the few baby Stegosaurus fossils ever found at the Quarry Exhibit Hall, located over the world-famous Carnegie Dinosaur Quarry. It contained eleven different species of dinosaurs such as allosaurus, diplodocus and stegosaurus as well as fossilized bones of other creatures from the late Jurassic period. Touch real ,149 million-year-old dinosaur fossils!  Rangers can answer all of your questions during the summer.

The kids can learn more by becoming Junior Rangers at the monument while doing some fun activities.    Belknap’s Waterproof Dinosaur River Guide is also a great resource.

You can hike the Fossil Discovery Trail in just 45 minutes, Belknap’s guide suggests, or Drive the Tour of the Tilted Rocks where you can also take a hike.

Nearby, at the Utah Field House of the  Natural History State Park Museum, kids can join hands-on digs and watch as scientists prepare fossils in their lab. There is a Children’s Lab and an area where kids are encouraged to make up their own Dino stories. The Dinosaur Garden is home to 14 life-sized replicas of prehistoric animals—here is your chance to see how big a wooly mammoth really was.

For those exploring Dinosaur National Monument, the Rocks in Time exhibit can help you understand what you will see in the formations that date back far beyond the dinosaurs. Even though excavations within the Carnegie Quarry have stopped, research continues in other parts of the monument and in other rock layers besides the dinosaur-rich Morrison Formation.

The rock is a variety of colors and shape—pink, purple and gray in the Morrision Formation; light tan Sandstone on some of the cliffs with the grain pattern called “cross-bedding,” pink limestone and dark maroon rock in the Uinta Mountain Group. Kids will have fun looking for shapes in the rock — monkeys and native princesses; lizards and babies — even ghouls.

There are many hikes, mountain bike trails, off road adventures, fishing (Jones Hole Creek is famous for its rainbow and brown trout) and the opportunity to raft for a day or nearly a week in this region known as Dinosaurland.

While this area is most famous for its dinosaur fossils, the ancient Fremont Indians left behind thousands of pictographs and petroglyphs (carvings in the rock) in the caves and walls. No one really knows why it was created but we can still see antelopes, baskets, people, lizards and designs.

Some are accessible on hikes from the river; others like the Cub Creak area by car. Nine Mile Canyon is known for both petroglyphs and pictographs.

At the Jones Hole National Fish Hatchery, walk among the raceways where the fish are kept before stocking’ see the egg incubation units and follow Jones Creek down the Canyon past Fremont Indian Pictographs.

The Monument is also home to more than 400 species of mammals, birds, fish, reptiles and amphibians. We saw a Bald Eagle, Great Blue Heron, Mule Deer and more.

This is also a great place to explore the night sky — It has been designated an International Dark Sky Park, officially recognizing that the skies here have an exceptional quality of natural darkness, making the stars especially bright when you are camping.  The monument’s 2019 public program through mid-September includes opportunities to explore the night sky as well– Stargazing with Telescopes, Night Sky for the Naked Eye, Night Hikes Under Moonlight, and the annual Skies Over Dinosaur Astronomy Festival.

We stayed at the affordable-and excellent Dinosaur Inn & Suites in Vernal before our trip. (Don’t miss the pizza at Antica Forma next door.)  There are many options as well for campers including in Dinosaur National Monument and the Dinosaurland KOA in Vernal.

Whether you raft, camp or stay in a hotel, you are guaranteed a memorable adventure—and one guaranteed to get the kids off their devices to look around.