Discovering the beauty of the California Coastal region 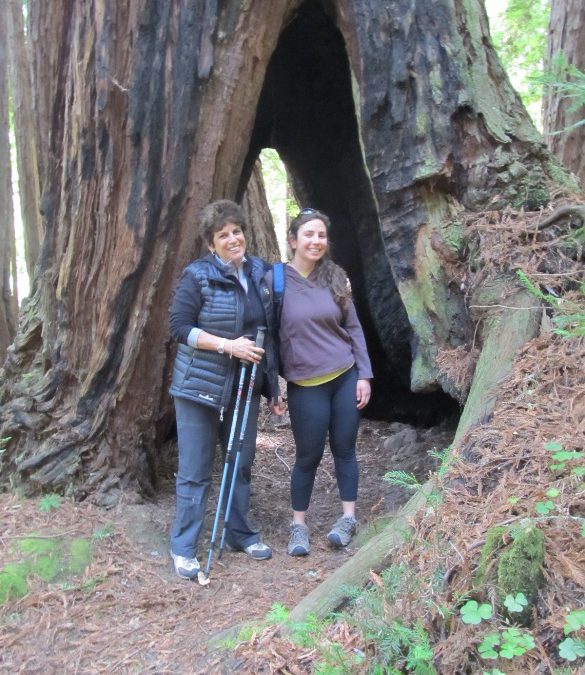 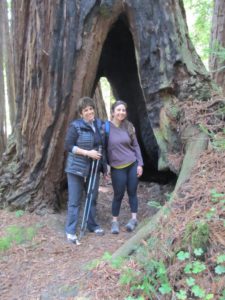 Eileen and Reggie pause in the redwood grove

We’re walking past groves of soaring redwood “families,” some with their innards carved out as the result of forest fires.

But we’re not in a crowded national park. In fact, we’ve pretty much got the hiking trail to ourselves in Butano State Park in the Santa Cruz Mountains, midway between Santa Cruz and Half Moon Bay and only a little more than an hour from San Francisco. Butano State Park — one of the least known of the California parks — is home to a spectacular redwood/Douglas fir forest.

During our five-mile hike, we see plump yellow banana slugs, the tiny Calypso orchid and blooming trillium, a member of the lily family. But the best part is the conversations with my daughter, Reg, who lives across the country from us in San Francisco. I’d forgotten how conducive hiking is to catching up!

We’re spending the weekend here in Half Moon Bay with Reg, who works near here, and her boyfriend Dan Foldes, and I can’t think of a better respite from city living — a spectacular coast and beaches (great tide-pooling), the chance to hike through the redwoods, visit farms (ogle the baby goats) and restaurants that have been at the forefront of the farm-to-table movement.

Asparagus is in season and it’s served to us — gently fried in a light batter at Pasta Moon in Half Moon Bay, which is celebrating its 25th anniversary. From the beginning, these restaurants have been known for serving what is in season from local farmers. You can point out veggies to the kids in the fields and farmer’s markets and then bring them here to eat them.

There are farms that date back to the 1800s (come in fall for the big pumpkin festival), miles of white sand beaches (here’s the place to horseback ride along the beach), redwood forests and hiking and biking trails along the bluffs and among the mountains. There’s kayaking, fishing and even the chance to see how cheese is made. And, of course, the chance to sample plenty of farm-to-table good eats.

This area, we learn, is home California’s first and only broad-based ecotourism visitor program, through which more than 30 farmers, fishermen and community business members have come together to offer visitors hands-on activities and a chance to meet local residents. In order to be included in the Ecotourism Map, all businesses had to agree to follow certain environmental standards. You have your choice of options where to stay — even Pigeon Point Lighthouse, one of the tallest and most photographed lighthouses in the country, is now a hostel!)

We opt to pamper ourselves — along with other families, we meet — at the Ritz-Carlton Half Moon Bay, one of the most spectacular hotel locations I’ve ever seen. The hotel is high on scenic bluffs overlooking the Pacific Ocean with two golf courses, tennis courts, walking trails to the beach and outdoor fire pits. (They leave us s’mores kits in our room.) Some rooms have their own private fire pits where guests can sit and take in the ocean.)

San Franciscans make the drive just for the fantastic Sunday brunch, (which will be especially busy Mother’s Day). It offers more than 300 items, much of which, according to Executive Chef Xavier Salomon, comes from a dozen local farms and purveyors. And not a chicken finger in sight. Chef Salomon says he doesn’t do “kids’ food” at the brunch and parents rarely ask for it — not when kids can eat delectable dim sum and sushi, mashed potatoes, roast beef, veggies in season and mini quiches. “And, of course, they go crazy for the desserts,” Salomon says with a smile. (There are Nutella crepes, apple, blackberry and peach marshmallows, chocolate mousse, flan, tiny tarts, fresh berries and cream and miniature cakes too pretty to eat. Chocolate raspberry dome, anyone?)

Good thing there are so many hiking options to walk off brunch! But with four regions to explore around Half Moon Bay — the North Coast, Half Moon Bay, the South Coast and the Redwood Region — we can’t fit it all in one weekend. We simply follow my daughter’s lead to some of her favorite places.

When we arrived, we stopped at Harley Farms Goat Dairy in tiny Pescadero to sample goat cheese (do we want pistachio and apricot, sun-dried tomato, chive?) — the best I’ve ever tasted — for our picnic overlooking crashing waves at Bean Hollow State Beach. Dessert? Creamy fudge made with goat milk. At Harley Farms, kids can watch as goat cheese is made and ogle the baby goats! (Starting in May, every Saturday, you can check out the Coastside Farmer’s Markets.)

As we walked along Pebble Beach with its distinctive small pebbles instead of sand, local kids explored the tide pools, oblivious to the cold water and wind. An Anemone! A Sea Star!

One night, we headed to dinner at the popular Peruvian restaurant La Costanera, located on a cliff overlooking the ocean. Spectacular views, spectacular food. (The restaurant is Michelin rated.) We feasted on ceviche (there are more than a dozen to choose from), empanadas (the best I’ve ever eaten), Causas (chilled whipped potatoes topped with mushrooms asparagus and avocado) and excellent seafood Paella. Despite the gourmet eats, I’m told the place is popular with families and is noisy enough that you don’t have to worry about your kids disrupting anyone’s dinner.

Everywhere here is casual and kid-friendly, it seems. The Pastorinos live nearby, but checked in at the Ritz with their two kids (ages 11 and 16) for a special treat, settling in on the Club Level where they even gave us boxes to take snacks for our hikes. “It is so easy,” Dana Pastorino said.

So easy to entertain the kids and at the same time, help them connect to the natural world.

(For more on Eileen’s visit to San Francisco and Half Moon Bay, read her Travel Diaries.)