Discovering the history and culture of Berlin, Germany 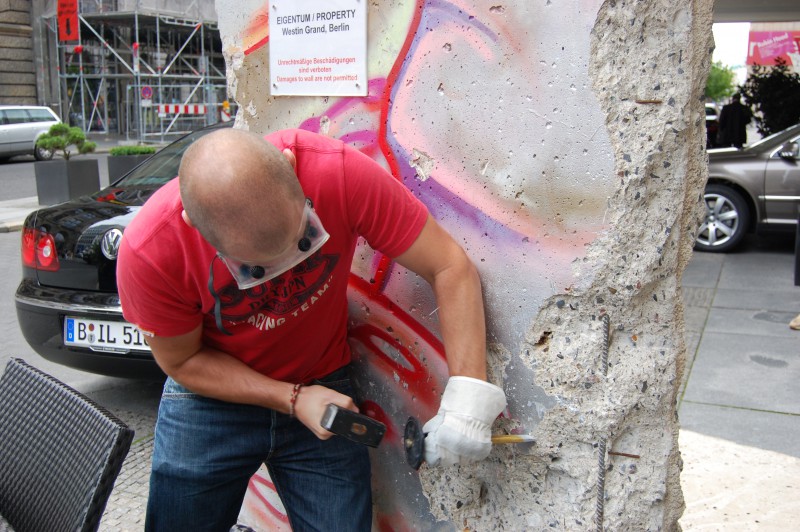 Guest of the Westin Grand Berlin picking at the Berlin Wall

Could you have done it?

One family zip-lined to freedom — in a home-crafted zip line. A woman escaped hiding in a hollowed-out surfboard strapped atop her car. Two other families made it in an impossibly small  hot-air balloon. There were escapes in hollowed-out machines, in repurposed cars, in a kayak and hang glider, through tunnels. Incredible!

From the time the Berlin Wall went up in August 1961 till it was torn down in November 1989, thousands of East Berliners made their escape the short distance to the West in the most ingenious ways. At least 2,000 died trying. Today, it’s hard to believe this beautiful city was once divided by an ugly wall.

The Westin Grand Berlin, where we stayed, in historic downtown Berlin, was in East Berlin. Today, guests can take hand to chisel and take home a piece of the wall that stands in front of the hotel as a reminder of that dark period in history.

“Freedom was worth the risk, said Alexandra Hildebrandt, the director of the quirky Mauer Museum at Check Point Charlie, which sits at the original border crossing between Cold War America and the Soviet sector of Berlin. That’s where you’ll see some of these escape vehicles.

Dr. Rainer Hildebrandt, Alexandra Hildebrandt’s late husband and a veteran of the resistance during World War II, chose the locale carefully — so his team could help guide those trying to make it to the West. Journalists would watch the border from an upstairs window; grateful escapees donated their means of escape. Berlin was considered the epicenter of covert espionage during the Cold War, as the new Spy Museum details. (How fast can you make it through a laser maze?)

Hildebrandt guides us through the exhibits — on Gandhi, on President Reagan, who so famously said in West Berlin, “Mister Gorbachev, tear down this wall!” The vast majority of visitors are young people, at least half from oversees. A new exhibit soon will be devoted to Syrian refugees. This museum shows the lengths people will go to try to reach freedom, Hildebrandt said.

That, of course, was true during the Holocaust as well. Of course, you can’t visit Berlin without considering the plight of the Jews and others during World War II who couldn’t escape. Germany’s capital city now confronts the horror head-on at places large and small. We were fortunate to take a tour of Jewish Berlin with Milk and Honey Tours.  (Read my travel diary about our experience.)   You’ll notice the ‘stumble stones,” small brass plaques by artist Gunter Demnig embedded in the cobblestone walks memorializing those who had lived there before being deported. You will find these in other German cities too.

There is, of course, the haunting Holocaust Memorial at the Brandenburg Gate constructed of concrete pillars of various heights and, if you are traveling with teens or grown kids, the much visited Topography of Terror Documentation Center  sits on the historic site where the institutions of Nazi persecution were headquartered — today the site focuses on their rise to power and their crimes.

But I don’t want to give the impression that Berlin is one sober site after another. In fact, it’s a terrifically vibrant city that enables you to teach the kids some history while you explore a city where technology, tolerance and the arts, including fashion and modern design, have all come together. Teens especially will love the hip vibe.

Consider that there are 440 galleries and 180 museums in Berlin, including Museum Island with five museums on Spree Island in the historic city center — the entire complex has been designated a UNESCO World Heritage Site. (Check out the App “Going Local Berlin.”) Since reunification, historic buildings have been restored and new ones built.

Even if you aren’t Jewish, take time at the Jewish Museum Berlin, one of the largest Jewish Museums in Europe, which encompasses three buildings two designed by architect Daniel Libeskind with a line of “voids” (empty spaces over 60 feet tall that represent the loss to society, as a result of all of the Jewish lives lost during the Holocaust). There is an exhibit that asks kids what they would take if leaving home forever, showing what some German children chose — a poetry album, a compass, a toy construction kit.

But I don’t want to give the impression that Berlin is one sober site after another. In fact, it’s a terrifically vibrant city that enables you to teach the kids some history while you explore a city where technology, tolerance and the arts, including fashion and modern design, have all come together. Teens especially will love the hip vibe.

It’s also a bargain, with hotel rates considerably less than London and Paris, according to trivago, the mega hotel search engine, especially in winter and early spring. You might be able to get a room for a little over $100 a night. (The Westin Grand Berlin, in Berlin’s historic center, for example, is $190 a night; Flights can also be cheaper. Lufthansa has a deal with flights some $300 less than in summer and bargains on their premium economy too; You’ll also find deals on Air Berlin right now with new service from Dallas,Boston and San Francisco.)

The fashionistas in your crowd will love the trendy boutiques, as well as the Mall of Berlin filled with hundreds of shops. Incidentally, the mall is built on the site where Europe’s largest department store once stood. The foodies will love the vibrant food scene — we certainly did — from the local sausages served on crisp rolls, the historic covered markets (the 120-year-old Markthalle Neun hosts Street Food Thursday markets) to Michelin starred eateries like Nobelhart and Schmutzig where everyone sits at the counter watching the chefs and eats hyper local. Herbs and spices not grown locally aren’t used, nor is chocolate, explained restaurateur Billy Wagner and his chef Micha Schafer. Teens will love the pure theater of it — the small, beautifully plated 10-course meals, which at about $86 seems a bargain.

Younger families, as well as those with older kids, will be thoroughly at home at La Soupe Populaire in what was once the huge Botow Brewery in East Berlin, but today is the restaurant spearheaded by celebrity chef Tim Raue, an art gallery and Le Croco Bleu bar with its artisanal cocktails and rare spirits. You look down on the art as you eat Berlin classics (or a menu that is inspired by the art). Local food critics say this is one of the best value-for-money deals. Maybe that’s why reservations are so hard to get.

I have to agree. I’m guessing President Obama did too when he was served this dish in Berlin. Another meatball, please!