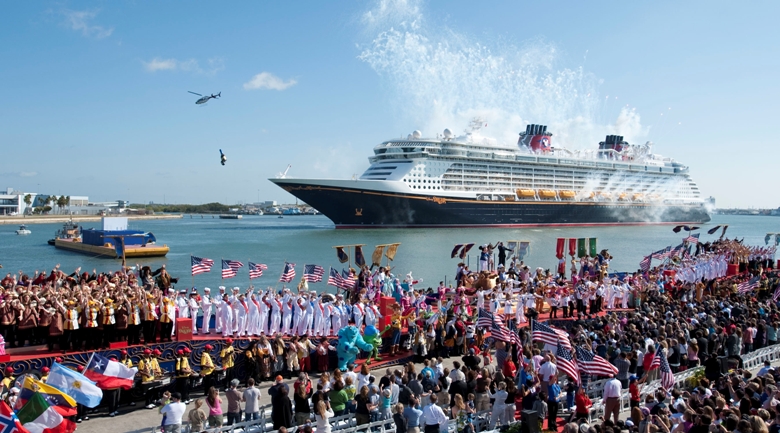 You’ve got to hand it to Mickey Mouse.

At the recent christening of Disney Cruise Line’s new Dream, complete with fireworks, music, dancing, everyone’s favorite characters and plenty of magic, Mickey and his pals, including top Disney brass, promised a ship where family vacation dreams would come true and they’ve delivered — big time — for parents, grandparents and kids of all ages — whether they are first-time cruisers (as many are expected to be on this gleaming ship, 40 percent larger than Disney’s other ships) or veterans of many sailings (http://disneycruise.disney.go.com/ships-activities/ships/dream/).

Other cruise lines, of course, are also catering to the growing family cruise market (more than a million kids now cruise each year) with their megaships, water slides and kid-friendly entertainment. (More about that in an upcoming column.) That’s a smart move at a time when kids increasingly drive vacation decisions, according to a new Ypartnership survey of kids across the country. The survey found that cruises top kids’ list of dream vacation destinations, right behind a trip to Walt Disney World — 77 percent of those surveyed want to go on a cruise.

From what I saw on a two-day preview cruise, following the christening (Jennifer Hudson, who once entertained onboard another Disney ship, and also spent time onboard with her young son, is the godmother), the Disney Dream has upped the ante — significantly — for what families can expect onboard, though they shouldn’t expect a bargain.

There are the big new things, like the AquaDuck Water Coaster that sends you careening in rafts (not as fast as I expected) inside clear acrylic tubes around the ship (even 12 feet over the side 150 feet above the ocean). I worry the lines will be long when the ship is full! For the littlest cruisers, there’s an expansive (some 1,500 square feet), shaded water play area called Nemo’s Reef where diapers are welcome. The expanded on-board nursery, modeled on “It’s a Small World,” has room for 80 children starting at age three months (Parents pay $6 an hour for the service) and it’s a standout. The pastel colors and fanciful furniture make you smile just walking through the door.

Teens will think they’ve discovered family vacation heaven when they step through the door to VIBE, their own club to which only teens are admitted, complete with private sundeck, pool and hot tub, as well as the technology to create and edit videos with the latest software. Did I mention the 103-inch LCD screen or the built-in pods where they can “chill” watching videos on their own, listening to music or playing video games? They can also go to their own Chill Spa with special spa treatments (Hot Chocolate Wrap or Surfer’s Scrub perhaps?) The best part: the equally terrific Tween Club Edge is in another part of the ship so pesky younger sibs won’t be anywhere near.

No child will look at paintings the same way after standing in front of a piece of the Enchanted Art displayed around the ship, which comes to life with several seconds of animation as you stand in front of it — and it won’t be the same each time. They won’t think of restaurants the same way either after a visit to Animator’s Palate where Crush, that loveable, hip sea turtle from “Finding Nemo” speaks to them by name via giant video monitors on the walls. Crush literally “works” the room, engaging the kids in real-time conversations.

I loved the intimate spaces in the Oceaneer Club and adjacent Oceaneer Lab for kids 3 to 10. Here they can choose from many activities, including re-arranging the face of a giant Mr. Potato Head in Andy’s Room where “Toy Story” seems to come to life or dressing up like fairies and princesses in Pixie Hollow, complete with hundreds of fairy lights twinkling from the leaves of a pixie tree. Grade-schoolers can try their hand at sketching favorite characters in the Animator’s Studio or create and record their own songs in the Song Studio. Characters, of course, come by to share the fun. Ready for a pirate lesson from Captain Hook? You won’t believe the interactive Magic Floor either where kids’ movements control the action below their feet. (Think flying over London with Peter Pan.)

“The idea is to use all of the spaces to enhance creativity — spaces where they can let their imaginations go wild,” says Disney veteran Erika Solano, who oversees the youth activities onboard and the 80-plus counselors from more than a dozen countries.

As a result, parents and grandparents will realize this is one family vacation where they might actually get a break themselves. Spaces have been designed to enable exactly that, including an adult-only pool area, a big spa and fitness center, adult-only excursions (rum tasting in Nassau), an adult-only beach on Disney’s private island Castaway Cay and Disney’s hip Adult-only District entertainment area. I loved the different bars — Pink for champagne and The Skyline with its ever-changing “windows” showcasing urban skylines around the world and specialty drinks to match them.

“To create a great family cruise experience, we have to create a great experience for each member of the family,” Thomas Staggs, the chairman of Walt Disney Parks and Resorts, and himself the father of three young sons, said in an onboard interview. The goal, he continued, was for families to “create great memories,” by both doing things as a family and on their own, “coming back together to share their adventures.” That concept, I think, could be a recipe for as close to a perfect family vacation as you will get.

Sitting one night in The Skyline with my Paris-inspired Martini Royale, I realized that along with all the “wow” on this ship, the little things Disney has done could make all the difference to a traveling family. For example, counselors will come and pick up the kids from dinner so you can relax over that second glass of wine or coffee. There’s no charge for soft drinks like on other ships, nor does Disney charge for late-night programming for the kids, as do other cruise lines, so parents can come guilt-free to the District for a drink, or a comedy show. They have no worries lingering over dinner at the new first-rate Remy French restaurant where the $75 charge per person will seem like a bargain by the time you’ve left three hours later having consumed some of the best food you’ve eaten in ages — or ever.

Less-expensive indoor cabins are suddenly cool thanks to “Magical Portholes” that not only provide guests with real-time views outside the ship but visits from favorite animated friends who skip, swim or fly across the windows.

Beds have been raised enough in the cabins so that you can slide your suitcases and duffels underneath, leaving you more floor space. Cabins have a split bath and a half, with a sink and tub/shower in one room and sink and toilet in an adjacent one — ideal for families.

The two complimentary “wave” phones you get make it easy for the counselors to keep in touch with you via phone or text — and for you to keep tabs on your tween or teen as they wander around the ship or Castaway Cay on their own.

There’s just one downside: Like Disney World, on your first Dream cruise, you and your gang simply won’t have time to experience even half of what’s here, including dozens of activities each day (a tutorial on paper airplanes or towel animals?), first-run films and Broadway-quality shows. So don’t even try to do it all. Just relax and enjoy.

(For more on Eileen’s visit aboard Disney’s new Dream, read her Travel Diaries.)