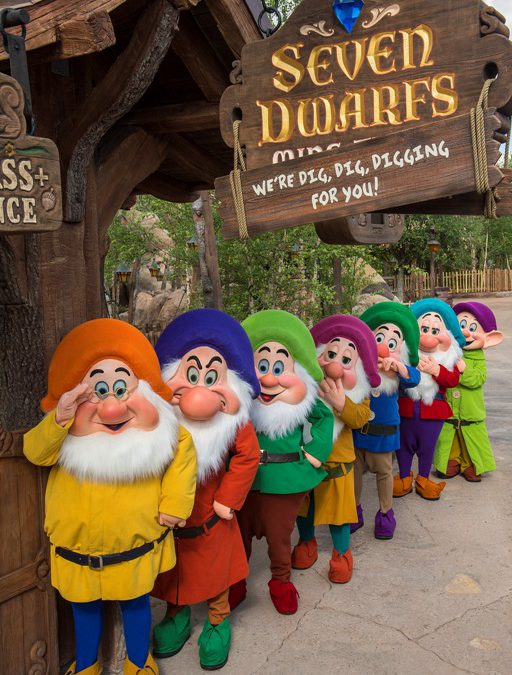 ORLANDO (Day three of three) — Snow White and the Seven Dwarfs was pivotal for Walt Disney and his company when the movie was released in December, 1937, the first full-length cell animated feature film.

The movie was wildly popular from the first, proving all those wrong who had dubbed the idea of a full length animated film “Disney’s Folly.”  The next week, Walt Disney and the seven dwarfs appeared on the cover of Time magazine while the New York Times said: “Thank you very much, Mr. Disney.” Walt Disney used much of the profits from Snow White and the Seven Dwarfs to finance a new $4.5 million studio in Burbank, CA,  the location on which The Walt Disney Studios is still located.

Since then, of course, generations of children have loved the story—the German fairytale was first published in 1812 by the Brothers Grimm—the movie and the enormously popular princesses who have followed Snow White.

The story has everything—a wicked stepmother Queen who wants the beautiful Snow White killed; the young girl left in the woods and befriended in the forest by the dwarfs. The stepmother, when she discovers Snow White is alive, tricks her into eating a poisoned apple making her fall into a state of suspended animation that can only be cured by the power of love’s first kiss. Thinking she is dead, the dwarfs put her in a glass coffin and watch over her until a prince visits, kisses her and breaks the spell, taking her to his castle to live happily ever after.

Now Walt Disney World’s newest attraction—the Seven Dwarfs Mine Train—set to open  May 28—is to become the centerpiece of the New Fantasyland area at the Magic Kingdom. “It’s the finishing touch,” said George Kalogridis, the president of Walt Disney World.

New Fantasyland is just beyond Cinderella’s castle and has doubled the size of the most popular land in the most popular theme park in the world, said Jon Georges, the Walt Disney Imagineering director of Creative Development when the new land first was unveiled at the end of 2012. The iconic Dumbo ride has doubled in size; there’s the chance to step through the Enchanted Mirror in Belle’s cottage to the Beast’s castle; you can come for lunch or dinner at the Be Our Guest restaurant.  Or get wet at the Casey Jr. Splash ‘N’ Soak Station where monkeys, elephants and camels squirt water. The Barnstormer coaster and Pete’s Silly Sideshow let you get out of the sun while taking pictures and getting autographs from Minnie Magnifique and Madame Daisy (Daisy Duck as a fortune teller), among others.

The most popular attraction, of course, is the Princess Fairytale Hall, where guests can meet Cinderella and other visiting princesses. The wait was 400 minutes one day recently without a pre-reserved time because the Frozen princesses Anna and Else were there!

Now Disneyphiles are excitedly waiting for Seven Dwarfs Mine Train—I got a preview ride recently. The story begins as guests cross a bridge through a forest, seeing the Dwarfs’ cottage in the distance. Everything was designed with the historic film in mind—down to the lanterns, ropes, pulleys and buckets of jewels found in the mine scenes of the film.

You board mine cars designed to look like they were made of wood by the Dwarfs and used to haul rocks and jewels.  Kids will like that as you twist and turn through the mine, the cars rock back and forth, outside through wooded landscape and then back into the mine where you can spy some of your favorite Audio-Animatronics dwarfs—Sleepy, Doc, Grumpy Bashful, Sneezy, Happy and Dopey.

Who is your favorite?