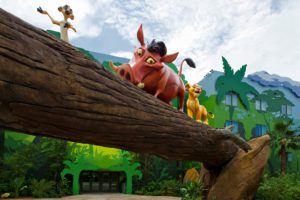 These days, not only do we want more room to spread out (think two rooms, two bathrooms, two TVS) but we want the experience to be fun. And we don’t want it to cost a bundle either. Did I mention that Disney has just unrolled free Wi-Fi at all of its resorts?

Welcome to Disney’s new Art of Animation Resort with four different wings that celebrate favorite characters—Finding Nemo, Cars and Lion King.  And there’s plenty of room to spread out with 1120 family suites (there are 864 rooms too). Keven Myers, the vice president of Walt Disney World Resort Operations who oversees the 26 resort hotels, notes that this hotel was originally designed to be rooms, not suites.  But after the popularity of suites introduced at Pop Century Resort—prompted to provide rooms that slept six in the value category–they changed the concept. “My intuition is we will see more of this,” he said.

And why not? The Art of Animation Resort tells the story of the animation process—starting with sketch boards that are set up outside so kids can begin to draw as they are waiting for parents to unload the cars or get their luggage.

Kids will love the themes.  I stayed at the “Cars’ wing where there is a road to the Cozy Cone Motel, Cozy Cone pool and cone-shaped cabanas.  Parked at the entryway, Sheriff and Doc Hudson are welcoming us. Inside my suite, there are orange cones in the carpet, the pull out bed looks like the back seat of an old car and the tool chest is a dresser. Did I mention the bathroom design is inspired by a car wash?

Stay in a Lion King Suite and Zazu is on the headboards; Kids can chill on a leaf-shaped chair.In the suites, there are jellyfish lampshades in the Finding Nemo buildings.

Parents will love the space, the fridge and the microwave.  Who wants to eat out every meal, even at a resort?

Even the lobby is fun where you can watch see how favorite characters like Ariel  Lightning McQueen,  Nemo and Simba evolved from sketches to finished image.  Check out the huge chandelier composed of 77 storyboards!

I loved the Landscape of Flavors food court where you could get a customized omelet, fruit plate or smoothie for breakfast—all made to order.  Original art backgrounds from films decorate the walls.

Disney has themed other hotels too with royal and pirate rooms, for example.  But it’s the suites that are the home run here, especially as multigenerational families continue to travel together.

Next time, I need a Cozy Cone cabana.