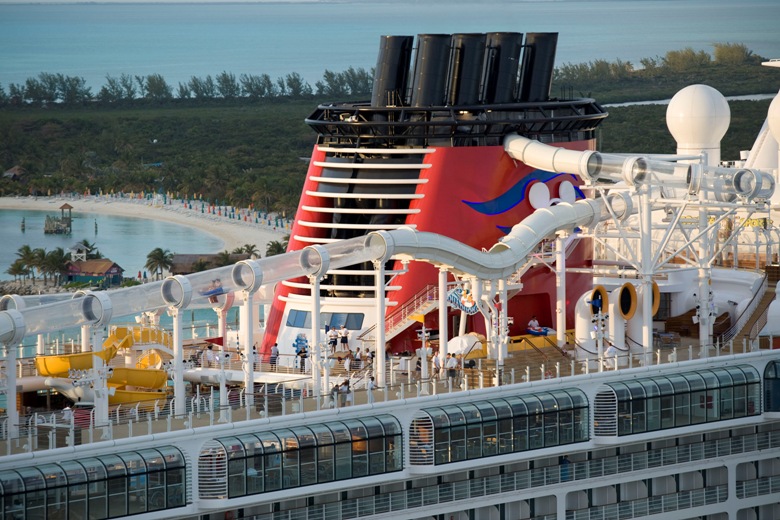 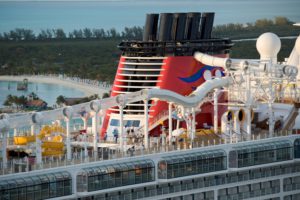 DAY 3 — Yes, vacation dreams can come true. At least Mickey Mouse thinks so as he promises dreams of adventure, friendship, romance and fun at the rollicking Christening of Disney’s new Dream.  www.disneycruise.com

And after a night aboard, I’ve got to confess Mickey may be right, whether you are three, 13, 33 or 53, whether you love cruises or not, this ship is something special.

For one thing, it is larger than its sister ships the Wonder and the Magic—as much as 40 percent larger with passenger  capacity of 4,000 rather than 2,700. That means there are just more terrific spaces.

We’ve got to start with the AquaDuck –some 765 feet long spanning four decks in height and jets that gush some 10,000 gallons of water per minute to push riders—two at a time in rafts—upward and forward around the ship in clear tubes (at one point 12 feet over the side! ).  “We thought about what we could do on the ship and add a wow,” said Peter Ricci, who helped oversee the team who built and designed Aqua Duck. “This is a wow.” A Tip: Ricci adds it is more fun if you go with another person because you’ll go faster!  (I thought it was faster to sit in the front!)

I also love the big ( 1500 square foot  Nemo’s Reef water play area just below AquaDuck, where toddlers and preschoolers have no fewer than 15 different water jets and their own small water slide along with favorite characters like Squirt and Pearl in a shaded area. Diapers welcome!

I think the kids’ areas are equally a wow.  No parent should be nervous about leaving an infant at the expanded and enhanced It’s a Small World cheery nursery where infants as young as three months  can stay while parents get a guilt-free break ($6 an hour) with the latest interactive toys and a staff of one to each four children. There are horns that honk, wheels that spin and a boat that “floats” along a soft-surface floor, all in pastel colors. (A tip: Book your child’s time here as soon as you book your special adult dinner, spa or shore excursion. You can only book 10 hours until you are on board and then may be able to book more time, depending on demand.)

The other kids’ and teens spaces are like nothing I’ve ever seen.

You might not think Disney cruises are for teens until you check out the brand new VIBE—9,000 square foot club where teens can create videos, learn how to be a DJ, curl up in a “pod” and listen to music or watch a movie, or “lay out” on their own private sun deck complete with ping pong table and hot tub. There will be smoothie and coffee hours.  They can do Yoga on the beach or even go with counselors to the fitness center, said Maureen Landry, who directs entertainment operations for the Disney Cruises.

Even better, teens will collectively decide on the first night of the cruise what activities they want to do. And there’s room for 300 kids at VIBE (they are issued a special key card for entrance), which is staffed from noon till 2 a,m. Did I mention there is an entire “Chill Spa” separate spa area just for them with treatments like a “hot chocolate wrap” or a “fabulously fruity facial.”

The tweens now have a separate area in a different part of the ship — EDGE — with everything from the chance to cozy up on a giant bean bag and read your Kindle (I saw one 12 year old girl doing just that), play video games on a wall-length screen, make and star in your own newscasts and photo postcards. It’s all about the latest technology.

That’s the case for the younger kids too—from the “MagicArt” around the ship that literally changes before your eyes, a “Magical Porthole” in inside cabins that both show a real-time view outside the ship while characters dance and fly across the window,  to the “Magic  PlayFloor” in the Disney Oceaneer Club (for kids 3-7) and the adjacent Oceaneer Lab (for kids 7-10) where kids can play interactive games (think the London skyline beneath your feet  as you “fly” with Peter Pan).

The idea is to use the spaces to enhance creativity, and let their imaginations go wild,” says Disney Cruise Line veteran Erika Solano, who is manager of youth activities aboard this ship and oversees the staff of 80-plus charged with keeping kids, tweens and teens happy.  In case you are wondering, they come from 13 different countries, speak a handful of languages and are required to have at least two years experience working with kids before being hired.  Nearly half have come from the other two Disney ships.

Like the spaces for the teens and tweens, the Oceaneer’s Club and adjacent Oceaneer’s Lab have been redesigned so that kids can choose to participate in one of several activities going on at the same time. The overall space is not only larger (the lab and club can hold 400 children) but has been built with  intimate spaces where  kids can play among the bigger-than-they-are characters from Disney’s Pixar’s Toy Story in Andy’s Room (Want to play with a gigantic Mr. Potato Head or crawl through Slinky Dog?). Check out the Monster’s Academy where they can try the “Laugh a meter” or get dressed up like a princess in Pixie Hollow, the magic land where Tinker Bell and her fair friends live (hundreds of fairy lights twinkle among the leaves of a “pixie tree” They play computer games inside a bright blue and yellow submarine.

There are of course plenty of character interactions (at least two a day) where Belle might read a story or Captain Hook give a lesson in pirating while Tinker Bell will  show kids how to “discover” their own unique talents.

The 7-10 year old crowd at the Oceaneer Lab  can “navigate” the ship through a digital sea,  make their own computer generated art or try their hand at animation or create their own tunes using special song-making software. They can record their hit so mom and dad can listen too. Animated characters like Crush from Finding Nemo and Stich, the alien from Lilo and Stitch, actually chat and joke with the kids in “live” conversations  via giant plasma screens.

“It’s not about being in front of the computer,” they can do that at home,” says Solano. “The idea is to use the technology make connections with the other kids (they are figuring on 1100 to 1600 per cruise) and counselors.”

Be forewarned: The kids won’t want to leave.

Next: You will be pressed to do even half of what this ship has to offer