Don’t touch the produce! At the Rialto Market in Venice, Italy 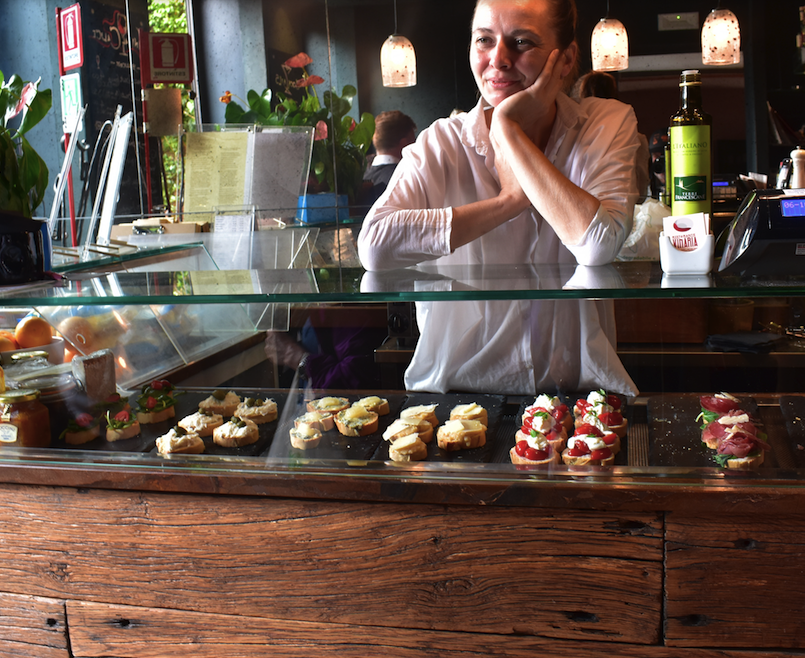 No squeezing melons, choosing your bunch of grapes, feeling for the ripest tomatoes. And heaven forbid you should fondle the octopus. 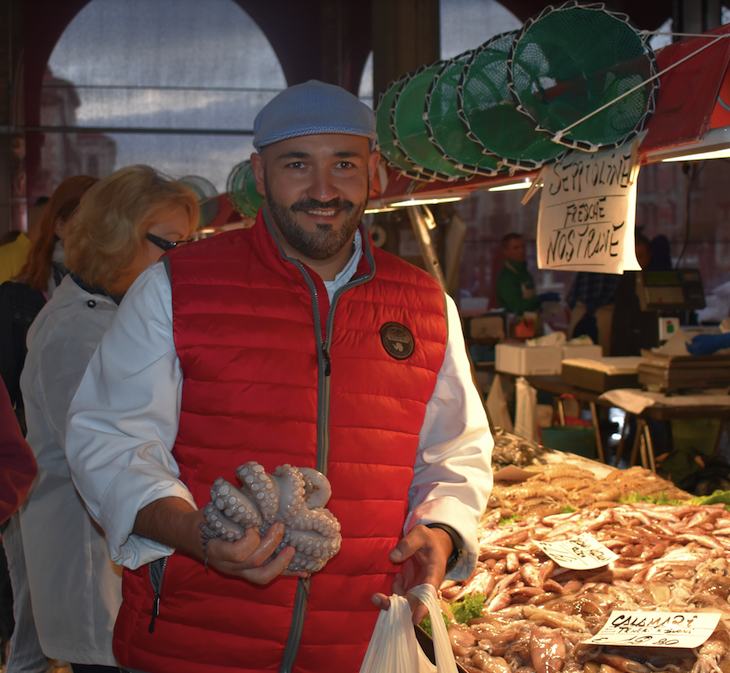 At Venice’s famous centuries-old Rialto Market, the purveyors ask you what you want, what you plan to cook — and then they choose for you.

“They know you, they know your kids, your dog,” said our guide Louisa Warman, who is from Britain and married to an Italian, thus raising three daughters on the Venetian Island of Lido. Warman led us on a tour with the chef Bogdan Antonescu from Uniworld River Countess, docked in the Port of Venice on the last day of our week-long cruise in the Venice lagoons. 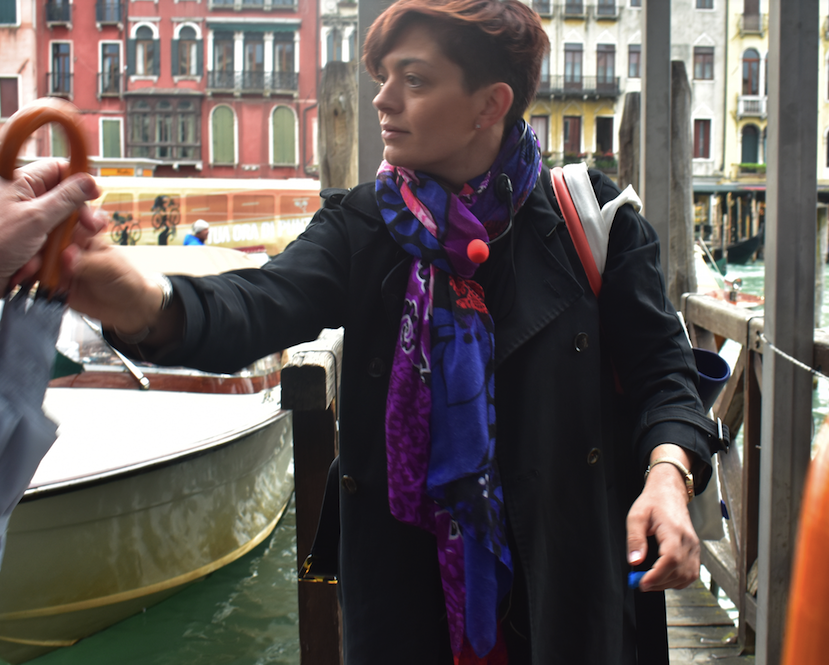 She explained that because Venetians typically don’t have cars—at least not in the city (some do, parked on the mainland) and because their apartments and refrigerators are so small, they must shop more frequently than once a week. Most people will shop before work and if they can’t take it to work with them, they’ll drop it off. “What you lose in efficiency, you make up in quality,” Warman explains.  “These guys know better than you.”

She notes that the produce may not be as “perfect,” as Americans are used to expecting—because there are a lot less pesticides used here, nor does it need to be preserved as it is used right away. “Italians eat what is in season and is fresh,” she said. 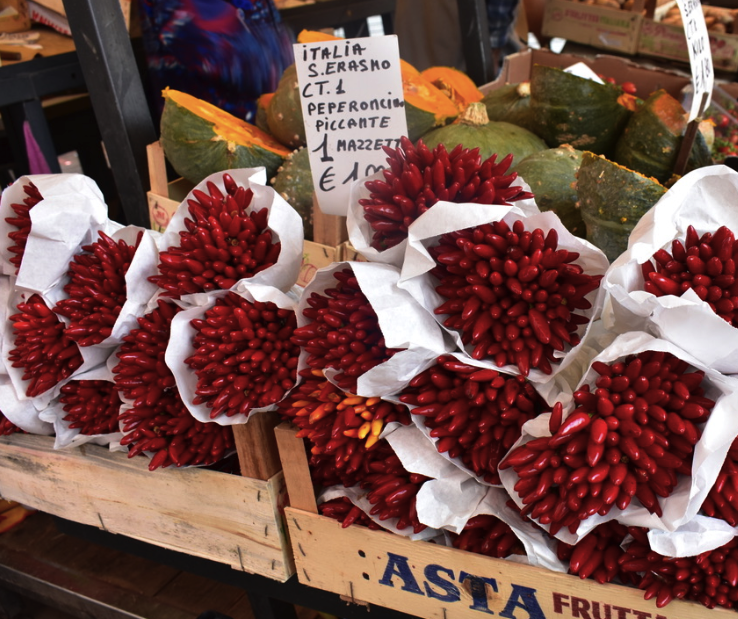 Besides not having a car, locals must navigate some 400 bridges, 118 islands   crowded with alleyways and the stairs in their apartments–no elevators!

By midmorning, the crowds across the famous Rialto Bridge are intense— like Times Square on a summer day –that’s because Warman explains, Venice is a city of some 54,000 people that welcomes 60,000 visitors a day—30 million a year. 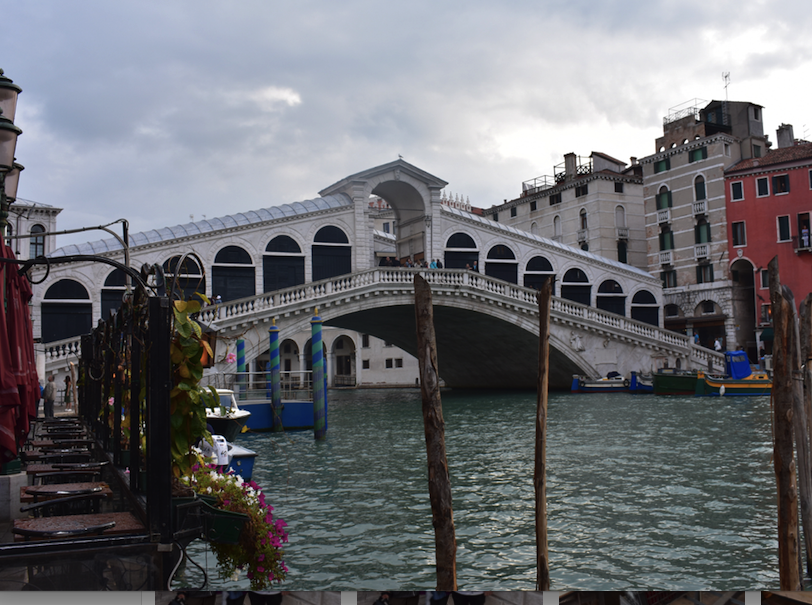 The Rialto Bridge dates back to the 16thCentury  with shops on each side just as they were then—a shopping mall of its day. Venice’s Rialto market has been here for seven centuries. We see all varieties of mushrooms, tomatoes, artichoke hearts,  red spicy peppers,  green lettuce, green pumpkins (orange on the inside), juicy green grapes, small oranges, red, yellow peppers…everything looks so fresh! 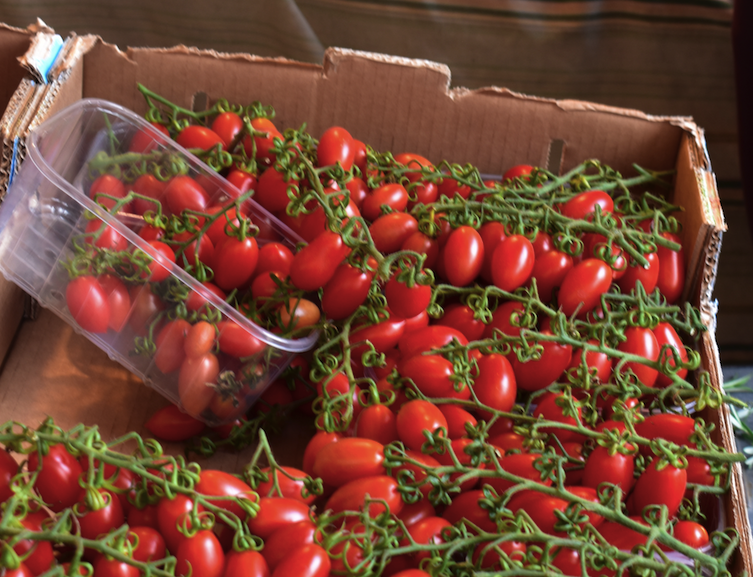 Delicious tomatoes at the Rialto Market

Indeed, much was harvested yesterday on a neighboring island and we see some being hoisted from boats that carry it to the market on trolleys to the individual stands.  Bay leaves and rosemary, just a little basil as it is now out of season, yellow pumpkin flowers (delicious we learn when lightly fried with cheese and anchovies),  giant red-and-white beans.

Chef Bogdan meets up with us, explaining that he has purchased what we will eat on board today and tonight right here—the difference is it will be delivered to our ship—live shrimp, calamari and octopus that are to be served up lightly fried at lunch; the tiny clams made into pasta vongole; the salads with the tiny tomatoes;  tonight their will be branzino for dinner and pasta with a tomato sauce, the tomatoes bought here. We sample those tomatoes and the grapes that decorate the buffet.

Sadly, we learn, the fish market is likely to be relocated as their simply aren’t enough customers. Many younger Venetians are moving from Venice proper to places where they can have more space and perhaps even a garage for a car. It is controversial, with posters declaring  “1000 years of history about to be thrown away…. Don’t touch Rialto!”

But it’s not that the fish market will be closed—just moved to where the huge wholesale fish market is located.

A late morning snack of prosecco and cicchetti

We stop for a mid morning snack—prosecco and a Cicchetti–a kind of tiny delicious bite—codfish salad, blue cheese and white melon, cherry tomato and burrata cheese, ham and assiago, on a small piece of baguette. I could get used to this!

Food, of course, is very important to Italians. “The best compliment you can pay someone is about their food—or their mother,” laughs Warman.  Conversely, insulting someone’s mother or their cooking is the worst insult ever. 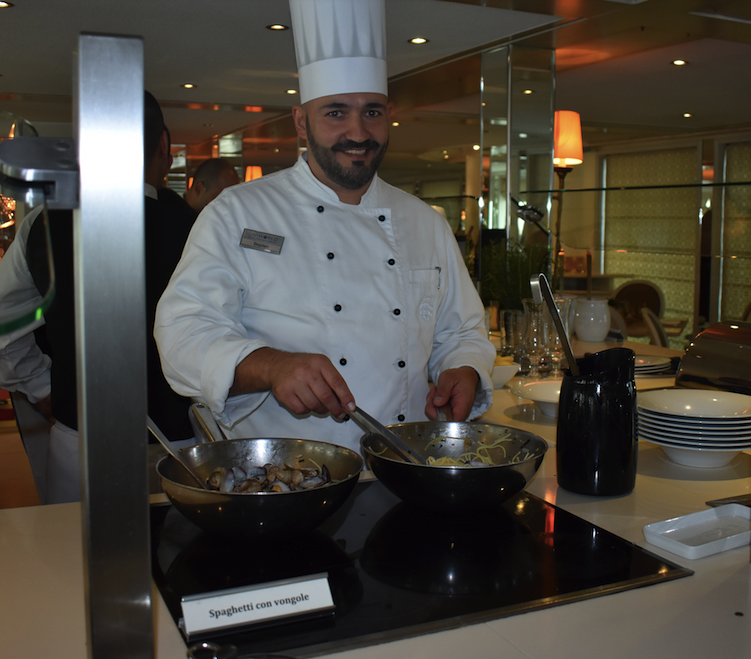 Good to know! At lunch aboard the Uniworld River Countess, Chef Bogdan is making pasta with the tiny clams bought at the market; he points out the frito misto with the calamari, shrimp and octopus  from the market.