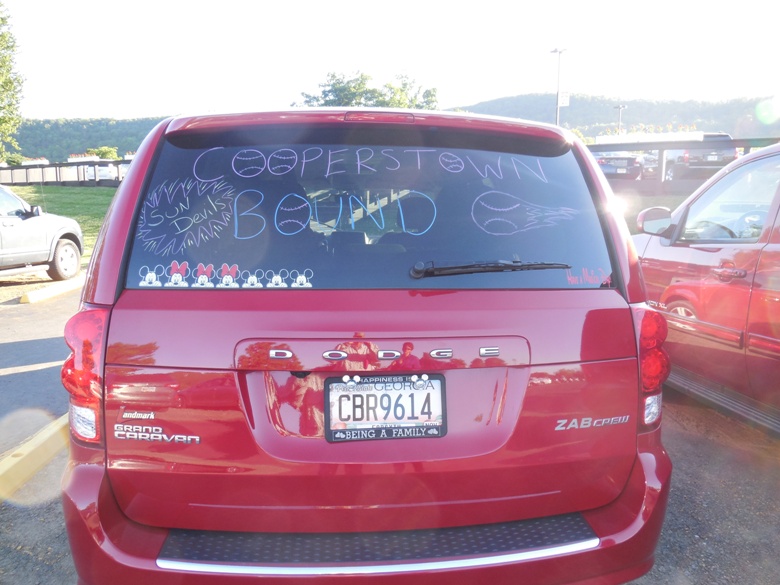 COOPERSTOWN, NY (Day 4 of 4) – Parents of the Cherokee Reds Little League team players from Canton, GA had been planning this week literally for years.

“The boys have been playing together since they were eight,” explained Dixie Harper.  “This was a goal.”

This is the Cooperstown Dreams Park, where every week more than 100 Little League teams comprised of 12 year olds convene for a week of baseball.  They come from  around the country –Florida and Texas, Pennsylvania, Las Vegas and Colorado, including this week, my cousin Ethan’s team—The Golden (CO) Hurricanes, coached by his dad Michael Sitzman.

But this isn’t just a baseball camp.  Not only are there more than 1,000 Little Leaguers here for a week but most bring parents, grandparents and siblings.  Of the players on the hurricanes, for example, 10 of the 12 players families have come, planning to make this trip to the East Coast a vacation including a stop in New York City or Boston.  Many have grandparents with them too.  They come from all 50 states and Canada.

“Playing here was an awesome experience—the best tournament I’ve ever been to,” said Andrew Mullen, who played here eight years ago and was back to watch his cousin.  “Being here is a real common denominator—everyone loves baseball.”

The boys competing this week liken the experience to a vacation without having to see their parents—or siblings too much—with the added plus of playing a sport they love surrounded by other boys who love the same sport just as much.

“The best part is meeting kids from all over the country,” said Luke Morningstar who is from Jacksonville, FL playing on the Julington Creek Stars. “It feels like camp because you are with your friends.”

“You get to play baseball every day and be free to have fun without having to do what your parents say,” agreed his teammate Colby Grant.

Of course there are rules—everything from having their uniform shirt tucked in to following the rules of the game and getting up on time for breakfast.

That’s what makes this week as much about learning life skills as baseball, says their coach Ray Wilkins.  Perhaps most important, he said, they have to take care of themselves—without Mom to lay out their uniform for them.

Some parents, for their part, rent houses; others fill Cooperstown’s hotels—all to watch the kids play ball all week on the 22 pristine, lighted fields spread out on 150 acres.  It’s a big commitment—in time and money—for the family to be here.

They’re here because they don’t want to miss the moment—when a 12 year old is crazy for baseball. “The best part was seeing my son’s smile.” Said Chris English, from Plant City FL.

His wife Lisa and daughter Cassidy could only spend a day here before leaving for cheerleading tryouts. “But it was too much to miss,” Lisa English said.

The players live in rustic bunks with their coaches for the week, playing seven games, eating together, trading baseball pins from around the country with their fellow players, having skills competitions.  Families mill around the expansive grounds just outside Cooperstown in between events, trading tips on what else they might do to keep younger—and less baseball-crazed—siblings happy.

All are glad they have made the effort to be here. “The best part was seeing my son’s face when we drove in,” said Brent Willis, whose son Morgan plays on the Franklin, TN Bombers. Their team has brought 45 adults and 20 siblings along for the ride.”

It all started with a family visit to Cooperstown and his father’s lament “Wouldn’t it be great if all kids could play baseball in Cooperstown,”  Louis Presutti Sr said, according to his son who founded the Dreams Park.

Cooperstown, of course, is where baseball began and is the home of the National Hall of Fame and Museum.  Louis Presutti Jr decided he would dedicate his life to bring his father’s dream to life.  “You have to have goals to achieve or your spirit will die,” he said at the opening ceremonies.

The park opened in 1996 and the week-long program is so popular that many teams are turned away every week.  This week there are 1300 players, 400 coaches and each team has brought an umpire.  With each player bringing his entire family, Cooperstown should be thanking Presutti for bringing more than 5000 tourists to town every week.

“I want you to thank your parents for allowing you to be here…and for your grandparents for teaching you manners,”  Presutti tells the assembled players at the opening ceremonies, complete with sky divers landing on the field with the American flag and moms and dads singing “God Bless America” and “America the Beautiful.”   Presutti reads off the names of three players who have since died serving in the armed forces.  Taps is played.

Presutti tells the assembled crowd that the park was built to honor his father and his grandmother, who loved baseball, watched her sons’ and grandsons’ little league games and sent five sons to fight in World War II. “My grandmother loved the game and the Red, White and Blue.” He said.  That’s why all of the uniforms are those colors.

“Let’s remember it’s a game,” he tells the boys—and their parents. “It is a game fought fiercely on these fields…but a game.”

The families are here for a good time—and a moment that won’t come again.

The Canton, GA Cherokee Reds had worked hard to get here, Dixie Harper said.  Now it’s time to enjoy it.

Besides, said Cathy Willis, “They’re only 12 once!”

The Golden, CO Hurricanes lost their first two games—more than half the teams here are all-stars, brought together from several teams just for this tournament.  The Hurricanes have been playing together all season.  They were disappointed but still in high spirits, heading back to their bunk house at twilight for a game of cards or maybe more pin trading before lights out.