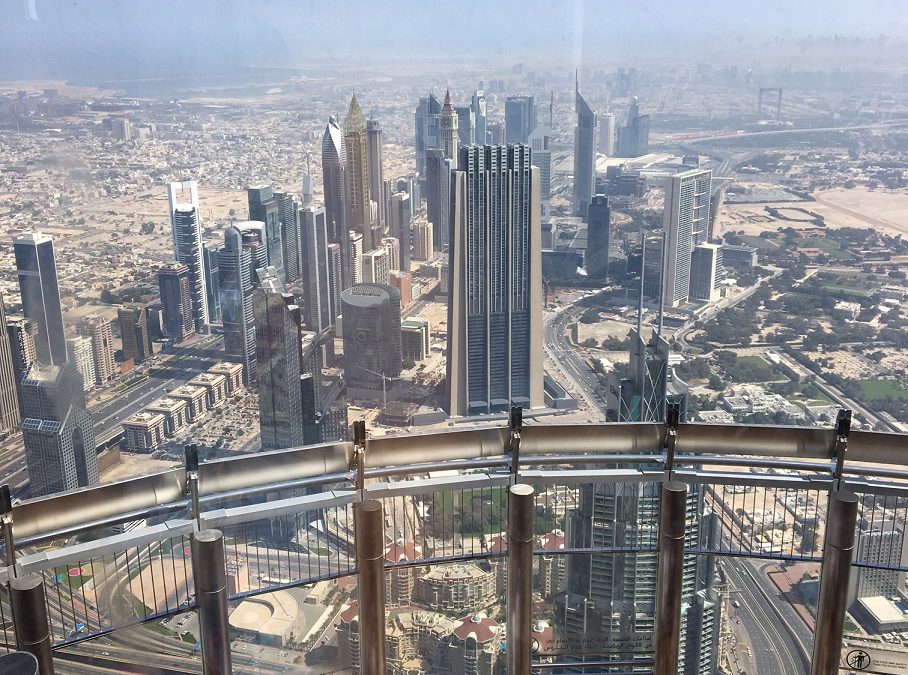 DUBAI, United Arab Emirates — The woman is busy taking selfies at the top of the Burj Khalifa in Dubai, the tallest skyscraper in the world – 2,716.5 feet and more than 160 stories. It’s distinctive thin shape and shiny silver color make it especially beautiful when lit at night. The Burg has become a symbol of modern Dubai.

But the selfie-taking woman was a symbol of sorts too — how centuries-old tradition coexists with a rapidly growing city. The woman was dressed head-to-toe in a robe-like black abaya, with only her eyes uncovered in deference to Muslim tradition which dictates that the entire female body should be concealed in public from males not related by blood. Yet she was busy with her iPhone as was everyone else, anxious to let their friends know they were at the highest outdoor observation deck in the world after having ridden the elevator with the longest travel distance in the world.

If weighed, the total amount of concrete used in the construction of the Burj would equal the weight of 10,000 elephants!  Sure it was spectacular but I couldn’t stop thinking about the coexistence of ancient and modern here and at the Dubai Mall, which, by the way, is the largest mall in the world, complete with the Dubai Aquarium and Underwater Zoo, one of the world’s largest aquariums (over 33,000 animals and a walkthrough tunnel!),  an Olympic-size ice rink, waterfalls, 1,200 retail outlets, many restaurants and cafes (everything from Five Guys to Fortnum & Mason), 22-screen cinema. Outside, the Dubai Fountain has choreographed a 5-minute “water show” on the Burj Khalifa Lake in downtown Dubai, between the Dubai Mall and the Burj Khalifa (there are shows in the afternoon and every half hour in the evenings).

Every store you can imagine is in the mall from top designers like Alexander McQueen and Versace to bargains like H&M, which are right near shops selling traditional abayas. There are electronics and eyewear, shoe stores and those selling cosmetics, home furnishings and jewelry, even a separate denim area. There is an indoor-outdoor area under a retractable roof.

Everywhere were fashionistas and families, many of the women and men dressed in traditional garb.  Unlike shopping in the USA where it is all about the bargain, here shoppers are paying retail.

A totally different scene plays out at the souks of Old Dubai (a visit to the Dubai Museum is a good way to get an introduction to the city’s history). Take a traditional Abra boat across Dubai Creek (the cost is about 30 cents) here at the original center of Dubai’s commerce. There’s the Gold Souk, Spice Souk with all varieties of curry and other spices piled outside the shops and the Textile Souk with every variety of silk, cotton and embroidered fabrics. This is a place you may want to wander and inevitably get lost if the aggressive shop keepers don’t harass you too much. “Obama country!” they welcome Americans, begging you to come into their shop.

It is chaotic and hot. With the small one-room shops packed floor to ceilings and the narrow, twisting pathways, this couldn’t be more different than the sleek Dubai Mall. There seem to be more locals than tourists, perhaps doing their weekly shopping

Later that night we are  back in the 21st Century at The Dubai Fountain after dark, eating dinner outside  at Thiptara, an upscale Thai restaurant overlooking the fountain as water shoots high up in the air, zigging and zagging, all coordinated to music and lights. Beautiful!

As I watch, I think about the souks—time travel just by crossing the city.