Early American history comes alive in and around Philadelphia 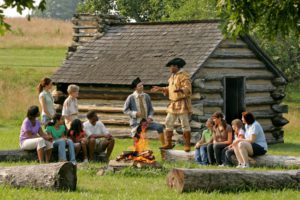 Familes gather to learn the history of Valley Forge

More than 30 recruits stand at attention, arms at the ready.

“They may be young but they are brave,” observes the sergeant training them.

Very young — some not even in kindergarten yet, some who don’t know their right from their left when the sergeant commands them to turn.

“Hip, Hip Huzzah!” the crowd cheers as the group is inducted into the Continental Army.

That’s right. The Continental Army. Here in the heart of historic Philadelphia on a steamy summer day, we’ve time traveled back to the heady days of the American Revolution, the drafting of the Declaration of Independence and the making of Betsy Ross’ famous flag sewn at the request of General George Washington — all right where it all happened — thanks to 30 terrific costumed “History Makers,” as well as 40 first-rate storytellers from the nonprofit Historic Philadelphia organization stationed at 13 “Once Upon a Nation” benches throughout what’s called America’s Most Historic Square Mile, all working hard to make American history much more than a bunch of dates to visitors — whatever their ages.

“Who is brave enough to join our fight,” “Major David Salisbury Franks” bellows at the growing crowd in Signer’s Garden — much as we imagine he really did when General Washington was badly in need of more recruits — before they are marched to a nearby grassy area to “train” with wooden muskets.

“This does make history fun,” offered 10-year-old Caitlan Tsarouh, visiting from Oregon with her grandparents and cousin, also an eager recruit.

“A great way for them to remember history,” adds Gail Brown, visiting from Georgia whose son and daughter are among the army recruits, while their younger brother watches. “This makes for good memories,” she added.

That’s the idea, of course. And it’s all free all summer long — which isn’t the case when visiting some of the country’s stellar living-history museums like Mystic Seaport in Connecticut, Connor Prairie in Indiana and Colonial Williamsburg in Virginia.

And this summer, as the nation commemorates the 150th anniversary of the start of the Civil War, there are also Civil War-era stories (hear the tale of Henry “Box” Brown who escaped to freedom in 1849 by mailing himself to Philadelphia in a wooden crate), Civil War-era History Makers (among them 19th-century civil rights leader Octavius Catto, killed the day he cast his first ballot) and special exhibits like “Rally ‘Round the Flag” about the Civil War color bearers and the flags they carried at the Betsy Ross House. (Visit Fourth of July weekend and there will be an entire weekend of Civil War activities, as well as the city’s Wawa Welcome America! Festival.)

You will also find free programs outside the city, too, at Valley Forge, the site of George Washington’s brutal winter encampment, as well as in Philadelphia’s historic area, where you may have the chance to meet and greet History Makers Ben Franklin, Betsy Ross, Thomas Paine, Thomas Jefferson, George and Martha Washington and other luminaries from their era who might not be as well remembered, including John Dunlap, he printed the first broadside of the Declaration of Independence, which was used when it was first read aloud to the public, and Rebecca Franks, a loyalist (a third of Philadelphians were loyalists) who later married a British officer and moved to England.

Independence National Historical Park, where you’ll find some of the storytellers and History Makers, is, of course, where you’ll see the Liberty Bell (there was a line out the door the day I visited recently), the President’s House Site, where George Washington and John Adams lived and worked, Declaration House, where Thomas Jefferson crafted the Declaration of Independence, and more. (You can get advance online tickets for $1.50 for Independence Hall.

Stop in at Visitor Center and pick up a Junior Ranger Activity Book for the kids to use as you tour the sites. You might meet a colonist who can show you how to make rope or play an 18th-century instrument. Get a flag from one of the storytellers and add a star to the circle of 13 stars for each site you visit. (Kids get a free ice cream when they’ve gotten all 13 stars on their flag.)

Take time for a short film told from a kids’ perspective on whether they wanted to remain loyal, rebel against the king of England or just weren’t sure (a third of Philadelphians were undecided). Check out Ben Franklin in 3-D during the 15-minute “Liberty 360” show at the Historic Philadelphia Center. It just opened last fall.

The kids will lead you from storyteller to storyteller because this outstanding crew — actors, teachers and even opera singers — don’t just tell stories they perform as if on stage, even belting out songs. We hear how the bald eagle, and not the turkey, came to be the national bird and how some Continental soldiers thought they were about to confront a ghost, only to discover it was a white horse that had somehow wandered inside and up the stairs of their barracks. In Elfreth’s Alley — America’s oldest street in continuous use — kids discover that the very first Fourth of July celebration was held in Philadelphia in 1777.

The littlest history buffs — or those you’d like to become history buffs — can sign on for the special “Valley Forge Secrets & Spies Tour” where General Washington enlists children to join his American Spy network to uncover traitors, learning 18th-century spy techniques in the process (yes, they did use invisible ink). While in Philadelphia, join the Colonial Kids Quest in which kids must help find the missing Declaration of Independence with a dog by the name of Freedom. (There is also an adult-oriented evening dinner program, complete with the chance to eavesdrop on the Founding Fathers in Independence Hall.) The extra fee seems well worth it.

When you need a break, head over to Franklin Square for a burger and shake at Square Burger, ride a carousel (did you know Philadelphia was the center of the carousel industry?) or play a round of mini-golf amid mini Philadelphia icons.

Don’t try to see everything in one day either — not when Philadelphia hotels are offering a new Overnight Hotel Package at $198 for two nights, including parking, which otherwise could cost up to $75, and a special teddy bear.

There’s just so much history a kid — or grown-ups — can take at one time, after all.

Marching, either. Aaron Lawson, 10, said when his enlistment was over, he’d trade his wooden musket for the hotel swimming pool.